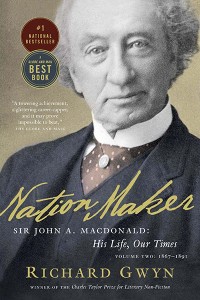 In Canada, a country that treats its history as if it were a ball-and-chain (far from the head and heart), few history books will make “top” lists. It is not surprising, because the market has practically dried up. Six provinces have long stopped teaching the subject in schools. Removed from the culture, few people seem to want to buy history books. The big publishing houses have all but abandoned Canadian history. The end product is a diminished culture that greets old and tired ideas as new again, and can’t tell the difference.

This makes Richard Gwyn’s achievement all the more remarkable. His two-volume biography of Macdonald appeared at a time when no audience for it was guaranteed, yet it won a grateful readership and then a number of non-fiction awards.

The long story begins in a modest apartment in Glasgow a few months before Napoleon is finally defeated at Waterloo, and ends in a splendid prime minister’s home on the Ottawa River 76 years later. The first volume’s shamelessly exaggerated claim that “John A.” was the “Man Who Made Us” inevitably sticks in the craw of any feminist and non-Anglo, but Gwyn musters his history on that nation-maker theme to great effect.

Even Gwyn will agree that Canada cannot be seen as the product of just one man, but what he wants to draw out is that it was Macdonald who, at various critical junctures in the 19th century, had the guts and the imagination to ensure that a certain world view dominated all others. In the two volumes, Gwyn guides the reader through events, debates, conjunctures and critical turning points. Sometimes he speculates on motive; other times he boldly asserts the propriety of Macdonald’s decisions. He lands on something in drawing distinctions between Macdonald and his great adversary in the 1860s, fellow Scot and immigrant George Brown, who was, in practically every, way a match to the great Tory. Among men, women and politicians of all stripes, Macdonald was in a league of his own even after Confederation. The fact that he was elected six times (never equaled) from 1867 until his death in 1891 is something that cannot be dismissed.

Gwyn had soured on Canada’s prospects during the 1990s. But for more than a decade now, his weekly columns in the Toronto Star have encouraged his readers to recognize what he considers the astonishing success that Canada has become. Gwyn wrote the second volume with his mind in the present. He sees today’s Canada as the almost inevitable product of Macdonald’s plans and ambitions. If Canada can boast of a comparatively well-adjusted multiculturalism, it is because Macdonald had planted the idea that Canada had to welcome immigrants—even if the Chinese were subject to terrible discrimination. If this country was comparatively fairer to indigenous people, it was (at least in part) due to Macdonald, who cast off prejudice and simply wanted “Indians” to become modern citizens of the country: educated, industrious and independent. If that meant assimilation, so be it. If it meant death for Riel and his closest allies, so be it also. Stubbornly, Gwyn presents Macdonald as a progressive. Drawing on findings he gathered in dusty academic theses and a rich variety of primary and secondary sources, Gwyn saw an enlightened man on a variety of issues, not least those relating to women and indigenous people.

Crucially, this applied to the peace and understanding between English and French that Macdonald aimed to forge. When mentioning the influence of George Étienne Cartier, Gwyn points to Wilfrid Laurier, Henri Bourassa, Pierre Trudeau and René Lévesque. “Cartier’s near disappearance from the memory of his own people isn’t justified by the legacy he left them,” he wrote in the first volume. It turned out Cartier’s disappearance was not “near”—it was total. The only observance of his 200th anniversary in the fall of 2014 was a quiet luncheon organized by Prime Minister Stephen Harper at the Citadelle in Quebec. No one in Quebec’s elite seemed aware of the occasion. John A.’s own 200th anniversary in January 2015 was also largely ignored, but it was feted at large dinners in Toronto, Orillia, Ottawa and Winnipeg. No tax dollars needed.

The success of the events in Ottawa and Toronto were indirect testaments to the success of Gwyn’s two books. They stand as an English immigrant’s ode to an earlier Scottish immigrant, both seeking something new, something great, in this country. Gwyn argued that Macdonald deserves high praise; Gwyn deserves no less for telling the story so well.

Patrice Dutil
Patrice Dutil is the founder of the LRC and was its editor from 1991 to 1996. He is now professor of politics and public administration at Ryerson University. His most recent book is a co-edited volume, John A. Macdonald at 200: New Reflections and Legacies (Dundurn, 2014).