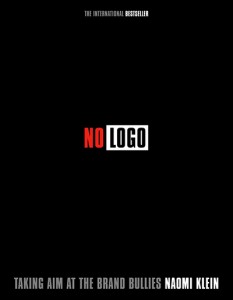 Few Canadian writers have written a debut book in any genre that resonated internationally like Naomi Klein’s No Logo, a thoroughly researched and exquisitely timed denunciation of corporate globalization (otherwise known as neoliberalism). First published within weeks of the watershed “Battle in Seattle” protests of December 1999 against the World Trade Organization, No Logo made the young journalist from Toronto a star of sorts in the self-consciously non-hierarchical activist circles of what was then known as the global justice movement.

Hailed or derided as a “bible” or “manifesto” of incipient worldwide rebellion, No Logo was in fact neither. It is, above all, an ambitious work of literary journalism. In her introduction, Klein describes No Logo as a “book of first-hand observations” that gives voices to the activists working to expose “the widening economic divide” beneath the “high gloss façade” of global capitalism.

Perhaps the first hint that Klein was really on to something was the severity with which her critique was met by her ideological opponents. The Economist wrote an infantile rebuttal focusing on the writer’s age, “Why Naomi Klein needs to grow up,” which included one of the most patronizing phrases in the history of journalism: “for an angry adolescent, she writes rather well.” (Klein turned 30 the year No Logo was published.)

Several other mainstream publications have, over the years, resorted to ad hominem barbs in their attempted takedowns of Klein’s work. Sometimes it seems professional jealousy is at play—a leftist who can write bestsellers is a rare combination—but perhaps it’s also a reflection of the meticulousness of her research and reporting.  No Logo was the product of years of travel, investigation and reflection, and this set the pattern for Klein’s career as a public intellectual. With both The Shock Doctrine, which took on “The Chicago School” of neoliberal economics, and This Changes Everything, her wide-ranging look at the forces leading us to climate catastrophe, Klein spent years immersing herself in her topic before producing a creative synthesis.

That No Logo was greeted so scornfully by many guardians of the status quo only raised her standing among activists who came of age politically during the years of the Seattle protests and the subsequent street battles in Quebec City outside the Summit of the Americas. Other than those brief media spectacles and flashpoints, radical voices in those days were at the margins of the public sphere. That’s another reason No Logo was so influential. The book’s success legitimized what was then a radical point of view and to some extent compelled producers to put the author in front of the cameras; Klein’s quickness of mind and polished media presentation skills amplified the message of the global justice movement beyond just the streets.

In one sense, the themes dealt with in No Logo—sweatshop labour and anti-corporate campaigns, deindustrialization and corporate trade deals, growing inequality—were quickly eclipsed by the “War on Terror” in 2001 and the subsequent wars and occupations in the Middle East. The horrors unleashed by the invasion of Iraq, with its millions dead or displaced and the vicious sectarian killing fields from which ISIS has emerged, have perhaps to some extent obscured the ongoing toll that corporate globalization has taken worldwide.

Written at the end of the 1990s, a decade of unprecedented market triumphalism, No Logo was bold, provocative—and prescient. More than 15 years and one historic global financial market collapse later, we see that it was No Logo’s critics who were naïve and child-like in their faith in unfettered global capitalism.

Derrick O’Keefe
Derrick O’Keefe is a co-founder of and editor with Ricochet. He is the author of several books, including Michael Ignatieff: The Lesser Evil? (Verso Books, 2011) and A Woman Among Warlords (Scribner, 2009), co-authored by Afghanistan’s Malalai Joya.