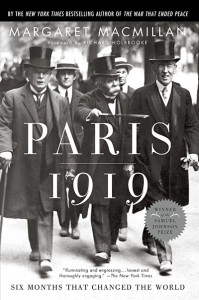 I vividly recall my first encounter with Margaret MacMillan’s Paris 1919. I was a 17-year-old high school student, craving knowledge of the world beyond my rural Alberta existence. Under the Christmas tree that year, I found a Canadian woman writing about the history of international affairs and winning accolades for it—from the Governor General’s Literary Award to the BBC Samuel Johnson prize. As I devoured Paris 1919, my initial intrigue quickly turned to absolute delight.

More than many other historians, MacMillan masterfully weaves together the great forces of an age in interplay with individual actions to reveal why and how the world changed. Though MacMillan’s international lens remains primarily focused on the major leaders of the post-WWI conference—American president Woodrow Wilson, British Prime Minister David Lloyd George (of note is that MacMillan is his great-granddaughter) and French Premier Georges Clemenceau—Canada is not left out of its narrative.

This was the period of “growing up” among many of Britain’s dominions, as MacMillan puts it. There would be no more “tip-toeing reverentially” around the mother country after the bloodied WWI battlefields had given root to nationalism in Canada, Australia, New Zealand and South Africa. But as exemplified in the six long months of negotiations around establishing order in the post-WWI world, this would be nation-alism and sovereignty realized through politics and diplomacy, rather than further armed conflict. Canada, in particular, shone as the “senior dominion” within the British Empire.

Sir Robert Borden rarely comes up in discussions of the “greatest 20th century prime ministers,” let alone “greatest” Canadians.” Yet, as MacMillan describes, it was Borden who led Canada’s delegation to the Paris Conference and it was his leadership that led to Canada’s full representation at the meeting. He exercised a distinctive voice that would earn Canada a seat at the League of Nations. It was only a start for the international debut of Canada as Canada, but a critical one.

MacMillan’s prose is a truly engaging marriage of scholarship and storytelling. MacMillan and her book have crossed my mind again as I enrolled in university courses on international relations, the United Nations, and war and conflict. I am not alone, no doubt, among my generation of university graduates to be inspired by Margaret MacMillan and her research.

MacMillan’s influence also stretches far beyond the generations of students she has taught at Ryerson, the University of Toronto and now Oxford. Through her public lectures (for example her 2015 Massey Lecture in 2015, her Bluma Appel Lecture in 2016) and timely op-eds in the New York Times and Globe and Mail, she continues to bring forward the insights and warnings that history can provide as we chart a path in our complex world. Whether on Putin’s Russia and the Crimean crisis or Brexit and the future of Europe, it is always worth reading what MacMillan has to say. Paris 1919 remains a shining example of her work.