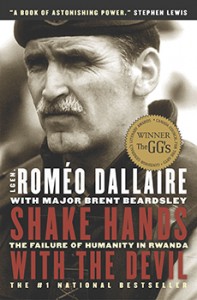 Roméo Dallaire’s central theme about the Rwandan genocide, where 800,000 souls were hacked apart by machetes, is simple and compelling: “Never again,” he writes, should the world turn its face away while unspeakable cruelties are visited upon defenceless people. Dallaire was Commander of the United Nations mission in Rwanda from 1993 to 1994, and his account of how his cry for reinforcements to stop the slaughter was ignored by the UN Security Council and the western powers is searing in its honesty. “We watched as the devil took control of paradise on earth and fed on the blood of the people we were supposed to protect,” he writes. Intended initially as a document for his children to understand why the confident father who left for a routine peacekeeping mission in 1993 was not the same father who returned broken in 1994, the book is a personal, almost daily record of brutality, frustration and disillusionment. No reader is left untouched by the description of what actually happened in Rwanda, nor by what witnessing such atrocities did to one honest Canadian.

An award-winning book needs both message and style. Shake Hands with the Devil passes these tests admirably. Dallaire’s message is more than a modern-day version of Émile Zola’s J’accuse…! True, despite Dallaire’s frantic efforts to warn the Security Council about what was occurring in Rwanda, his missives were ignored until it was too little and too late. Even as he documents the world’s refusal to take action, Dallaire’s main purpose is to study how the genocide happened, “not from the perspective of assigning blame—there is too much to go around—but from the perspective of how we are going to take concrete steps to prevent such a thing from ever happening again.” The 2005 World Summit responded to the cri de coeur of Daillaire’s “Never Again” by adopting the international norm of the Responsibility to Protect (R2P).

Canadians are not often at the centre of earth-shattering global events. It is one of the blessings of being a Canadian that we have been spared most of the world’s miseries. When he accepted a UN commission to the little-known African country of Rwanda, Dallaire didn’t know that he had stepped into the epicentre of a budding holocaust. There is a dark side of human nature that can burst forth to do unspeakable harm and it is a particular feature of the 20th century that it has repeatedly spawned genocides. Using spare prose, without histrionics, Dallaire describes the horrors he witnessed, and his quiet style makes a reader shudder all the more:

Many people had been killed and thrown in the ditches and both sides of the road…I looked at the bodies, which seemed relatively fresh. Just as I glimpsed the body of a child, it moved…I leaned down to pick the child up, and suddenly I was holding a little body that was both tingling and mushy in my hands. In a second I realized that the movement was not the child but the action of maggots.

Shake Hands with the Devil is a first-person account of how human evil was allowed to escape the constraints of civilization. To avoid the horrors of the 20th century it must be the mission of the 21st to make the R2P a reality. The way will be hard and slow but Romeo Dallaire shows why it is essential for the world community to put the devil in chains.