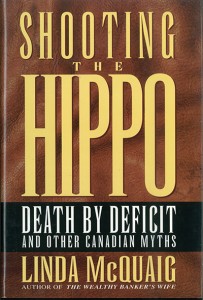 Shooting the Hippo tells the story of how neoliberal elites manufactured a 1990s deficit crisis to justify their call for massive cuts to Canada’s social programs. The book received huge public attention. It stood atop The Globe and Mail national best-seller list for ten weeks, and remained on the list for 26 weeks. It was shortlisted for the Governor General’s award.

The book helped reshape public opinion about deficits and the austerity agenda, exposing the truth about deficit hysteria campaign. Readers were introduced to memorable voices of sanity: Vincent Truglia, the senior Moody’s analyst, who complained that Bay Street was constantly pressuring Moody’s to lower Canada’s credit rating, presumably so that the Canadian public would accept deep social cuts; Hideo Mimoto, the Statistics Canada analyst whose study—showing that social spending had not ballooned, and that the lion’s share of debt growth in the preceding decade was due to the rising cost of interest payments—was suppressed by Statistics Canada’s Finance department.

Shooting the Hippo exposed the radical monetary policy views that had become dominant inside the Bank of Canada under governor John Crow, showing that, by adopting a low inflation policy, Crow was essentially turning Canada’s economy into “a laboratory for an experiment never before conducted in any major country in the world.”

The book served as an antidote to the conventional wisdom. It was an inspiration to the Canadian Centre for Policy Alternatives’ Alternative Federal Budgets (AFB), starting in 1995, which sought to demonstrate concretely how governments could address Canada’s economic challenges without resorting to massive program and tax cuts.

Nevertheless, while dramatically easing monetary policy, the Liberal government launched a brutal attack on federal programs including social spending, which reverberated to lower levels of government, and resulted over time in a much-diminished Canadian state.

The Liberal government loosened up on austerity during the 2000s. However, the Harper Conservatives aggressively renewed the austerity drive after the 2008-09 global economic crisis.

Accompanying the program cuts,successive rounds of tax cuts, continued enthusiastically by the Harper Conservatives, reduced overall government fiscal (revenue raising) capacity by almost  $100 billion per year from what it was in the late 1990s.

The effects of the austerity legacy of the last 25 years—ballooning wealth and income inequality, a frayed social safety net, wage stagnation and job insecurity, entrenched poverty and marginalization—cannot be overstated.

A revelation for the many Canadians who read it, Shooting the Hippo should be recognized for its unique insights into these theories and policies, which have done so much damage to the Canadian welfare state.

Perhaps an indication of the book’s lasting impact on public opinion is that during the last federal election, Canadians, unconvinced by the austerity rhetoric of financial elites and their funded think tanks, were receptive to Liberal proposals to run deficits to spur employment and make critical social and other public investments.

Bruce Campbell
Bruce Campbell is the past executive director of the Canadian Centre for Policy Alternatives. He is the author of numerous articles and reports on national and international public policy.