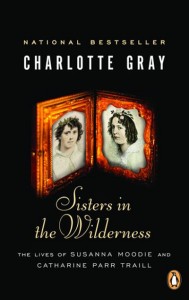 Part of a proud tradition of “revisioning” history, Sisters in the Wilderness: The Lives of Susanna Moodie and Catherine Parr Traill is a deeply satisfying read, an intimate portrait of two distinct but intertwined lives that were foundational in Canadian letters. The sisters’ most lasting works—Moodie’s Roughing It in the Bush and Traill’s The Backwoods of Canada—contributed to the shaping of a nation, both through the transmission of practical knowledge and, perhaps more importantly, through the creation of distinctly Canadian stories. Author Charlotte Gray takes care to consider each of her subjects as a whole, balancing Moodie’s strength and passion with her bloody-minded arrogance, and tempering Traill’s endless supply of loving kindness with her overly simplistic faith. The wider world swirls around the two sisters—Gray knows her history with a capital H—but events such as Queen Victoria’s ascension to the throne and Canadian Confederation take place in relation to the personal stories that form the narrative’s core.

Sisters in the Wilderness focuses unapologetically on the female experience of pioneer life in Upper Canada—crucial work when, even today, an internet search on the term “forefathers” yields upwards of 7,000,000 results while “foremothers” garners a mere 300,000. This shift in perspective is plain in Gray’s treatment of “women’s work”—notably the dangerous business of childbirth. In addition to the “exhausting cycle of pregnancies and births” and the endless toil of keeping house, Gray charts a dramatic round of illnesses, accidents and stretches of desperate privation. Both Moodie and Traill buried children in the soil of the New World, and Gray captures this painfully naturalizing right of passage in stark and moving detail.

Much as the two sisters identified as mothers and wives, they also conceived of themselves as writers—a vocation that helped determine how they found and forged meaning in their lives, as well as how they struggled to keep their families afloat. Gray has clearly done her research: one has the impression of her sifting through reams of source material until she felt she could write the sisters’ lives from the inside out. Throughout the book, however, one also senses a current of personal insight. The celebrated author of nine books of literary non-fiction, Gray clearly shares her subjects’ dedication to the writing life; what’s more, as a mother of three, she too must have learned to balance that life with the demands of the home. Having come to Canada from England herself, she also possesses a first-hand knowledge of an immigrant’s outsider point of view.

Unlike the sisters whose lives she chronicles, Gray resides in Canada’s capital city at the heart of literary and historical circles, and is the recipient of countless awards and honours for her work (Sisters in the Wilderness alone won the Floyd S. Chalmers Award in Ontario History and the Canadian Booksellers Association Award for Best Non-fiction Book). Regardless, she imagines herself deep into the lives of her subjects—women who, despite periods of recognition, never achieved a level of literary success that could guarantee either financial independence or a sense of having “arrived.”

In the end, this is the core strength of the book. Sisters in the Wilderness may be scholarly in the depth of its research, but it is also a triumph of the writerly imagination. Within its covers, the reader comes to know a pair of remarkable women as complex and compelling as any fictional heroine. Moodie and Traill may be long gone from this world, but thanks to Gray, their lives continue on the page.