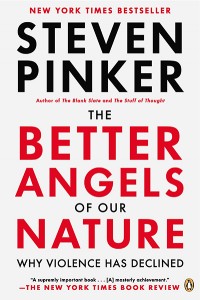 Steven Pinker writes like a dream, luckily for us, because he is examining some of the most important questions facing humanity today. A professor of evolutionary psychology at Harvard who has been named one of the world’s most influential intellectuals, his vast subject is human nature itself

In his 2011 masterwork, The Better Angels of Our Nature: Why Violence Has Declined, Pinker examines whether we have become less violent as a species over time. Across 800 pages of narrative, graphs, scientific studies, history, cognitive science and philosophical conjecture, he argues that human nature contains motives that impel us to both violence and peace.

His conclusion—that we are becoming less violent—may seem counter-intuitive as we observe what appears to be escalating violence in the world. Pinker contends that a study of the past indicates that our era is effectively less cruel than any other in human history. For example, skeletons found at archaeological sites reveal that 15 percent of prehistoric humans met a violent death. These numbers decreased exponentially over time. Even during the exceptionally bloody periods of Europe’s 17th and 20th centuries, the number of deaths in war amounted to just three percent of the population.

He credits what he calls the “Civilizing Process” with several factors. First, the emergence of the state means that leadership consolidated power and curbed violence by providing security and enforcing the rule of law. (Societies without an effective Leviathan have remained anarchic; open democracies have been the most successful.)  And settled states trade, which also enhanced pacification. The rise of cities demanded stricter codes of personal conduct, which in turn required greater self-control. Enhanced literacy led to higher levels of empathy—the ability to understand that the experience of others may mirror our own. This, among other evolutions, led to the “Long Peace” and to the rights revolution, both of which followed in the aftermath of the Second World War.

Finally, Pinker credits reason itself with lessening violence. He argues that psychological experiments consistently demonstrate that we are better at abstract reasoning than we used to be, and that this faculty—the ability to think about the consequences and implications of both individual and collective violence—is the ultimate pacifier.

In my own work as a writer, I’ve asked many of the same psychological and philosophical questions as Pinker. My own explorations have introduced me to both the perpetrators and the victims of puzzling violence, and to those places in the world where conditions have triggered the wired and learned behaviours Pinker records. But while admiring this work, I’m left with some doubts. Are we really better at abstract reasoning than, say, the ancient Greeks, whose thinkers mapped out the intellectual foundations of the West? Or better than the inhabitants of Arab Andalusia, who invented the basis of mathematics as we know it more than a thousand years ago? I suspect that we have not evolved in this critical sense, but that extended periods of stability have allowed “the better angels of our nature” to prevail. These would include the Long Peace after the war, during which the international community created protective institutions such as the United Nations and the International Criminal Court.

I imagine that Steven Pinker’s Canadian origins may have shaped his interests. Born in Montreal in 1954, he lived through the Quiet Revolution as it exploded into violence. In the early 1970s, he would have observed how Canada pacified the escalating crisis by creating dual regimes of official bilingualism for Quebec and official multiculturalism for everyone else. These reasoned, pragmatic solutions to violence may have triggered broader questions in his mind.

Whatever the root of his work, The Better Angels of Our Nature is a must read for anyone struggling to comprehend the historical trajectory, and psychological underpinnings, of violence. Canadians may be proud of Steven Pinker’s contribution to our understanding.

Erna Paris
Erna Paris is the author of seven acclaimed works of literary non-fiction. Her most recent work is The Sun Climbs Slow: The International Criminal Court and the Search for Justice (Penguin Random House, 2008).