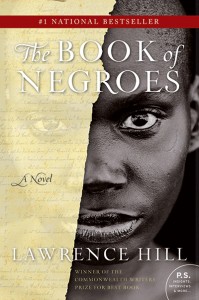 Lawrence Hill’s The Book of Negroes delivers exactly what we look for in the best historical fiction. It takes us into the life of a compelling character caught up in the dramatic events of the time and through that lens allows us to absorb those events with a visceral kind of understanding. This is the power of good fiction. As readers we identify with the protagonist, and through that we find empathy and a little bit of comprehension of a life far removed from our own.

The book takes its title from an actual historical document: the British Navy’s list of 3,000 blacks who served on the British side during the American Revolutionary War and who, at its end in 1783, fled Manhattan for Nova Scotia. As Hill notes, unless you were in the Book of Negroes, you could not escape to Canada.  Through an intimate portrait of the life of one remarkable woman, Aminata Diallo, Hill shines a light on this forgotten chapter of Canadian history in the context of a sweeping story that encompasses three continents. It is a telling story that helps to illuminate how Canada was implicated in the history of slavery and its aftermath in North America.

The story begins in the second half of the 18th century, during what, in an entirely different context, is called “The Age of Enlightenment.” Eleven-year-old Aminata Diallo is separated from her mother, a midwife, and abducted from her West African village. After having been marched to the coast, she is stowed on a ship like cargo and taken on the notorious Middle Passage. On arrival in America, Aminata is sold into slavery on a plantation in South Carolina. She is abused, then sold away from husband and child, and taken to Manhattan by a new master. There, during the confusing early days of the American Revolution, she escapes to freedom, supporting herself with her skills as a midwife and by her closely guarded ability to read and write. Taking ship for Canada with the British at the end of the war, she discovers life for freed Loyalist slaves in Nova Scotia to be harsh and oppressive. She returns to Africa with a group of other freed slaves, in what turns out to be a harrowing failure to build a new life of liberty in the new town—Freetown, Sierra Leone—that the free blacks from Nova Scotia establish.  Abandoning Africa, she accepts passage for London, where she is taken up by the British abolitionist movement, for whom she becomes a powerful spokesperson.

The fictional story is built around a framework of historical fact that surprises and appalls.

The title of the book itself caused some visceral reaction. To me it has the whiff of history about it; there’s something antique in the usage. But the title resonated badly in the United States where the term “Negro” can and does ring as deeply offensive, so much so that Hill’s American publishers chose to publish it under an alternative title: Someone Knows My Name. Even in Europe, an irate reader confronted Hill and announced, “Sir, I will burn your book.” These reactions are themselves like a modern postscript to Hill’s story. They demonstrate in a small way how the history of slavery and racism continues to play out in the present day and, ironically, demonstrates just how important telling the story of the Book of Negroes—and engaging the understanding and empathy of its readers—really is.

I met Larry Hill in 2007, the year The Book of Negroes was published. It was at the annual summer Couchiching Conference, built that year around the theme “The Stranger Next Door: Making Diversity Work.” In our brief conversation at lunch, I was impressed with his approachability and his essential friendliness, and the fact, which we quickly discovered, that he had even more children than I do: his five to my four. Or perhaps I should say rather, his six to my four, because, as he has said, he thought of the young Aminata Diallo as his daughter, and throughout the writing of the brutal experiences suffered by that young girl, found it tormenting work. I empathized.

And maybe that’s the greatest accomplishment of Larry’s book. A great work of fiction like this can, perhaps, help us make our diversity work, through immersing us in the stories of others, engaging our imaginations, our empathy and our task of comprehending. It can take us there by teaching us to know the history, and to feel the humanity, of that stranger next door.