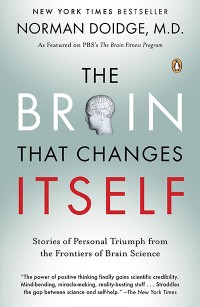 The late Dr. Oliver Sacks called The Brain That Changes Itself “a remarkable and hopeful portrait of the endless adaptability of the human brain.”

Countless books have been written on the brain in the past two decades, but none can match Dr. Norman Doidge’s for its range and its ability to make tangled neurological concepts accessible to the ordinary reader. Dr. Doidge has also proven adept at identifying pioneers who have taken this idea that the brain is plastic—that is, malleable and changeable—and used it to launch revolutionary change in many fields.

Six years ago I worked with one such pioneer, Barbara Arrowsmith Young, on her book about applying the principles of neuroplasticity to learning disorders. For that project, I interviewed Dr. Doidge at his home in Toronto. I was reminded of an encounter nine years before that with the neurosurgeon Dr. Oliver Sacks when I was a producer with CBC Radio. Both men struck me by the great care they took with words, the initial caution in those first few minutes of conversation, and the burning passion and curiosity displayed in the hour or so that followed. I vividly remember Dr. Doidge, once all the parameters had been laid down, saying, “All righty. Good. Let’s go.”

Numbers don’t always tell the tale, but the numbers on The Brain That Changes Itself do hint at this book’s extraordinary reach: one million copies have been sold in more than 100 countries and the Dana Foundation—a private philanthropic organization that supports brain research—looked at 30,000 English books on the brain before naming Doidge’s the best general book of its kind.

He is the great international champion of neuroplasticity, and we are only beginning to understand and deploy the idea’s applications in neurology, medicine, education, psychology, speech therapy, music and sports. That day in Toronto, we talked about how neuroplasticity has taken hold in neuroscience, less so in education. “These are just still early days,” he assured me. Dr. Doidge is absolutely right.

No one can predict where neuro-plasticity will take us in decades to come, but the words that come to my mind when I think of that concept are hope and healing in the face of injury, illness or challenges once thought insurmountable. Wherever that journey takes us, we can thank this Canadian psychiatrist and psychoanalyst for helping to get us started.

In a lovely appreciation of Oliver Sacks, written in The Globe and Mail in 2016, Doidge wrote, “We long for thinkers like Dr. Sacks, who remind us that science is about wonder, and who, by so doing, hint that perhaps the idea that we are merely matter in motion is just part of the story, but not the whole story. His emphasis on wonder reminds us that science is about opening, not just closing, questions.”

The same could be said of Norman Doidge and his enduring and endlessly fascinating book on the human brain.

Lawrence Scanlan
Lawrence Scanlan is a writer, editor and journalist. He worked with Barbara Arrowsmith Young on her book, The Woman Who Changed Her Brain (Free Press, 2012).