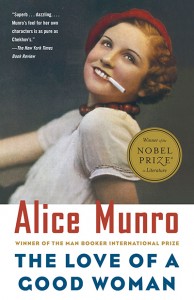 She is our leading storyteller, a three-time Governor General’s award winner, twice winner of the Giller Prize; winner of the O. Henry and PEN/Malamud awards in the United States, and a Man Booker International Prize in the United Kingdom, and, to cap it all off, Canada’s only winner of a Nobel Prize for Literature. Of Alice Munro’s 14 books, the majority appeared since the LRC was founded. Among these, her first Giller winner, The Love of a Good Woman is a standout.

For all her worldwide fame she has remained modest, having turned down an Order of Canada and numerous honourary degrees. When I first visited her in Victoria in the early 1970s, she told me she had a horror of becoming like Norman Mailer, “best known for being famous.” These days she lives without ostentation in Clinton, Ontario, or with a daughter in Victoria. Unwilling to be lionized, she sent another daughter to Stockholm to pick up her Nobel prize.  The reader will recall that another of her books is titled after the typical Canadian reproof: Who Do You Think You Are?

She has shown the world the beauty, power, humour and irony of Canadian English, the medium in which she writes. And make no mistake, it is a distinctive speech pattern. Munro has said that she went to Ireland once for an extended period to write, and at the end of that time she realized that Irish expressions and rhythms had crept into her prose. She had to discard everything she had written there. My own daughter, travelling in Italy, was asked to visit a high school English class to read aloud with a Canadian accent from an Alice Munro story.

Alice Munro was born Alice Laidlaw in Wingham, Ontario (current population 2,900), in 1931. A large proportion of her stories are set in this small town in Huron County, renamed Jubilee or Walley or Hanratty in her work. In an interview for the New York Times she called it “the most interesting place in the world,” containing every recognizable human type. Today a steady stream of visitors comes here looking for traces of her characters.

In The Love of a Good Woman, two stories are also set in Vancouver, and a third on Vancouver Island—places she had lived with her first husband, bookseller Jim Munro. Almost all her stories are set in Canada.

The title story is a slowly unfolding murder mystery as well as the story of an unmarried older woman, working as a practical nurse, who seizes her last chance at happiness. Like all of Munro’s short stories, it packs in as much detail and incident as a novel.

Here and elsewhere, Munro’s subject is the lawlessness of sex. She likes to locate the moment when great daring or madness or desire turns the course of a life in an unexpected direction. Sex unleashes powerful forces that are not entirely controllable. There is always a cost to great passion, often paid by the children, as we see in the stories “Rich as Stink” and “The Children Stay,” as well as in the brilliant “Cortes Island” (another murder tale).

She excels, too, at creating rebellious heroines, young women who try to protect themselves from having their spirit broken by conventional busybodies such as Mrs. Gorrie in “Cortes Island” or controlling husbands such as the West Vancouver Marxist in “Jakarta.”

The human dilemmas she writes about are timeless. While Munro’s stories are mostly set in the ’40s, ’50s and ’60s, they are never nostalgic nor do they seem dated. She has revivified the short story, both here and abroad, and increased respect for Canadian culture, expunging the lingering prejudice that Canadians are prim or boring.

The American writer Cynthia Ozick famously called Munro “our Chekhov” but Canadians object to that casual expropriation. She is ours.

Judy Stoffman
Judy Stoffman writes, edits and collects art in Vancouver. She is associate editor of the Literary Review of Canada..