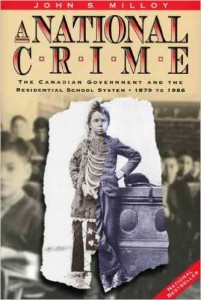 It’s hard to imagine a more important book than A National Crime. When published in 1999, it exploded the widely repeated myth of Canada’s so-called better treatment of indigenous people. Milloy traced the history of a system of cultural erasure that had been founded in the midst of unplanned chaos in the late 19th century and which continued its underfunded, overlooked and unfortunate existence until the end of the 20th century.

There had been many reports of the abuse in the schools before this book, but Milloy’s meticulously researched and artfully written book was well timed. This is the account of a historian who worked with the Royal Commission on Aboriginal Peoples in the 1990s and would go on to work with the Truth and Reconciliation Commission. Milloy titles his book in almost horrified mock homage to a 1922 report called The Story of a National Crime that had laid bare some of the horrors of the residential school system. Decade upon decade of continued indifference and misguided assistance was to follow.

Although A National Crime is about government policy, Milloy continually reminds us of the human effects of these policies. Sympathetic to those it studies, A National Crime is still a book of searing analysis, explaining how and why such a horrible system was created and continued to exist for so long.

Christopher Dummitt is an Associate Professor and Chair of the Department of Canadian Studies at Trent University. His current book project is The People Unfooled: Mackenzie King’s Secret Life and the Making of an Irreverent Democracy (in press).