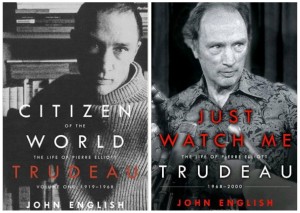 Through mythic heroes, we tell our cultural story, and that is why I believe John English’s two-volume biography of Pierre Trudeau deserves to be included in the LRC’s 25-year list of titles.

He was our most mythological prime minister. If national culture exists, it is the narration of mythology: the delivery of idea and image at the same time. The simultaneous cultural message delivered both to the mind and to what Carl Jung called the “mind below the mind” (and what others might call the soul). It is mythology that reveals the deep patterns of meaning and coherence in a culture.

There have been more books written about Trudeau than any other Canadian public figure but none as monumental as English’s. He was given access by the family to Trudeau’s mammoth trove of personal papers. He is the superb portraitist who has presented us with the full canvas of the Canadian we dreamed ourselves to be.

Through English’s words, Trudeau emerges as the hero who is like us, but better than us. He was rich, smart, brave, and dressed in gorgeous clothes (the capes, the leather, the fedoras). He was beautiful and captured the beautiful maiden, a Hegelian spirit of the age, who had Vision and Ideals, who answered the heroic summons to adventure. He was even fond of yoga and meditation, and could converse on subjects as diverse as Mayan architecture to deep-sea diving. He forced even his foes to identify with him—because when you tangle with the hero, when you denounce the hero, you get into the ring with him.

English gives us Trudeau as the enhancement of the earthbound Canadian. With him, we did not feel provincial.

Michael Valpy is a journalist and author. Through a long career at the Globe and Mail, he served as correspondent, national political columnist, member of the editorial board, and deputy managing editor before leaving to teach in 2010. He is a senior fellow at Massey College, University of Toronto.