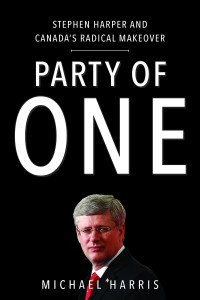 The lessons in Party of One: Stephen Harper and Canada’s Radical Makeover by Michael Harris have not lost relevance or importance with the recent change of government in Ottawa.  Harris’ lively yet carefully researched account is a model of investigative journalism that documents how easily a party and a nation can fall into the hands of a small clique of extremists led by an unscrupulous, despotic demagogue. Canada’s archaic and weakly codified version of Westminster democracy made it especially vulnerable to the slow-motion coup d’etat carried out by the self-styled “Harper Government.” For now, many details of this process are still fresh in the public mind.  These include electoral fraud and voter suppression, contempt for parliamentary practice and tradition, use of omnibus bills to cripple longstanding environmental law, stoking of fear and hatred against ethnic minorities, silencing of scientists and civil servants, destruction of public archives and data, demonizing of lawful dissent, attacks on the judiciary, bending of public institutions to partisan ends, secrecy and corruption. But political memory is short and such things could happen again, perhaps irreversibly.

This book reminds us that our democracy must be reformed and strengthened without delay if Canada is to regain its standing as a mature country where elections are free and fair, where high ethical and environmental standards are upheld, where human rights are respected at home and abroad.

Ronald Wright is a historian, novelist, and essayist. He is the author of ten books of fiction and nonfiction, published in 16 languages and more than 40 countries. His latest book is The Gold Eaters (2015).