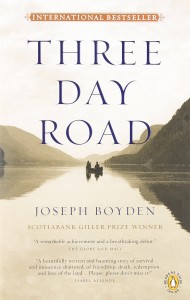 Joseph Boyden’s first novel, although inexplicably overlooked by the Giller Prize jury for that year’s books, hit Canadian readers with stunning impact, both literarily and historically. It joined an impressive shelf of Canadian fiction centred on the First World War, but it changed the focus on that disastrous conflict radically by telling the story from the point of view of Xavier Bird, a quiet indigenous teenager from up near Moose Factory, Ontario, who enlists along with his hyperactive childhood pal Elijah Whiskeyjack. Together, based on their hunting skills learned in the Canadian north, they form a duo of deadly snipers who haunt the trenches of northern France, taking down hundreds of ‘Fritzes’ over their five years of service.

Elijah does not survive the war. Xavier does, although he loses a leg, his hearing and an immense chunk of his soul. On his return to Canada, he is met by his aunt Niska, who has spent her life in the wild, and she paddles her wounded nephew back north into the bush, telling him stories of their communal past and ministering to his morphine addiction with ancient natural remedies.

Many non-fiction works over the past quarter-century have begun to seriously explore the vast and troubled gap between aboriginals and settlers in Canada. But it takes the daring artistry of a writer like Boyden to fully humanize “the Other” and give him his rightful place in the country’s history.

Bronwyn Drainie is a former columnist for The Globe and Mail, and host of CBC Radio’s Sunday Morning program. From 2003-2015, she served as editor of the Literary Review of Canada.