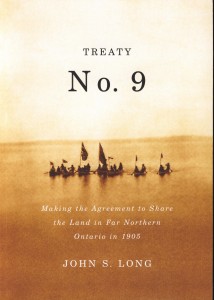 The story at the centre of Canadian history seems to be the vast, 500-year long collision between the indigenous peoples of North America and we newcomers who came to found Canada.  It is hard to point to one book that really encompasses that whole story. But increasingly the insistence by First Nations that “we are all treaty people” seems to be the key both for understanding the past and for shaping the future of the Canadian-First Nations relationship. The book that really brought that home to me was a thick scholarly work published by McGill-Queen’s University Press in 2010: Treaty 9: Making The Agreement to Share the Land in Far Northern Ontario in 1905 by John S. Long of Nipissing University in North Bay.

Treaty 9 observes the treaty commissioners and the Cree and Ojibwa headmen who met along the rivers of far northern Ontario in 1905 to negotiate one of the last numbered treaties in the Canadian provinces. Gradually John Long establishes incontrovertibly what the First Nations have always said: their forefathers negotiated a sharing of land, not the surrender that was written up in the treaty document that would be filed in Ottawa as Canada’s official version. Since the acceptance of shared title to land and resources is likely to be the way forward all across Canada, Treaty 9 remains profoundly useful for its lucid explanation of the historical grounding of that reality.

Christopher Moore is a writer, blogger, and commentator. received his second Governor General’s Literary Award for From Then to Now: A Short History of the World (2011).