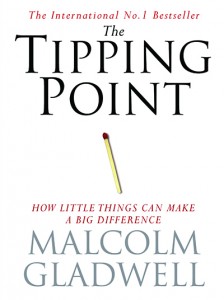 How does a small trend become a ubiquitous “thing”? This is the central question explored in Malcolm Gladwell’s The Tipping Point. The Canadian-born writer for The New Yorker, who has studied society’s propensity for trends for many years, first came up with the concept when he discovered a syphilis contagion in urban Baltimore in the early 1990s. Finding the metaphor an apt one, Gladwell contends that social change is like a disease epidemic; that the tipping point is that moment when a singular or isolated idea overruns its small audience and becomes mainstream. Applying pseudo-scientific analysis and terminology, Gladwell expostulates on the tipping point phenomenon, uncovering how new ideas are disseminated and products become popular based on the opinion of an isolated few.

Gladwell argues that quasi scientific rules or principles govern trends, beginning with the “Law of the Few,” an idea or behaviour that diffuses solely within quirky groups of individuals (think ugly hipster glasses and beard oil). He identifies the “Connectors,” individuals linked up to a diverse population whose opinions others rely on (think Oprah). Then come the “Mavens,” those with specialized knowledge whom others turn to for advice (think Bill Gates or your nerdy IT expert friend). Finally, there are the “Salesmen,” those whose keenness for products propels their consumption (think girls on Instagram eating Froyo).

One of the buzzwords Gladwell’s book introduced into the vernacular is “Stickiness.” That is, why is it that some trends are absorbed by our culture and others are not? Here we confront the actual content of the trend: while cool connectors and savvy sales people can promote a trend, the message has to be worth sending, especially now in our age of information accessibility and overload. Stickiness is crucial if the message is to survive.

Finally, Gladwell discusses the “Power of Context,” which refers to the environment within which the message diffuses; social epidemics will undoubtedly be unsuccessful, Gladwell argues, if the geographical location where they are introduced is inappropriate or if the world is unprepared (think the Occupy Movement). Gladwell also points out that only a small group—maximum size of 150—can facilitate the exchange of messages, due to our biological limitations. Basically, this means that a group of 150 people can easily diffuse a message through the whole group while larger groups cause fractures and subgroups that will not successfully serve to deliver the message.

Gladwell rounds out all his theories through anecdotal evidence, explaining, for example, why crime dropped dramatically in New York City through the creation of the small and manageable goal of cleaning up crime on the subway system. He examines how focusing on the subway clean-up of the most dangerous American city, wracked by drugs, prostitution and gang violence, helped transform it into a model metropolis.

Anyone mistaking this book for hard science or original sociological insight will be disappointed. The Tipping Point is one writer’s take on systems theory, mixed in with good old-fashioned common sense; that is, for this reader, it was a slow read about obvious ideas peppered with interesting and amusing anecdotes, collected over Gladwell’s years as a journalist. But, a valuable read for marketers and IT educators and those curious about trendsetting, it launched a slew of imitations and a publishing sub-genre of its own.

Ibi Kaslik
Ibi Kaslik is a writer and arts educator. She teaches creative writing at the University of Toronto. Her most recent novel is The Angel Riots (Penguin Canada, 2008).