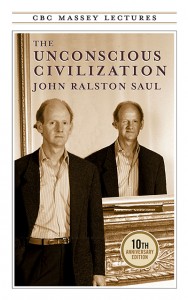 One of my favourite sayings by the Canadian brainiac Northrop Frye is an acerbic comment he made about his (and my) hometown: “Toronto is a good place to mind your own business in.” I thought that was a wryly funny zinger for many years, until I read John Ralston Saul’s The Unconscious Civilization, which contains this quotation from Socrates’ final speech: “I cannot ‘mind my own business’ . . . examining both myself and others is really the very best thing a man can do and . . . life without this sort of examination is not worth living.” Suddenly Frye’s aphorism didn’t seem so amusing any more.

Saul is Canada’s own wannabe Socrates, a gadfly constantly stinging our comfortable image of ourselves as one of the Goody Two-Shoes of the planet. In recent years he has concentrated on relations with our aboriginal predecessors, neighbours and partners, but in the 1990s he tackled more universal subjects in Voltaire’s Bastards (1992), The Doubter’s Companion (1994) and the book chosen for this LRC 25 list, The Unconscious Civilization (1995) which, in the terse required structure of the annual Massey Lectures, managed better than the first two volumes to convey Saul’s thinking about modern society and how it has gone off the rails. It won the 1996 Governor General’s Award for Non-Fiction.

Essentially Saul says we are living in an age dominated by corporatism, not democracy. Corporatism—invented by Napolean and given an ominous 20th century gloss by Mussolini—posits a strong and direct emotive relationship between the leader and his people, while interest groups, economists and managers are left alone to run things without all the messy trappings of representative democracy. Letting the experts run things turns us from citizens into subjects, and leads us to a comfortable state of unconsciousness, in which “the overall effects on the individual are passivity and conformism in those areas which matter and non-conformism in those which don’t.”  So we let the banks and money managers lead us over the brink in 2008, while we role play, frolic and exhort in the limitless children’s playground of the internet.

The book is rich with history, ideas and politics, stretching from ancient Athens to the late 20th century. Rereading it 20 years after publication, I find Saul’s analysis bang on except for two things. Appropriately for the 1990s, he sees the entire western economy in thrall to the managerial class, who like to avoid risk and therefore keep us spinning our wheels with privatizations, mergers, takeovers and downsizing, rather than real financial growth. But, in the past two decades, the entrepreneurial class has come roaring back, with Gates, Jobs, Zuckerberg and Bezos leading the pack, although Chrystia Freeland’s Plutocrats: The Rise of the New Global Super-Rich and the Fall of Everyone Else (2012) makes it clear that the rewards for this technological explosion are consolidating firmly in the hands of the 0.1 percent with little spillover into the public good. The other lacuna in Saul’s book is climate change, which has slowly made its way to the front pages over the past 20 years, and which is a perfect example of the kind of unconsciousness he is describing.

Solutions? Of course not, how could there be? The best Saul can do is remind us that “the very essence of individualism is the refusal to mind your own business.” In other words: Wake up. Speak up. Get involved. Doubt. Question. Participate. The exhaustion you feel when you read those words is precisely the effect the corporatists want you to feel. As Margaret Thatcher so famously said (and it’s surprising that Saul doesn’t quote her): “There is no such thing as society. There are individual men and women and there are families.”

Bronwyn Drainie
Bronwyn Drainie is a former columnist for The Globe and Mail and former host of CBC Radio’s Sunday Morning program. From 2003 to 2015, she served as editor of the Literary Review of Canada.