The Book of Grief and Hamburgers

A hamburger is not necessarily the thing one turns to for spiritual sustenance, yet this is where Stuart Ross — an atheist and a vegetarian — has found himself. It is an unusual predilection, one that he has had since he was a teenager. Whenever his writing becomes too heavy, its subject matter too emotional, he will throw in a burger to lighten the mood. It is his own form of literary comfort food. While some look to angels or love or the magic of the moon, Ross prefers his lyrical devices served with ketchup and a slice of pickle.

To get to the meat of this memoir: The poet from Cobourg, Ontario, has reached an age when his life has become defined by those who are missing from it. He has lost his mother, his brother Owen, his father, and most recently, just a raw four months before he sat down at his desk at the end of that long first pandemic year, his oldest sibling, Barry. Among fellow authors, he has lost friends and mentors, those who have helped guide his soul and his thinking. Even his sweet dog Lily is nothing but a memory.

Ross knows that as a writer, he must write (“or else what good am I?”). But before he started work on The Book of Grief and Hamburgers, he never felt so compelled to pour his deeply personal thoughts onto paper. He sees this text as a “path to emotional liberation.” He also feels that he might be fooling himself. But it is time to come to terms, buns, patties, and all.

They say the first stage of grief is denial. When Ross’s mother passed away, in 1995, he was thirty-five and mortality was the furthest thing from his mind. No one in the family had wanted to accept the seriousness of her illness. “She wasn’t actually going to die,” her son explains, because this was not what mothers did. She never woke from the coma she was placed in for a surgery — one that revealed, with a harsh bite of irony, that she was cancer-free. Ross was there when she was taken off the respirator. For years afterwards, whenever his mom appeared to him in dreams, she would not know that she was dead. He didn’t have the heart to tell her. “Somebody give me a hamburger.” 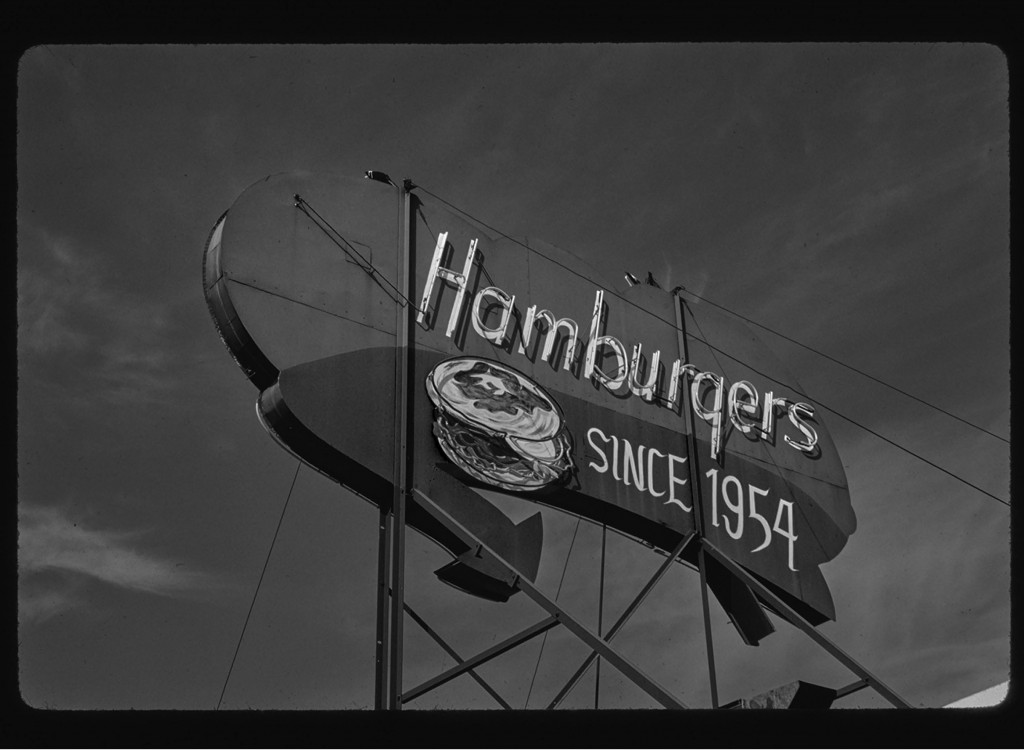 A reminder, a treat, a touch of levity.
Image by John Margolies, 1987; Library of Congress

In some respects, Ross has his mother to thank for the direction his work has taken. When he was a boy of six or seven, she took him to the Art Gallery of Ontario to see Floor Burger, a giant sculpture by Claes Oldenburg made from painted fabric. It was taller than he was. That day, the young poet-in-waiting had a profound realization: “A hamburger can be art.” He describes his mom, who was something of an artist herself, as one of the greatest influences in his life.

If he were “the kind of writer who worked hard,” Ross would track down every mention of a burger in all twenty of his books — the fiction, poetry, and essays — to fork apart all the layers of meaning and tell us exactly how his tastes have evolved. But he’s not going to do that. Instead, as he seems to do often, he looks away: to the American poet Tom Clark’s mention of a “vomburger” or to a verse by his friend Dag T. Straumsvåg that manages to pack in both a hamburger and the Holocaust. Of the small sprinkling of Ross’s own compositions, “Because One Thing Bumped into Another,” from 2005, is the most meaty. The poem is narrated by an actual hamburger (“What was I thinking?” Ross comments) that is trying to make its way in the world until “a dark-suited man with a red necktie” comes along and crushes its dreams. These lines turn out to be about 9/11. “My poems don’t have metaphors,” the author claims. “At least, not consciously.” And he’s right: the burger is flesh and blood, but it is also a window.

Like any poet worth his salt, Ross keeps his language constantly in motion, with his quick dips into streams of consciousness, quotes, and reminiscences about those literary comrades he so loved and admired. “Pull up a chair,” Ross says — perhaps the swivel seat that used to belong to the artist Barbara Caruso, which is now in his care. “In stuff there is grief,” he writes, while acknowledging that someone else may have already penned that phrase. As a memento of Caruso’s husband, Nelson Ball, who “was tall and thin, like so many of his poems,” Ross took a long-armed stapler. Sometimes comfort comes not in the form of a quarter-pounder but in office equipment.

When Ross worked on a volume of David McFadden’s selected poetry, his friend had two requests: for the order of the verses to not be chronological and for some of the mentions of “love” to be replaced with “thing.” The book was titled Why Are You So Sad? Here was a poet who had inserted love into his work when he was in his twenties and taken it out in his sixties. McFadden “was wily that way.” It was “Dave’s last joke” for his ashes to be placed in a Dilbert cookie jar, which his wife topped with one of his caps. It sat at the front of the church while Ross delivered part of the eulogy. The thought of this scene would have made his friend smile.

“I still can’t figure out exactly what grieving is,” Ross writes. “Maybe because it’s a thing that doesn’t seem to ever end.” Sometimes his sorrow takes the form of “a kind of visceral desperation.” At other times it is sandwiched between panic and fear. Occasionally he seeks to relieve the pain with some light patty play: “Inside of a hamburger, it’s too dark to read.” Ross is a wily one too. Mostly he returns to missed moments of interaction: the normalcy of hearing a person’s voice; the terror of the prospect of forgetting it. “If only I could speak with my mom one more time,” he writes. “Please. Can I talk with my dad one more time?” If only he could chat with his brothers again; perhaps they would understand each other better. He would love to speak with McFadden or Ball. He’d like to thank the critic Robin Wood for changing the way he watched films and read books, and for expanding his curry repertoire with the dish rogan josh. How about the Acadian songwriter John Lavery? What he wouldn’t give to hear that “deep rumble” of a voice again. Can he walk his old dog Lily in the park and feel her tongue on his nose? “Please,” he says. “Just my mother. Just my mother and I won’t ask for anything else.” (Another stage of grief is bargaining.)

“It is a tiny little remembrance, an association that might not even be entirely true.”

The process of mourning, Ross points out, is more complicated than crying. He is perfectly good at the latter and does so almost every day: “I am a man of sixty-one and tears often trickle down my cheeks,” he writes. “I sob and curse.” Back in 1985, he drew a sketch of a man standing on top of a skyscraper howling into the night. It is entitled Grief. Even though, at twenty-six, the young artist had not yet experienced much loss, the spirit of the baying man reflects an enduring truth. It is the futility of attempting to scream someone back to life. “It is like trying to make everyone hear me and understand me.” The picture contains another hamburger of sorts: a pretend “ad” in the corner that reads, “Purchase Glit diamonds.” The image is funny and sad. It doesn’t quite make sense. That seems about right.

Ross’s closest friend, Michael Dennis, is dying. Is death worse in the anticipation or in the event? Dennis once sent him a book with a personalized poem, “The Vanier Grill,” inscribed on the padded envelope. The verses end: “we finish our burgers / head home / talking poetry.” After he received the news of his friend’s diagnosis, Ross put together his own tribute: “Michael’s Office.” There is not a hamburger in sight. It is poetry books that are felt “on your clothes, your skin, / on your tongue.” And indeed, around the time these lines appear, as The Book of Grief and Hamburgers draws to a close, the references and the bits of wordplay have all but petered out. This could be progress.

Hope, anger, depression, all the different emotions begin to mash together. Ross has a terrible feeling that he yelled at his brother Owen the last time they spoke. And by “feeling,” he means that it happened, but that he doesn’t want to admit it. The regrets pile up like empty plates. How he wishes he hadn’t had those stupid fights. He and Barry didn’t talk for a year after they had an argument over politics. It was not to last; they spoke again (about everything but). How could they not? They were the last two standing.

Ross talked to Barry twice on the day he died — it was just a coincidence, possibly even a happy one. Even if he feels he has not been able to grieve his sibling properly — whatever “properly” means — he thinks of Barry now every time he fills the ice cube tray. Perhaps once during their weekly phone calls, Ross had poured himself a glass of water and dropped in a few cubes. It is a tiny little remembrance, an association that might not even be entirely true. But that is beside the point. Because Ross could not hold his brother’s hand the moment his heart gave out, he will hold on to the ice cube tray. Is this what acceptance looks like?

Here is the secret sauce: that the world ends “not with a bang, but a hamburger.” And maybe in this version, life’s bleaker moments would be easier to swallow. Ross is a generous writer; he wants this ease for others, even if his own nature has a tendency toward melancholy. He would rather avoid the whimpers: If you want to cry, then cry. If you want to rage, climb to the top of the highest building and howl at the moon. When it comes to his own pain, he calls his deflections cowardice. But a more forgiving term would be “human.” A burger might be a means of avoidance, but it is also a reminder, a treat, a touch of levity in what can be a cruel and trying existence. Grab a chair. Order up.

This insightful, well-written, thoughtful piece, “Mixed Grill,” by Rose Hendrie, made me weepy and grateful.