Vimy: The Battle and the Legend

The year 2017 is the 150th anniversary of Canada’s Confederation. It is also the 100th anniversary of the Battle of Vimy Ridge during the First World War. Celebrations and commemorations of both are rife this year, and it is difficult to say which is more important in the popular imagination. The two events are in curious competition as founding myths, and also often conflated in a narrative that presents the country’s political founding in 1867, but situates its founding in a real emotional sense as happening at Vimy Ridge.

Why have we decided this? The oddity of a battle on another continent, one that took place 50 years after Confederation, being the actual birth of the nation is accepted among Canadians with strangely little question. It is difficult to explain to an outsider. The battle was not in defence of the country against a foreign invader; nor was it won in a fight for freedom against an imperial oppressor. Canadians fought in Europe, as a colony of Britain, in vocal support of the values of the British Empire. Why, then, do we accord so much importance to this event?

The battle of Vimy Ridge began on April 9, 1917, and ended three days later. The ridge was a key piece of high ground that had fallen under German control early in the war. Several costly efforts to retake it had been unsuccessful. Doing so this time was crucial to the success of the British Battle of Arras. The battle was hard-fought and bloody and the Canadian victory is generally credited to technological innovation, especially the creeping artillery barrage, and to meticulous planning and preparation. The capture of the ridge was psychologically important to the Allies, a needed victory after a string of stalemates and losses. It was psychologically important to the Canadians too—the battle was the first time that all four of our divisions had fought together. That doing so led to victory seemed evidence of this nation’s especial military valour. 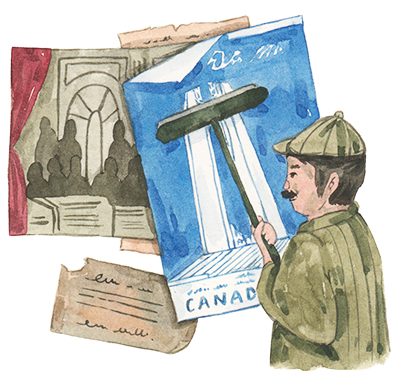 This was heartening, both to the soldiers and on the home front, but it was, at first, not any more than that. Vimy was not the first victory that Canadians, hungry for external validation, won overseas. It was not our first or most important victory even in the First World War. The Second Battle of Ypres was seen, during and in the first years after the war, as its most significant Canadian action. And Vimy was not a battle against as clear-cut a villain as the Second World War would later provide. The tangle of alliances and imperial obligations that put Canadians in France in 1917 seems less suited to myth making than the country’s later battles against Nazis. Why then do people make pilgrimages to Vimy?

Tim Cook’s latest book, Vimy: The Battle and the Legend, addresses this conundrum. The first part of the book describes the battle. The second discusses how Vimy has been used over time to serve the needs and ends of generations of Canadians, and how its popularity and meaning have shifted over the years. Cook is a popular and award-winning military historian and his description of the battle is vivid and painstakingly detailed, showcasing both heroism and the inhuman scale of industrialized warfare, and the damage it does to men’s bodies.

The second part of the book, the shaping of the battle into what he calls “the legend,” traces the ebbs and flows of Vimy’s place in popular imagination. The battle has variously had a more or less prominent place in the public consciousness in the century since it was fought. It has also been presented in different and sometimes conflicting ways. Sometimes Vimy was a means to emphasize the British connection; sometimes it showed independence. Sometimes the battle has been shrouded in grief and loss and a poignant search for peace; sometimes it was about victory and showing Canadians’ instinctive abilities as warriors. Although each narrative served explicit political goals, Cook plays down the role of officialdom in shaping the collective memory. His argument hinges on the grassroots nature of myth making.

What he presents as more formative than politics in shaping the Vimy myth is art. This includes novels such as The Stone Carvers, and paintings such as Ghosts of Vimy Ridge, which hangs in the Railway Committee Room in the Centre Block on Parliament Hill, but it mainly involves the memorial in France. Cook describes the decades-long creation of the monument and argues that its effectiveness is a large part of why Vimy is treated with reverence. The memorial that the Canadian sculptor Walter Allward created is so unique, evocative and beautiful that Canadians built their memory of Vimy’s importance and exceptionalism on the work. A large part of this book of military history is a paean to the power of art.

This seems all to the good, and indeed deciding that the Battle of Vimy Ridge was the birth of Canada as a nation itself seems, in some ways, harmless enough. It is factually incorrect, but few countries’ founding myths stand up to much scrutiny. It is the imagined community that comes of them that is important, more than the stories ­themselves. The trouble is, Vimy has serious limitations in creating community. The battle is sometimes treated as shorthand for the entire First World War. And that war was as fracturing as it was unifying. The losses at Vimy were part of a trend that led to military conscription in Canada. Conscription was resisted by several groups and led to rioting and death in Quebec. The First World War is remembered very differently among French Canadians. We tend to be a bit careful in our commemoration of Confederation, alert to the absences, aware of the effects of the event on the indigenous people who had no say in our country’s founding and who suffered during its expansion. Commemoration of Vimy generally receives less sensitive treatment. That this was certainly no emotional founding of our nation for French Canadians is not part of the narrative. Cook does include discussion of the conscription riots, a strength of the book. It sits rather awkwardly though, unreconciled with his conclusions about the reverence due the memory of the battle.

Cook takes apart the construction of Vimy, shows us its joints and fissures. He quotes the key people involved saying quite explicitly that Vimy was not the birth of a nation, that it was not even the most strategically important battle in which Canadians were involved during the First World War. And he says this does not matter. For Cook, the construction of the myth of Vimy Ridge out of a hodgepodge of needs and aims is not dishonest; it is valuable. Canadians made of Vimy what they needed, and the making was—is—the key thing. It is an intriguing interpretation, but Cook’s skill at presenting popularly appealing, nationalistic history in a nuanced way is rare, and the dominant narrative remains the battle, not its heroic ­construction.

That narrative, the founding of Canada in the battle at Vimy, bothers me more than it should. The trumpery is part of it—the explanation that Canadians won because of some innate superiority, because we are better than the French and British, who lost battles for the ridge earlier in the war, or than those who won the ridge, as the Moroccans did, but were unable to hold it. Tens of thousands of our allies died fighting there, numbers that seem unimaginable today. The Germans lost tens of thousands more. Part of why the memorial took so long to build was the length of time needed for burials and the removal of mines. These men do not get to be part of the memory of the battle, except as foils, evidence of imperial European obduracy. In claiming the battle as solely ours, we have taken from those groups the opportunity to grieve their losses there. The French role at the ceremonies at the Vimy Memorial is to be grateful. Other connections have been similarly obviated. The battle was part of a larger British offensive, and commanded by Lieutenant General Julian Byng, not the Canadian general Arthur Currie, as our dominant nationalist narrative prefers. British soldiers fought with the Canadians at Vimy. They have been erased as well.

The limitations of a battle as a founding event are troubling, too. A battle is closed, violent, finite. A single event. I distrust its tidy, restricted simplicity the same way I distrust the religious language about Vimy—trips to the memorial are described as pilgrimages and the ridge itself, frequently, as “sacred soil.” This banishes complexity and silences analysis. Being told to hold something in reverence is being told not to discuss it, to mention it only in hushed tones and archaic cliché: “The brave Canadians rushed into the storm of steel.” If we present victory in battle as a glorious and necessary solution to the problem of an insufficiently patriotic new country, what traits in citizenship are we lauding?

Canada is unusual in the comparative non­violence of its founding. English Canada had its origins in the rejection of the American Revolution, and the confederation of the British North American colonies, in 1867 and the years following, was a political decision encouraged by the mother country. Great damage was done to the indigenous people, but more often through repression than through battle. This makes for what some might characterize as a boring history: a focus on law and order and an absence of revolution and civil wars. The Battle of Vimy Ridge in this context is appealing simply because it is a battle, and battles are more exciting than debates.

Is it not callow and imitatively childish, though, to put forward a battle as a moment of independence simply because it is exciting, and something that other countries have? A 150-year-old country is mature enough to recognize the value of its idiosyncrasies. And they are valuable. Canada has a tradition of negotiation, of process. This has quite often been incomplete, but it is something that can be built on. Placing the birth of the nation on a ridge in France during the First World War is not. A country that had its origins in pragmatism rather than martial fervour, and whose founding involved a process of negotiation over years offers possibilities for inclusivity. It becomes a country where “enemy” is not a key concept, and one that can accept newcomers of a variety of religious and ethnic backgrounds without fear of damage to a static sense of self. If commemoration is as much about our hopes for the future as it is about our interpretation of the past, this seems more solid ground.