Newspapering: 50 Years of Reporting from Canada and around the World

A Life in Paragraphs: Essays

On the cover of Norman Webster’s Newspapering is a red Parker Jotter, the vintage pen with the famous clicker on top. On the front of Robert Fulford’s A Life in Paragraphs is an illustration, by Seth, of a pipe-smoking man who is banging away with two fingers on what looks like an Olympia typewriter. Both covers are evocative of something old school and iconic, and for good reason. These are books by elder statesmen of journalism — two masters of their craft. Both know how to tell a good story through observation, anecdote, intelligence, and humour. From Fulford’s exploration of the “ambitious and spectacularly extensive sex life” of H. G. Wells to Webster’s description of Pope John Paul II as a mix of Churchill, Kennedy, and Muhammad Ali, these books are lively and informative, with much between the covers.

Newspapering is not a memoir but a collection of Webster’s most interesting and important pieces — an assortment that spans fifty-plus years. Although a number of the selections cast a retrospective eye on Canada and various global events, this is more a combination of life-in-print reminiscences and moment-in-time observations, from when Webster was capturing “the first rough draft of history,” as the Washington Post’s Philip L. Graham used to say.

Through this expansive compilation, Webster gives the reader a look at a great swath of Canadian and international politics as well as a bygone era in print journalism. In one column, from the Montreal Gazette in 2009, he looks back on his decades of reporting and recalls his early days as an intern at that “classy outfit” the Globe and Mail : “Its elevator operators wore uniforms and gloves. The top floor had a squash court installed by a previous publisher. Employees were paid in cash, their weekly wages counted out in bills and change and handed over at a wicket by the company accountant. The paper itself cost a dime, recently raised from a nickel, and fresh papers were rushed to Maple Leaf Gardens for sale between periods.” He continues with this gem, which captures what for many is the romantic image of journalism’s den: “The newsroom was a pigsty. Most reporters sat at desks jammed into rows, with piles of paper teetering on every surface. It looked like a drawing by Dr. Seuss. The air was blue with smoke, of course, and the noise of typewriters, Teletype machines, jangling telephones and shouting deskmen often moved the scene from Seuss to Dante.” 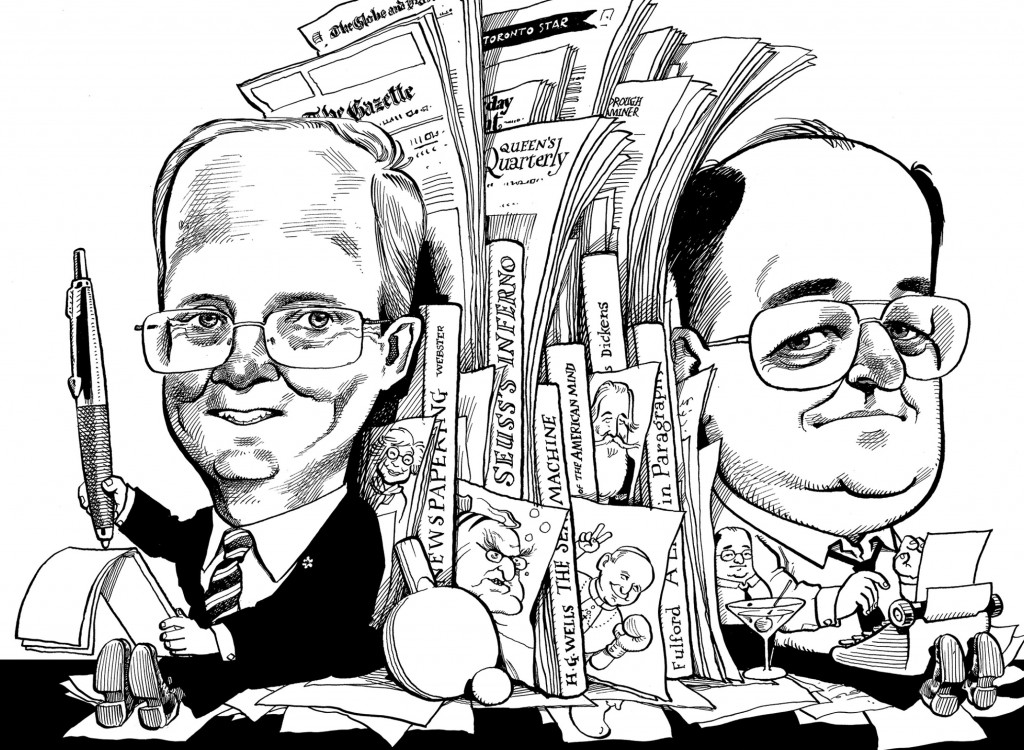 The many column inches between them.
Image by David Parkins

For two years, beginning in 1969, Webster served as the Globe’s first correspondent in Beijing. These were the days of a Communist nation closed to the West, and Webster, in the early going, chafed at the restrictions on foreign journalists. “Were our readers going to criticize us for not reporting more of the ruthless realities of Red China?” he recalls wondering at the time. “Ah, my friend,” responded a colleague from an Eastern bloc nation, “it is better to be criticized than never to see the sun.”

Webster won a National Newspaper Award for his reporting on what was known as “Ping‑Pong diplomacy,” the effort to soften the ground before Richard Nixon’s eventual visit to the country in 1972. “It started, in public at least, with a Chinese invitation to the U.S. table tennis team in April 1971. And so I found myself that spring travelling in the team bus around Beijing with a bunch of slightly goofy Americans,” he writes in a 2006 Gazette column. Webster returns often to the topic of China, weighing in on everything from Mao Zedong, Zhou Enlai, and the drabness he first encountered there to the explosive expansion of the country’s economy and its continuing political controversies.

Webster witnessed a lot in a career that took him from China to Queen’s Park in Toronto during the Bill Davis years, and on to London during the early days of the Thatcher reign. From 1983 to 1989, he served as the Globe and Mail ’s editor-in-chief, a position he also held with the Gazette from 1989 to 1993. Like any great reporter, Webster has keen powers of observation, and his pithy descriptions of well-known figures from the past half century pop from the page. Adrienne Clarkson, for example, is described as “feisty, flinty, glamorous, brainy, ravenously ambitious, and ferociously energetic. . . . The drive, the hunger for recognition, were palpable.” When Brian Mulroney “was in full, unbuttoned flow, there was no stopping him. You said ‘Hello,’ and your part of the conversation was over.” In the early days, the former Ontario NDP leader Stephen Lewis “had all the charm of a barracuda.” Webster had him pegged as early as 1976, writing in the Globe, “Stephen Lewis is not like you and me. He has never said ‘Uhh’ in his life.”

Such amusing and insightful anecdotes make Newspapering a delightful read. Webster’s passions for history, people, and politics — both international and domestic — are infused into each piece. As is fitting for a writer from his era (he turned eighty this year), Webster is never at the centre of things. He stays in the background and lets the story reveal itself. “Show, don’t tell,” which remains one of the golden rules of journalistic excellence, radiates from each paragraph.

Robert Fulford is a very different sort of journalist than Norman Webster, but like Newspapering, Fulford’s A Life in Paragraphs gives the reader a comforting dose of nostalgia. Essays on Charles Dickens, Robertson Davies, Margaret Atwood, Alice Munro, Anton Chekhov, and many others all feature his thoughtful insight and powerful intellect. The one about Davies, in particular, provides a felicitous juxtaposition to Webster’s book, since it focuses on the author of Fifth Business — a reluctant journalist. Davies had “no desire, so far as we know, to enter daily journalism and what E. M. Forster called ‘the world of telegrams and anger.’ ” But he would go on to be a newspaperman in Peterborough, Ontario: “When he was editor and then publisher, from the early 1940s to the early 1960s, the Examiner ’s editorials were quoted more often than those of any other paper in the country.”

“It is a master class in cultural studies, presented in the literary form of a matryoshka doll.”

Born in 1932 into a journalism family, Fulford emerged in 1958 as a prominent writer on the arts with the Toronto Star. From 1968 to 1987, he served as the editor of Saturday Night, before it was acquired by Conrad Black. Though Fulford has had an impressive career and despite this collection’s title, A Life in Paragraphs is drawn almost exclusively from his more recent writings for Queen’s Quarterly. Readers expecting a grand sweep of his opus will be disappointed; however, they will be more than satisfied with his trademark intellectual food for thought.

These selections are as eclectic as they are interesting, ranging in topic from Sigmund Freud and tango to the old Partisan Review and the history of television. Each essay is filled with so many ideas and things to contemplate that it’s best to read them one at a time — two at most — and to reflect for a moment afterwards. As Michael Enright says in a cover blurb, a Fulford essay is “like a crisp dry martini.” One should savour and not overindulge.

To read a Fulford essay is to be exposed to a writer who is infinitely erudite and curious, as well as to delight in learning. It is like a master class in cultural studies, presented in the literary form of a matryoshka doll. Take his exquisite piece about memory, which begins gently enough by referring to the diaries of Charles Ritchie, the diplomat: “He kept a journal, Charles Ritchie said, because he didn’t want life to slip away from him like sand slipping through his fingers.” A number of paragraphs later, we are back hundreds of years, in the medieval and Renaissance periods: “Scholars would give public displays of their learning, some of them boasting of their ability to quote in Latin or Greek all of the important classical authors. Debaters thought nothing of spontaneously inserting into their arguments direct quotations running thousands of words long.”

The essays in this collection are timeless — as the best essays always are — but one of them truly resonates today. In 2012, Fulford wrote on the twenty-fifth anniversary of The Closing of the American Mind, Allan Bloom’s “ambitious and audacious book.” It had made a big splash on university campuses across North America (I remember the conversations it instigated when I was a student at McGill, in the late 1980s and early 1990s) and ended up selling over a million copies. Why? “Partly by accident, Bloom had hit on a subject many Americans, and educated people elsewhere, were worrying about: the purpose, or lack of it, in university education.”

Bloom feared the humanities were losing their importance to “the sciences, the professions, the social sciences, and the business schools,” Fulford writes, “all of them steadily increasing in power and prestige.” And what of the great works of literature and lessons contained within them? Fulford is clearly in Bloom’s camp, as he echoes his defence of the Western canon against those who would rather eschew it: “Humanists, rather than learning from old books, would dedicate themselves to battling against Eurocentrism. Students would be taught to unlearn the value of these books before they learned what the books could teach.”

Nine years after the original publication of this piece, the reflexive dismissal of anything that comes from a traditional or classical tradition would surely irk Fulford even more. “Perhaps that’s what seems most important to me about Bloom’s book today,” he writes. “He didn’t live to see the unfolding of the full craziness of political correctness, but he saw it coming and understood its causes and the harm it could do to us. And his readers were at least prepared to understand it when it arrived and poisoned the air of freedom.”

Not surprisingly, coming from two writers in their twilight years, Newspapering and A Life in Paragraphs both reflect the notion that knowledge, curiosity, writing, contemplation, and an attempt to understand the human condition are valuable components of a full life. All of these lead to a sense of who we are, underscored by a sense of the past. “History thickens daily existence and gives life meaning by linking us with chains of ancestors,” Fulford writes, in an essay that begins with a riff on a Buddy Rich drum solo. “History, if understood even a little, becomes the background against which we enact our lives. Without some personal sense of hist­ory, we work on an empty stage.”

Robert Fulford and Norman Webster, who have given much to this country through their words, had a crowded stage, and their books deserve a wide audience.