The title may be Off the Record, but if you’re looking for major revelations, whether personal or political, you won’t find them here. After fifty years at CBC News and thirty years in the anchor chair, Peter Mansbridge must know where a fair number of the Mother Corp’s bodies are buried and may even have the goods on a few Ottawa politicians. But he is not telling. Instead, readers will find several dozen short chapters of stories and sketches that are rich with self-deprecating wit, pulled together in roughly chronological order. In many ways, this is a reflection on a charmed life.

For years, Peter Mansbridge was one of the most famous people in Canada — recognized as a boyish version of the “girl next door,” a calm and trustworthy nice guy. Each night on national television, he guided us through the first rough drafts of history, from Pierre Trudeau’s repatriation of the Constitution in 1982 to the fall of the Berlin Wall seven years later, from 9/11 to various U.S. invasions and interventions around the world.

While Off the Record offers a string of anecdotes from various front lines and back rooms, it is thin on the kind of personal information usually found and usually wanted in life writing. And that may have to do with a rather new-found sense that Canadians already know him:

It was only after I retired from day-to-day news coverage that I realized people had spent years getting to know me in a very personal way. I’ve had new Canadians, dozens and dozens of them now, come up to me to say they arrived in Canada unable to speak English, but they learned English by listening to me each night. Can you imagine what that feels like to hear someone say that about your work? It’s overwhelming. They’re not crying. I am.

Mansbridge is an immigrant himself, born in London, England, and raised in Ottawa, part of a traditional family that included a much-loved older sister and a brother. His father was a war hero; a wing commander in the Royal Air Force, he flew over fifty missions on two tours of duty and was awarded the Distinguished Flying Cross in 1943. 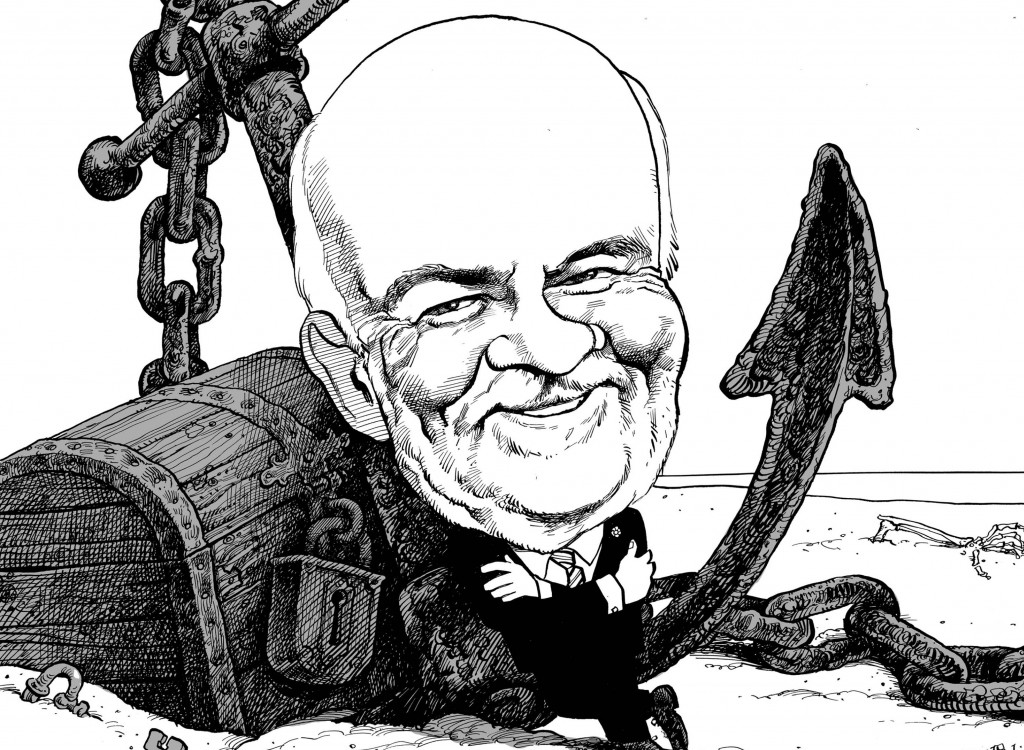 With a treasure trove of stories he’s not sharing.
Image by David Parkins

Peter didn’t finish high school. After “a short, unsuccessful stint in the Canadian navy,” he headed west in 1968 “looking for a new start.” He landed in Churchill, Manitoba, where he found work as a “baggage handler slash ticket agent” for a small airline. Then he was discovered by a local CBC manager who, rather serendipitously, heard Mansbridge the day he was asked to fill in on the PA system. “I clicked down on the microphone button,” Mansbridge writes. “‘Transair Flight 106 for Thompson, The Pas, and Winnipeg is now ready for boarding at Gate One.’ We only had one gate, but it sure sounded like something you’d hear the big airlines say.” The guy from the CBC, Gaston Charpentier, liked the voice and offered the young man a job.

It’s a great story, and the former baggage handler went on to become the poster child for what the CBC used to call the farm system. A young person with no formal journalistic or even post-secondary education could start in the “regions” and work up to the national broadcast service. This meant learning on the job, usually under the watch of some cranky old hand in the newsroom.

It was with the CBC’s Northern Service Radio Station, in Fort Churchill, Manitoba, that Mansbridge started as the late-night announcer-operator. At first he worked the graveyard shift — actually, from about eight-thirty in the evening until sign‑off just after one in the morning. He was alone in the station and responsible for reading scripted weather reports and introducing the music on the feed from Winnipeg. He still remembers his first words on the air: “One moment, please.” The network line had suddenly gone dead, and “no one had briefed me on what to do with a situation like that.” Before he could figure out what he would say next, the feed mercifully came back.

After nearly three years in Churchill, and now with a wife and a child, he was offered a position with CBC Winnipeg in the radio and television newsroom. This was 1971, and the federal election the following year gave him his first chance at reporting as part of a live special. Hosting live TV was to become Mansbridge’s great skill; with his winning combination of warmth and sang‑froid, he became known as the best in the business, even within competitive journalistic circles.

In 1975, it was on to Regina, this time as the Saskatchewan correspondent for The National. Mansbridge had made it to the flagship program, albeit still in the regions and covering such less than glamorous topics as the troubled potash industry. He grew tired of explaining to the editors in Toronto what potash actually was and why it mattered to the province and to the country, but he still smiles whenever he hears the word.

After a year, the self-described “prairie stubble jumper in my twenties” was promoted to the CBC’s Parliamentary Bureau in Ottawa. There he came under the gentle tutelage of the legendary Ottawa bureau chief Elly Alboim. It’s also where he immersed himself in Canadian politics, further developed his skills in live television, and began his ascent to the anchor chair, which he ultimately inherited from Knowlton Nash (who gave it up in an “incredible gesture” that kept Mansbridge from leaving Canada for CBS).

While still working as a reporter, Mansbridge was given the coveted job of hosting CBC News Specials, the programming that pre-empts the regular schedule for in‑depth coverage of major events — whether breaking news like the death of the Princess of Wales or planned events like leadership conventions. Early on, he displayed a talent for ad libbing and for filling time with informative colour commentary and graceful segues. His enthusiasm for Canadian politics was contagious and lent excitement to his national affairs reporting.

One remarkable tale comes from the 1983 Progressive Conservative leadership convention in Ottawa. The night before the vote, Mansbridge managed to land an interview with Brian Mulroney in the bedroom of his Château Laurier suite, while a reception was going on outside. He began by asking Mulroney how things would go the next day. “And then an amazing thing happened: He walked me through, ballot by ballot, the way he saw how the vote would unfold.”

“I’ll be second on the first ballot, second on the second, and probably still second on the third,” Mulroney told Mansbridge. “But while Joe will be first on all those ballots, he won’t grow his vote. I will. I’ll keep getting closer.” Mulroney predicted his win over Joe Clark on the fourth ballot, as well as the crucial role another contender would play. “It will all come down to [John] Crosbie’s vote when he drops out after three ballots. I have more of the Crosbie vote than Joe does, so I will win.”

The next day, Mansbridge anchored a thirteen-hour proceeding: “No commercials meant no pee breaks. Still not sure how I managed that.” Things unfolded just about the way Mulroney had predicted, and the rather shaken new leader honoured his promise from the previous night to visit the CBC booth before talking with anyone else. “We did the interview,” Mansbridge writes, “but the whole time he looked like he was about to pass out.”

In time, Mansbridge became a bona fide Canadian celebrity, who was invited to conferences and events where he could mingle with the rich and powerful. True to form, he tells stories of this side of his life with humorous modesty. Once, for example, he attended a ­dinner in Sitges, Spain, hosted by that country’s king and queen. Also in attendance was Henry Kissinger, who upon returning from the ­buffet line sat down beside Mansbridge. Surprised by the former secretary of state, the journalist said, “Dr. Kissinger, welcome to our table. We appreciate the chance for a chat.” The controversial interloper looked up from his plate with a shocked face. “You’re not the queen of Spain,” he said before abruptly getting up.

“Mansbridge reveals an insecurity about his good luck.”

When Mansbridge spoke to Margaret Thatcher in 1993, as part of her book tour for The Downing Street Years, he faced a famously tough subject, not often willing to play the interview game. The former prime minister answered his opening question, about the Falklands War, with a withering “I really don’t think you could’ve read the full book.” And while he had read the whole thing and told her so, he now wishes he’d countered with “Did you write it?” (British newspapers were saying there were three ghostwriters behind Thatcher’s book, but “I didn’t go there. Should have but didn’t.”)

Not all of these stories are about famous people. Once, Mansbridge was heading to his cottage in the Gatineau Hills when he was pulled over for speeding. He was relieved and hopeful when the officer looked at him and said, “Peter Mansbridge! We were in Sea Scouts in Ottawa in 1962!” Then, after “a couple good minutes of recollecting friends, camping trips, and jamborees,” the cop asked, “So, Peter, what do you do now?” Mansbridge didn’t get out of the ticket.

Often the best memoirs and autobiographies offer readers telling insights the author may not have intended. With Off the Record, Mansbridge reveals an insecurity about his good luck: seemingly not sure he deserves it, not sure that he made the most of it, and always slightly in awe of power, celebrity, and the world in which he found himself. We’re left to wonder, though, how this former fixture of the news, now seventy-three years old, interprets, with the benefit of distance, all the historic events he watched from the anchor’s chair. The military intervention in Afghanistan, for example, looks much different today than it looked twenty years ago, when the conventional wisdom was that it was the right approach to combatting terrorism. Did TV news, including Mansbridge’s own reporting from Kabul and Kandahar, sufficiently challenge the decision makers? On climate change, should journalists have invested more time and depth in explaining the science years ago? For retrospective analysis and answers to these kinds of questions, readers must wait for another book. But they will still enjoy this one in the ­meantime.

Beth Haddon, a former broadcast executive with CBC and TVOntario, is a contributing editor to the magazine.