Molly Peacock’s Flower Diary could be just another book about the long line of female artists, several with double-barrelled last names, whose works went unrecognized by patriarchal critics for so many years. Such overlooked women figure prominently in Carol Bruneau’s Brighten the Corner Where You Are, a fictionalized account of Maud Lewis’s life, and in Katherine Ashenburg’s Sofie & Cecilia, a novel that reveals the unknown talented wives of the celebrated Swedish artists Carl Larsson and Anders Zorn. The Art Canada Institute has added Helen McNicoll, an early Canadian impressionist who was long forgotten, in its Online Art Books series. And the McMichael Canadian Art Collection’s new exhibition Uninvited: Canadian Women Artists in the Modern Moment, curated by Sarah Milroy, showcases the work of women who had to fight for recognition in the interwar years. (The show runs until mid-January 2022.) But Peacock’s biography is not any old book.

Like several recent authors, myself included, she explores how two visual artists attempt to sustain a conjugal partnership while being totally absorbed by their individual careers. In this case, it’s American-born Mary Hiester Reid and George Agnew Reid, a Canadian, who met at the Pennsylvania Academy of the Fine Arts in the mid-1880s.

In a number of ways, Hiester Reid followed the path of many young women who were determined to become professional artists and who flocked to American art schools and especially to Parisian ateliers that catered to them. Most of them struggled to make a living and eventually capitulated to the convention of marriage. After she married George, six years her junior, in 1885, Mary fitted her painting schedule into her many domestic duties, which included entertaining her husband’s male artist friends and being house mother to his summer students, who attended classes at their studio in upstate New York. She accepted without complaint George’s becoming a full member of the Royal Canadian Academy of Arts in 1890, while she had to wait until 1893 to receive the lesser designation of associate member. 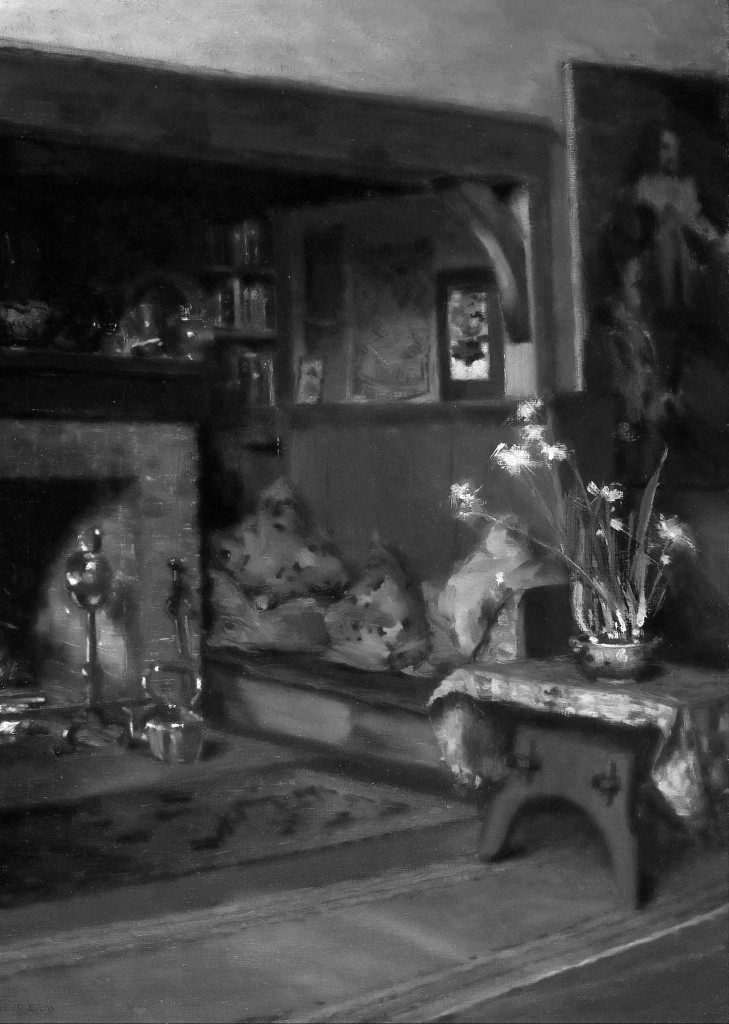 George Reid, although exposed to nineteenth-century artistic trends from Europe, made a success in conservative Canada with his storytelling pictures, such as Mortgaging the Homestead, from 1890, which portrays a melancholy scene of a family signing away their property. That same year, he sold The Story, which shows four young lads gathered in a circle around an older boy in a haystack, to Sir Edmund Osler for $1,000 (the equivalent of $30,000 today). Much later, in 1912, Reid became principal of the Ontario College of Art. “Enviably,” Peacock writes, “it was about the best job an artist of that moment could get.”

Over her lifetime, Mary created more than 300 highly realistic floral still lifes and landscapes, which she painted using a variety of contemporary techniques, including tonalism and, most predominantly, impressionism. In describing Roses in a Vase, an oil painting from 1891, Peacock, who is a poet as well as a biographer, captures the visual impact of Mary’s work:

Three roses loll from a ginger jar as if they are stretching from the rumpled sheets of a bed. Each peachy head, negligee-soft, turns from the other, one as far away as its long stem will take it, one centered, as if it were growing out of the pot, and one hanging off, a heavy bloom on a fragile neck, to the side of the blue-painted ­watery ceramic landscape below.

In the April 2021 issue of this magazine, Charlotte Gray wrote that a compelling biography must answer two crucial questions: “The first is ‘Who is this person?’ The second is ‘Why is she or he important or interesting?’ ” Peacock herself admits that Flower Diary was a chancy project, because so few extant documents, such as diaries and letters, capture Mary’s voice and thoughts. And while the Reids were both talented, neither of them pushed any artistic boundaries.

Perhaps the most interesting thing here is that Peacock is incapable of writing a dull book. She is an idiosyncratic biographer who intersperses her own presence and life experiences among those of her subject. She employed the same approach in an earlier book, The Paper Garden, to tell the story of Mary Delany, an eighteenth-century widow who began creating exquisite paper flower collages as a septuagenarian.

Using a variety of methods to segue to her own life, Peacock compares and contrasts the Reids’ union with her own marriage to another creative individual, the James Joyce scholar Michael Groden. And she explains how, over the eight years that she took to write Flower Diary, she was filled with constant dread as he battled cancer (he died in March 2021). At times, Peacock’s disclosures are painfully intimate, including when she describes their habit early in the pandemic of retiring at five o’clock for what they called the Murmur Massage, when they talked and cuddled while aromas of dinner in the oven wafted into their room: “Our bed became like the front seat of a vintage car: host to a low-voiced exchange on a fantasy drive.” It’s an unforgettable peephole into what a close marriage looks like.

Reading a book by Peacock is like listening in on a fascinating conversation, in which one can learn about philosophical concepts such as ukiyo, the Buddhist notion of the fleeting nature of life, one minute and about the Empathists, who suggested that a spectator and a painting share a unique space through “psychological connection,” or even about thought-provoking acknowledgements of traditional Indigenous territory the next. While never being patronizing, she offers quick lessons in art history and visual techniques, and she pops in numerous fascinating asides. In describing a third-class train trip the Reids took in Spain, for example, Peacock mentions that women’s underwear at the time did not have a closed crotch — the better for “squatting over a hole in the car to urinate.” And she gives a complete and straightforward explanation of nineteenth-century contraception methods.

Peacock is also the type of writer who insists on a physical book being as memorable as its contents. With its heavy stock, beautiful colour reproductions, and elegant floral endpapers, Flower Diary really is in a league of its own.