Surrey is the epitome of the changing suburb in North America. Originally a farming region with a few scattered settlements, this 300-square-kilometre principality south of big-city Vancouver became the archetypal bedroom suburb in the second half of the 20th century. For those decades, it was little more than a vast tract of wide sidewalk-free roads, cul-de-sacs, split-level houses, malls and Caucasian two-parent families fleeing the evils of the big, bad, expensive city.

All of the above are still around, here and there. But so are many other things. Clusters of high-rise condo towers. The region’s biggest concentration of South Asians, complete with their own malls, temples, banquet halls, charities, parades, social-service organizations and business associations. A rapid-transit line has become the development spine of the city. There is crime, a cluster of ­addiction-recovery houses, homelessness, car thefts. Also bike lanes, increasingly gorgeous parks and multicultural music festivals.

In other words, it seems a lot like a big city. It has an arts centre, with a gallery that puts on an eclectic mix of shows, from local quilters to the ultra avant-garde. One exhibition several years ago, by Vancouver artist Sylvia Grace Borda, was dedicated to photographs that depicted one particular aspect of this suburb. Called “Every Bus Stop in Surrey, B.C.,” it displayed a series of pictures of desolate, people-less bus stops in landscapes dominated by bland new houses, cars and overhead wires, with occasional fragments of British Columbia mountain peaks in the distance. Another show, more recently, displayed images of sprawl alongside images of giant suburban houses grown to the size of Bavarian castles. 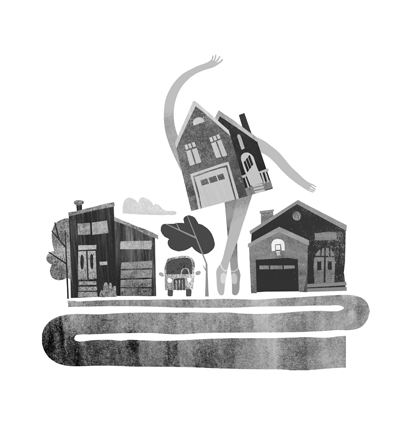 There is considerable irony here. The City of Surrey has done a lot to show that it is not just another suburb. It put money into the Surrey Arts Centre, which includes a theatre as well as the art gallery. The gallery pays to have artists in residence and sophisticated gallery directors and contemporary art shows, all meant to be visible evidence of how this former suburb is developing a more complex identity. And what goes on display? Portraits of monotonous, isolated suburbia.

That same dynamic—the attempt to escape the gravitational pull of the bad old image of the suburb followed by the inevitable fall back into the clutches of that same image—is at the heart of a new academic book by York University professor Alison Bain that looks at arts, cultural workers and cultural planning in the suburbs.

In Creative Margins: Cultural Production in Canadian Suburbs, Bain opens by asserting that she disagrees with the simplistic and city-centric representation of the suburbs that has dominated academic literature for a century or more. “Like their urban counterparts, suburbs are heterogeneous, complex, contradictory, and multi-authored places eminently worthy of continued re-­conceptualization,” writes Bain in her beginning paragraphs, as she layers academic analyses of urban life onto an empirical and qualitative study of arts life in the suburbs. Her study aims to “challenge an ordering of urban space that produces the suburban as ‘sub-creative,’ and a denigrated spatial ‘Other.’” Bain makes that kind of claim several more times in the book, always promising that we will get a look at the new, creative, textured suburbs.

And the suburbs appear to have so much promise. They are a kind of new frontier, making them ideal ground for artists to begin to transform as they did in the inner cities for the last century or so. Many of the issues that attract contemporary artists—poverty, social inequality, the uneasy interface between the natural environment and the human-built one, the evolution of urban landscapes from prosperity to abandonment to reuse—are all out there, waiting to be explored by a creative class in the suburbs.

And speaking of the creative class—that term popularized by the continent’s best-known and frequently critiqued urban studies theorist, Richard Florida—the suburbs deserve study to figure out what their place is going to be in the new creative-class economy. As Florida has argued, the new, mobile class of problem solvers (entrepreneurs, tech wizards, inventors, new-economy creators) are going to gravitate to cities that are, among other cool things, rich in the arts. But he has acknowledged, too, that the creative-class cities generate a Catch-22 for the arts—the more attractive they are to the creatives, the more expensive the real estate gets and, therefore, the less able those cities are to make room for artists to live and work.

It seems beyond self-evident that artists, priced out of their former inner-city neighbourhoods, the ones they turned into desirable neighbourhoods for new, wealthier residents, should migrate to the cheaper suburbs and, as they have done elsewhere, transform formerly hostile territory into culturally rich hubs.

But all of that promise about the arts possibilities of the suburbs does not seem to come to much, in the end. Bain, who focused her research on four suburbs—two older, two newer; two in Vancouver, two in Toronto, along with one detour to Calgary—did discover a few shoots of that kind of suburban creativity: a couple of head shops in Mississauga that actually function as the centre of the independent music scene in their neighbourhoods; a small ballet troupe that works out of an industrial building in North Vancouver; a group of young guys who own a house in Calgary that they use as a vehicle for producing art projects, including digging trenches for a re-enactment of First World War combat, replacing the lawn grass with barley for an installation called “Harvest,” and building a mountainous volcano out of cardboard. (Bain describes their work as having “transformed the suburban home into a dynamic site of cultural production”—a description that at least some unhappy neighbours do not seem to agree with.)

But, almost against her will, Bain’s research into the lives, thoughts and practices of artists embedded in Canadian suburbs seems to make the case that those suburbs are, indeed, mostly stifling, barren, monotonous and hostile to those who work in the arts. Yes, there are a lot of people who describe themselves in the census as cultural workers and who live in the suburbs. Of the 140,000 people across Canada who told the 2006 census takers that they spent more time on their art than any other occupation, about 15,500 live in Toronto suburbs (out of close to 50,000 in the metropolis altogether). For Vancouver, it was about 11,000 people in the region’s suburbs, out of a total of almost 23,000 in all of the Lower Mainland. (The City of Vancouver is a much smaller jurisdiction than the City of Toronto, accounting for only a quarter of the region’s population altogether, which explains the difference in proportions of “city” artists.)

But, according to Bain’s interviews with a select group of them—a range that stretched from orchestra musicians to sculptors to gallery directors to actors—they use and think about the suburbs in a way that is not so different from a lot of other suburbanites. Their likes and dislikes about the places where they live, but do not always work, match the traditional suburban image. They moved there because housing was affordable, because it was a good place to raise kids, because it was an easy commute to the city, because it was close to nature, which inspires their art or helps them escape from its pressures. “We wanted to raise children and to be central but have that feeling of a little bit of far away. It seemed that it fit perfectly with our lifestyle,” said one actor in North Vancouver, echoing every middle class person everywhere. One of Bain’s interview subjects even complains about seeing panhandlers move into the neighbourhood.

That is not the end of the sad, untransformative story of the arts in the suburbs. The arts workers who are there bemoan the fact that they are less visible to the downtown arts community, that they still have to travel to the city to get noticed. The directors of suburban galleries ruefully acknowledge that most of their staff still live in the city and see it as the centre of the arts galaxy, that it is hard to get people from the city to come out to their shows, and that even locals do not see their own suburbs as places to explore for arts events. Young men who turn their suburban houses into art projects end up in fights with city bureaucrats over whether they can legally plant barley in their front yards. And, in what is surely the cruellest irony, directors of suburban arts galleries often do not want to show the work of local artists—it is considered second tier, amateur.

At the higher plane of municipal cultural planning, something Bain devotes a whole chapter to, everyone struggles to get attention and funding from their suburban city councils. Bain points out that the suburban politicians who decide these things “too readily gravitate towards celebrating culture in its consumptive and spectacular form” in their efforts to be just like the big city. (Reflecting on Surrey’s tendency to pour its money into the arts centre and big music festivals, and North and West Vancouver’s enormous efforts to build new museums, I can see her point.) Bain does not spell it out explicitly, but clearly the issue is not so much that money goes to big-ticket arts events. It is that the little bits of suburban arts infrastructure need so much more help and do not get it. In the city, arts people cluster naturally in a few known areas, running into each other in cafés and bars, commenting on each other’s work, trading information about shopfronts and industrial buildings that might be available for use. In the suburbs, people are dispersed across big landscapes. And there are not that many usable spaces around. The kinds of suburban arts hubs that Bain documents methodically in her book are community halls or church basements or mini-mall storefronts, some of which end up being used for everything else also going on in the neighbourhood, from weddings to martial arts lessons.

Bain’s final recommendations are that suburban city administrations recognize the dispersed nature of the arts and turn away from the Richard Florida idea that cities only attract the creative class if they can show they have a visible cluster of arts producers. Suburbs can tap into creative-city economics, she argues, but “municipal decision makers must acknowledge that significant numbers of cultural workers live and work in the suburbs [and] must recognize that suburban cultural work has a different geography from its urban counterpart.” (She also recommends that suburban cities insist that their cultural managers live in the suburbs where they work—not a bad idea.)

One thing Bain herself could do to strengthen this argument is to explicitly identify the differences among the cultural workers who live in the suburbs. Her analysis lumps all “cultural workers” together, talking about them as though they are an economically and temperamentally unified group. But some are clearly people whose livelihoods are inextricably tied to large-scale, sometimes commercial productions: unionized members of city orchestras, actors whose work comes from Hollywood North–style TV shows and movies, commercial artists. Those people are not going to remake the suburbs—they moved there to take advantage of the traditional benefits of suburban life. They are in a different galaxy from the lower-income, more experimental artists who are the most likely to try to work with the fabric of suburban life to create a whole new set of clothes. The questions I am left with at the end are: How many of those kinds of artists are out there? And will they ever be able to do more than bloom briefly in isolated spots across the country?