It was a relief to read in Alan Twigg’s knowing and witty book that I am not alone. At one point in Full-Time: A Soccer Story, Twigg relates how he deals with sleepless nights. He explains that at 4 a.m. he tiptoes downstairs and turns on the TV. He is not looking for news reports or old movies. He uses soccer to soothe his soul. “I don’t care if it’s the Argentinian league, the Mexican league or Bundesliga. I have gained access to 140 channels in order to watch the only one that regularly shows soccer highlights.”

On many nights I’ve been there and done that. I know the program Twigg is watching in the night: it is on the Fox Sports World Channel and it originates in Winnipeg, of all places. The nightly soccer news round-up show airs multiple times during every 24 hours. I’ve often watched it, at odd hours, and know exactly how it transports me. It is strange how an hour of soccer news and highlights from around the world, packaged in some TV studio in Winnipeg, can get so many men through the night.

Twigg’s little vignette of late-night comfort seeking in his Vancouver-area home is rich in meaning. Soccer is the world’s game, not the Canadian game. Until television began to deliver live and tape-delayed games from England, Italy, Germany, Spain and France and from all over South America, soccer in Canada was World Cup celebrations in urban neighbourhoods every four years. Even in the large cities, most Canadians paid no attention until certain areas were strangely empty in the afternoon and then full of street celebrations at night. Soccer was for English ex-pats and Italian or Portuguese guys sitting in smoke-filled bars on weekends, awaiting news of Arsenal, Roma, Juventus or Benfica.

Before there was so much soccer on TV, you could say soccer connected much of the world. It was the Esperanto of sports. Anyone at a loss in Rio, Rome or Moscow had only to mention a team or a player’s name, and a connection was made. Soccer is a poor man’s game. All you need is a ball, and that is why it’s played with such intensity and devotion wherever a patch of level land is found.

Twigg’s personal story — and this is a very personal book — is probably commonplace in Canada. As a child in Vancouver in the 1950s he played soccer on Saturday mornings, with other boys. They knew little about the game except the basic rules and Twigg knew he loved playing. He lived for Saturday mornings, “high on the drug of anticipation.” He was a good player. A German-born local coach suggested that he should go to Europe and try out for the youth teams of some of the big clubs. This, of course, was unthinkable then. Soccer was a boy’s game and everybody stopped playing at about the age of 16, when hockey, baseball and football became the important sports. Besides, no one from Canada had ever gone to Europe and succeeded as a soccer player, had they?

Decades later, a longing for that Saturday morning feeling returned. Twigg began playing in an over-thirties league and then an over-fifties league in Vancouver. He played after he had brain surgery. He rediscovered the pleasure of the game. He also discovered for the first time, thanks to television, the depth and breadth of soccer in the world. He began to appreciate the true meaning of a key phrase used in commercials before and during the World Cup in 2006. The phrase was Joga Bonito and it means “play beautiful.” Twigg became addicted to the search for that — the elegant play, the balletic movement, the skilled player’s breathtaking mastery of the flying ball that ends in a goal. In that too he is typical. It’s what we all want, really, those of us who watch TV at 4 a.m. or travel the world to the big tournaments. We are like the great Uruguayan writer Eduardo Galeano who describes himself, simply, as “a beggar for good soccer.”

Full-Time is part rumination on the murky origins and history of soccer and part tale of Twigg’s over-fifties team travelling to France and Spain to play equivalent teams there. His probing of soccer’s origins is captivating, but not meant to be definitive, and that is as it should be. The book opens with Twigg standing in the ruins of a Mayan ball court in Belize. (He has written a book about Belize as well as several books about Cuba.) There, before Christ was born, he points out, teams of players moved a ball back and forth. Later he delves into the roots of the game in ancient Britain where, perhaps, a skull was kicked around. And then there are the Greeks, who took time off from fashioning democracy to kick around an inflated pig bladder, or the Chinese, who, around 500 BC, enjoyed watching players try to kick a ball between two upright sticks. Throughout these ruminations Twigg quotes from Desmond Morris and in particular Morris’s idea of modern man endlessly repeating the ancient rituals of the hunter-gatherer.

Indeed one of the pleasures of Full-Time is Twigg’s erudition on the matter of soccer as a social force and political weapon. He has read Galeano, and English writer Tim Parks, who lives in Italy, and Franklin Foer’s How Soccer Explains the World: An Unlikely Theory of Globalization, and a great many more obscure writings on soccer. He has a good eye for little gems of revealing wisdom to be found in the stories and reminiscences of retired players and managers.

There are times when I think Twigg is terribly wrong. He was horrified by Zinedine Zidane’s head butt of the mouthy Italian defender Marco Materazzi in the World Cup final in 2006. He describes it as “disastrous” and, later, “pure ugliness.” Oh it was ugly, certainly, but for me and some others, Zidane’s head butt was an avant-garde act, a Situationist gesture aimed at deflating the spectacle of the World Cup final and a protest (by a gifted, thoughtful man playing his last game) against the tough-tackling mediocrities who have diminished soccer by refusing to allow its grace and beauty to flourish. It was an ugly act in defence of the beautiful game.

And there is the matter of Twigg’s imaginary conversations with the real and marvellously named Nettie Honeyball, who pioneered women’s soccer in England in the 1890s. These conversations are used to raise questions about soccer and life but they are frustratingly banal, like those periods of uninspired play in any soccer game.

The climactic account of the over-fifty Canadian guys going to play in Spain is very nicely done. They are a motley crew. The top player is a postal worker. Two guys have already recovered from chemotherapy, one for leukemia, the other for hepatitis. Another is a doctor and three are academics. Twigg describes their soccer games as “human comedy” and they are. In fact, this book, Twigg’s account of his soccer life and devotion to soccer as a way of life, has an abundance of small truths that are as captivating and unsentimental as the game he celebrates. This book is as full of pleasures as those 4 a.m. soccer highlight shows on TV and just as soothing.

John Doyle is the television critic for The Globe and Mail and has covered two World Cup tournaments and one European championship for the paper. His book Beautiful Game: Travels in Search of Soccer's Small Wars and Big Peace will be published by Doubleday Canada in 2010. 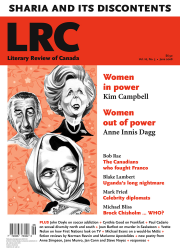