Passchendaele: Canada’s Triumph and Tragedy on the Fields of Flanders

The troops with the worst reputation for acts of violence against prisoners were the Canadians (and later the Australians). With the Canadians motive was said to be revenge for a Canadian found crucified with bayonets through his hands and feet in a German trench; this atrocity was never substantiated, nor did we believe the story freely circulated that the Canadians crucified a German officer in revenge shortly afterwards.

When I first read these lines in Robert Graves’s memoir Good-bye to All That, I felt as though I were peering into another epoch and contemplating another nation. How could my gentle, meek Canada once have been the world leader in killing prisoners of war? For that matter, how could the Canadian Corps, composed of non-professionals drawn from all walks of life, have proved the best unit in the whole Great War? For, as Liddell Hart wrote,

distraction is … an essential component of surprise, and in this case [the Amiens offensive of 1918] it centred round the [misleading] introduction of the Canadians [elsewhere]. Regarding them as storm troops, the enemy tended to greet their appearance as an omen of a coming attack.

Jack Mitchell is a poet and novelist. His latest book is D, or 500 Aphorisms, Maxims, & Reflections (2017).  He is an associate professor of classics at Dalhousie University. 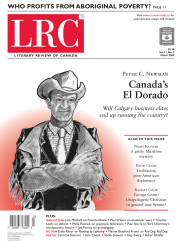