The Year of the Flood

The Year of the Flood takes place in a near-future dystopia that is collapsing under its own weight. In this world, corporate capitalism governs and regulates every human transaction. The commons has been replaced by the mall, the police by a ubiquitous private security force. Everything from love to art has become a commodity, its value determined solely by the price it commands in the marketplace. The resultant toll on the natural world is enormous but largely ignored, except by a cadre of religious environmentalists, “God’s Gardeners,” who live a Thoreau-like existence in makeshift urban communes. The leader of the Gardeners, an ascetic prophet named Adam One, urges his followers to prepare for what he calls the Waterless Flood—a global disaster that will bring down the existing order and restore balance to the wounded natural world.

The Year of the Flood’s protagonists are Toby, a young woman sheltered by the Gardeners when she is assaulted by a corrupt sex-club bouncer, and Ren, a child brought to the Gardener commune by her mother. Their intertwined narratives give us glimpses of the world before, during and after the catastrophe of the title.

Clearly we are in genre territory here, and it is not Margaret Atwood’s first visit: in addition to Oryx and Crake, her classic The Handmaid’s Tale was voted a Nebula Award by the Science Fiction Writers of America. She is not alone. A generation of non-genre writers has recently produced serious works that are not only arguably science fiction, but also demonstrate a close familiarity with speculative fiction and its conventions. (Examples include Michael Chabon’s The Yiddish Policemen’s Union and David Mitchell’s Cloud Atlas.) But while The Year of the Flood falls squarely into the genre category, readers may find it lacks some of that useful familiarity with speculative fiction’s nuts and bolts. A genre is, among other things, a set of literary strategies for addressing particular problems—including, in the case of science fiction, the problem of writing fables, parables or fantasies as if they were a species of literary realism—and The Year of the Flood is occasionally clumsy in the way it erects its futuristic stage sets.

The Year of the Flood often reads like a novel of substance gene-spliced with a back issue of MAD magazine.

Its consumerist dystopia, for instance, is more cartoon than nightmare. The handful of corporate entities and retail chains that populate the novel are given names (Happicuppa, HelthWyzer, AnooYoo, ZizzyFroot, etc.) that might have been cutting-edge satire back when Jack Lemmon movies were lampooning Madison Avenue; today they simply seem quaint. Offending criminals are locked up in a “Painball” facility, where they form teams and play a lethal version of paintball, as if that current fad constitutes a serious symptom of social decline. Genetically altered animals are commonplace, but cell phones equipped with cameras are still a chic novelty item among the younger set. “Asian Fusion” is an ethnic identity, not a cuisine. Nor is the Gardener cult a more convincing creation: its roster of hastily canonized saints includes Saint David Suzuki, Saint Rachel Carson and even Saint Euell Gibbons (whose guide to edible wild plants was a paperback bestseller in the 1960s, in case you’ve forgotten). And so on. If this were better satire the lapses from plausibility might have been forgivable; and if Atwood’s imaginary world had been plausibly assembled it would surely have been more successful as satire. But it fails in both directions, and as a result The Year of the Flood often reads like a novel of substance gene-spliced with a back issue of Mad magazine.

It is, nevertheless, a novel of substance, even if the speculative-fiction set dressing is often threadbare and occasionally amateurish. Both Toby and Ren are fully fleshed characters, bootless in a world that alternately threatens and seduces them but offers little in the way of moral or spiritual comfort. They live in a culture that can synthesize anything—from a new religion to a new species—except genuine human compassion; and their largely unconscious struggle to make meaningful contact with others and with themselves is vividly and heartbreakingly rendered. Atwood’s near-future dystopia may be sketched in crayon, but the concerns she raises are real and pertinent.

The book does not offer any easy answers. Both the corporate state and the utopian religion of God’s Gardeners are impotent in the face of ecological collapse, the first because it has divorced itself from any sense of responsibility and the second because it offers little more than resignation in the face of disaster and disdain for the works of man (along with some ungainly hymns to be sung over the compost bins). One of the book’s genuinely cutting ironies is the nature of the Waterless Flood itself: the disaster that overwhelms human civilization arrives “not as a vast hurricane, not as a barrage of comets, not as a cloud of poisonous gases,” but as a virus, engineered by genetic manipulation and spread by a sex pill. Thus the fulfillment of Gardener prophecy is less an act of God than an act of science masquerading as the revenge of nature.

Even here, some clumsy plotting undermines the story. A plague that eliminates much of the human species coincidentally spares an extraordinary number of the book’s main characters, who run across one another in the wasteland with startling regularity. This is perfectly appropriate to a fable or a fairy tale, but experienced genre readers (and anyone expecting logical consistency) may be frustrated. On the other hand, Atwood’s vision of a depopulated world, another well-worn but always fascinating science fiction backdrop, is one of the best aspects of the book, reminiscent of the mordant end-of-days landscapes the late J.G. Ballard evoked in such stories as The Drowned World and “The Terminal Beach.” And it resonates with the book’s vision of the stubborn imperfectability of the human species: “The human moral keyboard is limited,” Toby reflects at a critical moment, quoting Gardener guru Adam One. “There’s nothing you can play on it that hasn’t been played before. And … I am sorry to say this, but it has its lower notes.” What the human race needs so desperately, then, is not divine redemption or genetic reconstruction but simple forgiveness. “This Forgiveness is the hardest task we shall ever be called upon to perform,” says Adam One; but, the book implies, it is the task most worth pursuing.

Ultimately, then, if The Year of the Flood is not a great work of speculative fiction, it is a good one. It does what speculative fiction ought to do: it challenges us to reimagine the present day from a new angle and reminds us that the path we are treading may lead to some dark and dangerous places. And if one sets aside considerations of genre, The Year of the Flood is above all else a Margaret Atwood novel, richly characterized and emotionally and intellectually rewarding—again, if not her best book, then at least a very good one.

Robert Charles Wilson is a Toronto-area writer whose novels include the Hugo Award winner Spin (Toronto Books, 2005).  His forthcoming novel, Last Year (Tor Books, 2016), is a story of time travel. 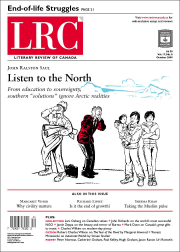