Rush, Rock Music, and the Middle Class: Dreaming in Middletown

I would like to begin by saying that Chris McDonald’s extensive analysis of the 42-year career and significance of the suburban Ontario rock trio Rush would be a better book if only it did not contain quite so much, well, Rush.

I would like to, except that then I risk appearing in a future revised edition as another on McDonald’s lengthy roster of critics who have doled out to Rush a kneejerk, Dangerfieldian lack of respect. Which is hardly fair to the group that gave us the “mean, mean stride” of “Tom Sawyer,” the epic Canada-as-Hades allegory of “By-Tor and the Snow Dog” and invaluable help remembering the Toronto airport code (“YYZ”).

Rush is hard to talk about without sounding like you are making a joke—as amply demonstrated in recent years by the use (however affectionate) of Rush references or cameos as special-comedy-effects in Trailer Park Boys (TV and film), the movie I Love You, Man, the Aqua Teen Hunger Force cartoon and The Colbert Report (where the host read the lyrics of “By-Tor” aloud and pretended to fall asleep as they ran through the lengthy instrumental twists and turns of “Tom Sawyer”).

Perhaps those incidents were too recent for McDonald’s study. Fine. But what about the “Neil Peart sucks” sequence on the 1999 high school TV series Freaks and Geeks? Or watershed indie rock band Pavement’s 1997 “Stereo,” the pinnacle of intramural rock-band humour (they sing: “What about the voice of Geddy Lee? / How did it get so high? / I wonder if he speaks like an ordinary guy? (I know him and he does!) and you’re my fact-checkin’ cuz!”)? Or, above all and for pity’s sake, singer-bassist Geddy Lee’s takeover by force of Take Off to the Great White North, the 1981 novelty single by SCTV hoser duo Bob and Doug McKenzie (“Decent singin’, eh?” “Yeah, he’s good”)?

The Rush joke is about middle class shame, funny because so many of us are in on it.

If I’m aghast that McDonald leaves all these out, it is not because I’m a hater. It is first because they are the band’s most prominent mass-cultural appearances since it stopped getting radio hits in the 1980s, so they merit at least as much dissection as part of Rush’s persona and reception as all the rock magazine reviews McDonald cites. (What to make, for example, of the fact that Lee and guitarist Alex Lifeson consistently go along with the jokes, but not drummer/lyricist Neil Peart?)

But more glaringly, McDonald is overlooking the way that his general thesis dovetails with the Rush-as-punch line effect. His point is that Rush is underrated because the band and its music embody and appeal to a white, middle class, suburban situation and sensibility. And in rock culture in particular and pop culture as a whole, “middling” between the extremes of proletarian rebellion and high-art avant-gardism has been stigmatized as inherently lame.

So the Rush joke is about middle class shame, and it’s funny because so many of us are in on it—begrudging members of North America’s white, middle class majority, with its ambition and status anxiety (which Rush enacts through its conspicuous instrumental virtuosity, managerial professionalism and literary allusions), aggrieved entitlement (Peart’s Ayn Rand–inspired messages about individuality versus the masses), emotional repression (stand still and let the laser show do the interacting with the audience) and insecurities about identity, technology and so on (more Ayn Rand, nostalgic and exoticized references to pre-industrial society, fan in-group bonding).

Whether we like Rush or not—I feel a sort of benevolent indifference, warmed by memories of high school girlfriends’ Rush-fixated younger brothers whose sheltered earnestness I found endearing, but chilled by Peart’s politics—middle class Canadians understand that bundle of awkwardly in-between, psychosocial traits all too well (especially in Ontario, and especially boys). Deny it as we might, we are Rush and Rush is us.

That denial, McDonald points out, correlates to the fact that class in North America is left out of many discussions, including musical ones. (In Britain, for example, the middle class character of prog rock was lost on no one.)

McDonald finally turns his attention to the whole history of “middlebrow” North American culture in the past century.

Yet ironically, given his “middletown” thesis, his book suffers from a problem of camera placement—too few wide shots and too few closeups. It comes alive when quoting the band members, critics, Rush message boards and McDonald’s fan surveys. But it needs some fuller character portraits (“objectively” representative or not), at least of the Rush fan the author knows best—himself. His personal experience pokes into view occasionally, but he is professorially disinclined to draw on that resource. His narrative did not have to be so dry.

The book’s vacuum of general humour is one of many symptoms that it has been insufficiently rewritten from its obvious origins as a dissertation. (McDonald is a teacher of ethnomusicology at Cape Breton University.) Far too many of its sentences are taken up with the business of scholarship—announcing what it is going to argue, documenting its methodology and defining its terms, an armature that keeps the reader at arm’s length from the engaging thesis that it buttresses.

Like the excessive music-jargon salad (“Lifeson’s repeating arpeggiated figure outlining an A-major chord with an added 11th is set against different bass notes from the Mixolydian scale”), the dissertationese lightens as it goes, but for the first couple of chapters the reader has to turn the pages with a forklift.

But there is also so much more potential to this idea of middle class middling. Near the very end, McDonald finally turns his attention to the whole history of middlebrow North American culture in the past century, and how that interacts with rock music, criticism and fandom. It is as if in the book’s dying moments a whole other volume flashes across its mind, in which Rush would be merely a leading example among many, across periods and places.

How do Rush’s middle class positions and strategies compare to what we see on American Idol, for example, or in “buppie” R&B such as Maxwell, or from singer-songwriters such as Feist or Ron Sexsmith, or (perhaps Rush’s nearest heirs) electronica artists such as Windsor’s Richie Hawtin (Plastikman) or indie rock bands like Montreal’s Arcade Fire—none of which really fit within the rebel-prole/high-art dichotomy, either? That question could expand and complicate the somewhat too-straightforward sketch of the middle class dilemma that McDonald outlines.

That’s why I say this Rush book has too much Rush in it. But no offence, dudes: within its limits, McDonald’s is an intelligently balanced, critical appreciation of a cultural phenomenon that has mattered for decades to hundreds of thousands of listeners. It also attempts to probe a sector of social life that is too often unexamined—in a small way helping, à la Socrates, to make it more worth living. And that’s a beauty way to go. 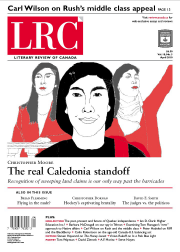