Peter Nowak, a science and technology journalist for the CBC, has written a worthy successor to Swiss historian Sigfried Giedion’s 1948 classic Mechanization Takes Command. Interestingly, Nowak does not even mention Giedion, yet the basic ingredients are here: a magisterial overview of the remorselessness of technology combined with a thoughtful assessment of the economic consequences. Giedion had a comprehensive understanding of the history of mechanization, based on the primary sources of the day. Nowak, in his efforts to penetrate the intersections of elemental human needs and technology, has done a no less comprehensive search, much of it from internet postings and through interviews—and Nowak has done plenty of interviewing. He sets out to look at the technology of hedonism, as opposed to mechanization, as expressed in sex and food, tracing how the sex and food industries have been transformed by ideas originally generated by military research. This, amazingly, is a subject no one has taken on before, perhaps because it seems so diffuse and inaccessible. Yet Nowak masters the material beautifully.

On the face of it, his logic is compelling. “From plastic bags and hairspray to vitamins and Google Earth, military money has funded the development of most of the modern items we use today.” Many of these discoveries were spawned by World War Two: nuclear energy, the space race, genetic research, new chemicals and food additives. More recently, smart bombs and GPS were first showcased in the Gulf War, while major advances in robotic technology are now taking place in Iraq and Afghanistan. “For the most part, this is an American story,” Nowak notes. Not only has the United States been responsible for nearly two thirds of the huge global expansion in military spending between 1999 and 2008, but it is even now, despite the recent rise of China, the source of close to half the world’s research and development expenditures.

After war comes sex, with the pornography industry serving as a key early adopter of technologies devised and refined in military contexts. This includes pornographers’ enthusiastic adoption of 16 mm film cameras, first widely used by Allied forces during World War Two, and the explosion in the global porn trade tied to the internet, whose original development came about through American defence funding. Pornography companies have played a key role in mining such inventions for commercial opportunities not just because of the huge demand for their product. Situated outside the economic mainstream and facing continual antagonism from government regulators, they have learned to be flexible. To a large degree the most technologically savvy pornography providers have been American. “American producers have led every medium shift, from film to videotape to DVD to the internet,” says Nowak, citing evidence that almost nine out of ten adult websites today originate in the United States.

Nowak’s argument is that the onrush of hot sex in our bedrooms and hot fat in our diets is enabled by technology.

In the case of food innovation, Nowak’s story again starts during World War Two. Following wartime advances in preservative techniques, such as spray drying and dehydration, came the post-war application of mass spectro­meters to create new food flavours and a host of spinoff products from Spam and concentrated orange juice to Saran Wrap and Tupperware. Again, he takes the story up to the present day, covering the Green Revolution of the 1950s and ’60s and the technological opportunities that led to the rise of corporate behemoths such as McDonald’s, Kraft and Monsanto.

Nowak’s argument is that the onrush of hot sex in our bedrooms and hot fat in our diets is enabled by technology. One problem with this story is Nowak’s insistence on the importance of World War Two and military technologies in general. The theme obtrudes upon the title. It does seem to be true that a surprising number of popular civilian technologies of fast food preparation and diffusion of images in film or on the internet seem to have a military origin, and that much of this is due to the astronomical amounts that the world’s primary military forces are able to spend on research. So time and again we discover how military planners created the forerunner of the net or downsized the clunky 35 mm movie cameras, so they could be later used for porn shots in bedrooms. And this is mildly arresting. But so what? The point is true but uninteresting unless the rest of the context of these technological breakthroughs is made clear.

For example, according to Nowak, the arrival of Polaroid stills—from a technology developed during the war—constituted a major sexual stimulus. But pre-1940s erotica was brimming with sexy stills. In the 1920s and ’30s, U.S. Customs regularly confiscated this material from passengers coming from Europe. The photos were then donated to the Kinsey Library at Indiana University in Bloomington. I have worked in that collection, and the punch of those 1920s shots of intimate sexual positions among amateurs who happened to have a camera handy is breathtaking: the photos well antedate any modern technology. So let’s not place too much emphasis on World War Two and its military planners.

There is a more basic intellectual flaw in Nowak’s logic. The dynamic is supposedly all techno-push from the supply side—new ways of making Kentucky Fried Chicken or diffusing sex videos on the net push people into their consumption. He does not really consider the desire pull from the demand side. Why do people cry out for these new products and ways of viewing sex? Except for nods in the direction of the cultural drivers such as the Kinsey Report and Hugh Hefner’s Playboy, Nowak does not factor in a restless population increasingly avid for hedonistic experiences that one way or another will find enablement. For him, it is all techno invention rather than longing. That means he misses the deeper, more riveting story of the desire pull on these technologies that produce hot fat—with its distinctive mouth feel—or that produce action porn with its fantastical improvement upon the real thing. And this new consumer demand slides by on these pages, barely visible, yet crying out for explication.

For example, he treats Hugh Hefner and Playboy as though increasing the supply of erotica was the cause of the rising demand for erotica. Yet Playboy had been appearing for a decade by the time the big sexual changes of the 1960s burst into consciousness. Playboy and other erotica were epiphenomena of a deep urge toward the satisfaction of desire that began late in the 19th century and merely accelerated, albeit dramatically, in the 1960s. Nowak sees the 1972 film Deep Throat as a key development. But the rising demand for sexual experience is the interesting phenomenon, not the ability of Hollywood or the 16 mm camera to supply it. A later chapter treats the camcorder as a sex enabler, one that Nowak sees as crucial in the unfolding of American sexuality. These sections have a mechanistic aspect. The war makes the technology available; the technology hits civvie street and gratifies the latent demand.

“While new war tools and weapons inflict tremendous pain, suffering and hardship on one group of people, they also create prosperity, convenience and comfort for others.”

And there is no denying that Nowak’s logic of cause and sexual effect, if accepted as true, has significant repercussions for the near future. Just as it has so many times before, military technology, in one of the unanticipated consequences with which the story is full, will create new ways of passing the leisure hours. These new ways will reach out and grab us as they enlarge the realm of hedonism. The plots lines for this new narrative are being laid down in the war zones of the Middle East. As it has been several times in the past, this region has again been a key site of technological adaptation, but this time by western armies, whose refinements have already begun to seep back into the consumer cultures of their home countries. “The recent conflicts in the Middle East,” says Nowak, “are perhaps the best example to date of this terrible duality of military technology: while new war tools and weapons inflict tremendous pain, suffering and hardship on one group of people, they also create prosperity, convenience and comfort for others.”

The use of the Iraq and Afghanistan wars as laboratories for automated air warfare, in the form of armed aerial drones, is already familiar to most of us, thanks to the flow of daily news reports. What might be less familiar, except for readers who have seen this year’s Oscar winner, The Hurt Locker, is the expanding employment of unmanned ground vehicles, in the form of reconnaissance and ­explosives-disposal robots. “In 2004 American forces had 162 robots in Iraq and Afghanistan; by the end of 2008, they had more than six thousand,” Nowak notes. While civilian companies, especially in Japan, are gaining the bulk of publicity over new types of robots—Honda’s human-like ASIMO and Sony’s canine AIBO being the most famous—Nowak contends these are primarily corporate prestige projects whose high cost makes them of limited practical use to consumers. Instead, it will be spinoffs from American battle robots that will have the greatest practical effect, with the sex industry likely the first to take advantage of the fresh market opportunities. As breakthroughs in artificial intelligence are applied to the creation of gizmos highlighting the sensation of touch, the pornography industry will marshal its considerable entrepreneurial resources to reach a new level of lifelike artifice.

The eroding of the entire print culture that these moving electrons has precipitated is the really interesting phenomenon.

The technological trajectory from the war zones of the Middle East to the inner recesses of western bedrooms may indeed be surprisingly direct, as Nowak contends, but, as before, the ways this new round of technological change will affect our relations to each other is hardly touched upon, besides an offhand suggestion that old-style prostitution might be decimated in the sexbots’ wake. Unfortunately, much of the last quarter of the book deteriorates into a kind of omnium-gatherum of topics that apparently interested Nowak at one point or another without fitting coherently into the argument. In a chapter on the origin of video games, William Shockley, the eugenics thinker often accused of racism, is the main protagonist. He invented semiconductors for Bell Labs. This is intriguing. Yet the imprint of these video games upon young people, the eroding of the entire print culture that these moving electrons has precipitated, is the really interesting phenomenon. We’d like to hear more about it in such a book.

There is almost nothing about Canada in the book. It reads as though written for an American audience, and some aspects of the argument probably would not apply here. Even though today the Canadian sexual scene is second to none in its variety and intensity, 30 years ago that was not true. The spirit of John Knox lingered longer in Ontario than it did in Massachusetts. The timing and possibly even the causality of events would be different in Canada. Nowak, a Canadian who evidently has lived much of his life here, must know that. Yet he has other frozen fish sticks to fry.

Edward Shorter is professor of the history of medicine and professor of psychiatry in the Faculty of Medicine of the University of Toronto. One of his recent books is Before Prozac: The Troubled History of Mood Disorders in Psychiatry (Oxford University Press, 2008). His latest book, Endocrine Psychiatry, co-authored with Max Fink, has just been published by Oxford. 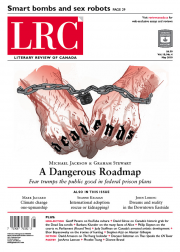