The Four Walls of My Freedom

The Four Walls of My Freedom is a thoughtful and thought-provoking book that describes Donna Thomson’s first 21 years mothering a child with cerebral palsy, and it raises some important questions about the fundamental obligations of the state to provide for its most vulnerable citizens. Thomson’s book alternates between descriptions of the day-to-day reality of life with her son Nicholas, and her reflections on the social, political and philosophical issues associated with this reality. Thomson writes in a clear, engaging style, and sometimes also with narrative flair—for example, when recounting a series of medical crises that assault Nick shortly before his eagerly awaited Sunshine Foundation–sponsored trip to New Jersey to meet a famous wrestler. Will Nick make it to New Jersey? the reader wonders. One finds oneself rooting for this proud, spirited, bright young man and for his family. Of course, the trip is also a metaphor for Nick’s life as a whole. Will Nick, in spite of his physical limitations and the pain he frequently endures, be able to enjoy the pursuits and pleasures that, among other things, are crucial ingredients in any “good life”?

It is no easier for Thomson than for any other parent to accept the full implications of her son’s disability.

And a “good life” is what Donna Thomson wants for her son. In fact, it is her search to define what this is, and how to help Nick to achieve it, that launches her on the personal and intellectual journey that leads her to the work of economist and philosopher Amartya Sen. Thomson meets Sen in England, and, with his encouragement, begins applying his Capability Approach (originally developed in relation to poverty) to the experience of living with a disability. This is the lens through which Thomson subsequently views and analyzes the quality of Nick’s life, as well as the rest of her family’s. This application of the Capability Approach eschews the medical model, and emphasizes instead the personal freedom and choices that all individuals have. According to Sen, a good life is one where there is the “freedom to live the life you value and have reason to value.” This definition provides the overarching framework for Thomson’s book.

The other intellectual guide for Thomson on her journey is the philosopher Eva Feder Kittay, herself the mother of a daughter who is severely disabled, both physically and developmentally. In one extraordinary interchange, two philosophers from Princeton suggest to Feder Kittay that if cognitive ability is the essential feature that morally distinguishes humans from animals, and the intellectual capacities of a pig exceed those of her daughter, then in fact her daughter merits less moral consideration than a pig. (Feder Kittay, of course, refutes this argument.) The great dignity at the heart of Thomson’s book is the profound belief not only in the intrinsic value of each and every human life, but also the conviction that all people, whatever their limitations, have the potential to live lives that build on their capabilities and maximize their choices and freedoms.

Still, it is no easier for Thomson than for any other parent to accept the full implications of her son’s disability, or that, at a certain point, Nick exercises his freedom by choosing to remain much of the time in bed, to minimize his pain. Thomson writes honestly about this, as well as about her struggles with the bureaucracies in both Canada and the United Kingdom as she battles for appropriate services for her son. Having myself witnessed similar battles fought by hundreds of parents with disabled children over the past three decades, I know how challenging and infuriating these can be, even for someone with Thomson’s tenacity, intelligence, resilience and sense of humour. In addition to these personal qualities, Thomson has above-average social and financial resources at her disposal. Thomson’s husband is James Wright, Canada’s high commissioner in the UK, and while located in England, they live in a mansion and move in diplomatic circles. Even so, Thomson has had to struggle to arrange the necessary educational, medical and other services for Nick. For the first 18 years of Nick’s life, she herself provided around-the-clock care for him, because there were no alternatives available. At Nick’s birth, Thomson had a career as an actor, director and teacher, which she was forced to halt due to Nick’s intensive needs.

The current situation essentially pits the freedoms of disabled children against those of their mothers.

Which brings us to the issue of gender. Typical of what almost invariably happens in families with disabled children, it was Thomson, not her husband, who sacrificed her career to take care of Nick. In fact, Thomson’s husband’s career blossomed during the 18 years that she was at home with Nick, performing numerous functions that—as she insightfully notes—one generation earlier were carried out by nurses. (The list of the daily care and nursing functions Thomson performs is eye opening, even rather shocking.) Yet Thomson explicitly acknowledges the relevance of gender only in chapter 15 (out of a 17-chapter book), when she cites a feminist scholar from 1987 regarding the “invisible work” that women perform in their families and communities. One wishes that Thomson had positioned this analysis more centrally and earlier in her book, and also included some more recent literature. That said, she is correct in her assertion that some mothers may want to stay at home and care for their children (disabled or not), but that this decision should always be a matter of choice, not coercion. The fact that Thomson lasted for 18 years in the role of full-time caregiver before hitting her limit does not mean that she should have been exploited in this way by the state. The current situation, as she points out, essentially pits the rights and freedoms of disabled children against those of their mothers and, of course (because of the children’s greater dependency), the mothers consistently lose.

This set of arrangements, Thomson correctly writes, is both unjust and unethical. It is also impractical. All the research (including my own) on families with disabled children is unanimous in concluding that adequate, accessible social services and supports are crucial for them, even for strong, “capable” families such as the Thomson-Wright family, with its impressive resilience, love and mutual respect.

In her final chapter, Thomson focuses on the urgent need for social policies that facilitate true partnerships between governments and families caring for individuals with disabilities. She praises programs such as the Canadian Registered Disability Savings Plan, and calls for tax initiatives such as income splitting where one parent is staying home to care for a disabled child, as well as a reorganization of our health, education and social services so as to better serve people with disabilities. These suggestions make good sense, but to these I would add making active use of the law. This is the approach adopted by the AODA Alliance, a disability consumer advocacy group that works collaboratively with the disability community and with government to promote the interests of persons with disabilities. They advocate for the full implementation of a comprehensive disability act and work to hold accountable the Ontario government, which has not yet met even its own stated commitments in this regard. It appears, unfortunately, that the moral and ethical claims for the rights of disabled people in this province have thus far not resulted in government responsiveness, so the AODA Alliance, in my view, is wise to make use of the law. After all, when morality fails, the law is one’s only recourse.

This searching and intelligent book will hopefully assist the advocacy efforts of people like Donna Thomson and groups like the AODA Alliance in obligating our governments (both provincial and federal) to create the kind of caring and mutually responsible country that Canada has the potential to be. Nick, like every other Canadian (abled or disabled), deserves no less.

Nora Gold is a former social worker and social work professor who worked for many years with the families of children with developmental disabilities and has conducted research in this field. She is currently at the Centre for Women’s Studies in Education (CWSE) at the Ontario Institute for Studies in Education at the University of Toronto (OISE/UT), and is the founding editor of the new literary journal, Jewish Fiction .net. 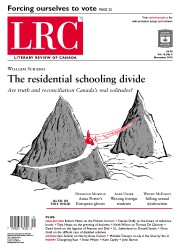