Cascadia’s Fault: The Deadly Earthquake That Will Devastate North America

On February 4, 1975, an earthquake of magnitude 7.3 struck the city of Haicheng in northeast China, killing more than 2,000 people, injuring almost 28,000 and damaging 90 percent of the buildings. In spite of this tragic outcome, the local authorities claimed victory. Six hours before the event, seismologists had warned about the disaster, and most inhabitants stayed outdoors. Had this prediction not been made, some 150,000 people may have died during the cataclysm.

The news pleased people in Chile, Japan, Tibet and other areas of the world recently touched by major earthquakes. But their hopes for a safer future were short-lived. On the night of July 28, 1976, a magnitude 7.6 earthquake struck the city of Tangshan, east of Beijing, without warning. How many people perished is not known. Some sources put the number at 250,000; others indicate more than twice as many.

The success in Haicheng was never repeated, and later proved to have been a lucky overlap of events. In the late 1960s, the State Seismological Bureau in China had identified the province of Liaoning, where Haicheng is situated, as a seismic-prone zone for the next few years. Consequently the region was carefully monitored. Several tectonic movements, including a land shift in the nearby Bohai Sea area, led in 1974 to a forecast for a major earthquake within two years. An intense educational campaign kept the population on alert, so when some experts issued a warning after several foreshocks, a combination of organized and spontaneous activity drove people out of their houses. At 7:36 p.m. local time, when the earthquake struck, most citizens were neither at work nor asleep, and they stayed outdoors. An analysis published in the Bulletin of the Seismological Society of America in 2005 called the Haicheng prediction “a blend of confusion, empirical analysis, intuitive judgment, and good luck.”

The best predictions seismologists can do these days are probabilistic. On February 2, 2007, for instance, they warned of a higher than usual risk of a strong temblor in Cascadia, the region that comprises parts of British Columbia, Washington, Oregon and California. A team of seismologists at the Geological Survey of Canada had noticed a series of slight tremors along Vancouver Island. This phenomenon was not new to them. They had registered it every 14 months since 1999. During the 10 to 14 days these tremors take place, big earthquakes are more likely than usual.

Garry Rogers, one of the senior scientists on the team, pointed out that there is no reason to panic. He came up with a metaphor to suggest the level of danger. We drive cars knowing all the time we could have an accident. We also accept that collisions are more likely during intense traffic. “Right now,” Rogers said in 2007, “we are in the middle of rush hour.”

Understanding the likelihood of a catastrophic earthquake in this region was not an easy feat. In Cascadia’s Fault: The Deadly Earthquake That Will Devastate North America, journalist Jerry Thompson describes how seismologists discovered the danger that threatens five large cities—Sacramento, Portland, Seattle, Victoria and Vancouver—and the communities spread among them. The effects of such an earthquake depend not only on its magnitude and the distance from the source, but also on the geological conditions. For Victoria and Vancouver, for instance, we have maps that depict the levels of risk, which vary considerably with the location. Apart from that, we know that wood houses may survive even large temblors, but it is not clear whether the tall buildings in downtown Vancouver and Seattle would withstand the resonance effects that may occur during the three to six minutes an earthquake of magnitude nine, or higher, lasts.

As late as the 1970s, scientists believed that Cascadia was free of such disasters. What made them change their minds reads like a detective story in Thompson’s book. They found out recently that some 20 such events took place in the past ten millennia, the last one hitting the region on January 26, 1700, producing a tsunami documented in Japan and recorded in the oral tradition of British Columbia’s First Nations. Thompson describes with masterly skill the events that led to this scientific breakthrough.

A point he presents is whether these earthquakes cluster in time, an issue Simon Winchester also touches on in his foreword to Cascadia’s Fault. In fact, mathematicians have known for some centuries now that all probabilistic events cluster: it is very unlikely that they occur at equal time intervals. In spite of the book’s suggestion that some mysterious laws may lurk behind the timing of these earthquakes, the data do not justify any pattern. No useful predictions can be based on any statistical analysis.

Thompson has dealt with catastrophes as a journalist and filmmaker for many years, and thus has had the opportunity to meet and interview scores of scientists who specialize in the tectonics of Cascadia. Since he lives near Vancouver, the subject concerns him directly. His passion for it pervades his well-crafted writing. He also weaves science with stories about the people who make it and those who have witnessed extreme events in other parts of the world.

Most of Thompson’s rendering of science is accurate, showing a good understanding of what he learned from experts in seismology, fluid dynamics, radiocarbon and tree dating, topography, civil engineering, GPS tracking and other fields he encountered in his investigations. In a few places, however, he is not on top of his research. For instance, he states that an earthquake of magnitude 9.5 is more than 32 times stronger than an earthquake of magnitude 8.1. He founds his claim on the fact that a one-point increase on the magnitude scale corresponds to approximately 32 times more energy. However, 9.5–8.1=1.4, which implies that the former earthquake is about 126 times stronger than the latter. Moreover, this number does not follow from what “some studies have estimated,” as Thompson writes, but from some simple mathematics1. Fortunately, such slips are so rare that they do not diminish his achievements.

The book’s strongest point is the convincing presentation of the scientific arguments that deem Cascadia to be North America’s most dangerous tectonic zone, implying that the next catastrophic earthquake will be the largest megadisaster ever encountered on the new continent. As a mathematician, I do not accept the truth of any statement, the more so of a huge one as this, without good arguments, which means that I must see why there is no other possible explanation for some established facts. Therefore I appreciate the efforts seismologists took to demonstrate, beyond any doubt, that Cascadia went through dramatic earthquakes in the past and will experience them in the future. Thompson definitely understands the importance of getting the proof right.

He also advises you what to do when the Big One strikes. He tells you, for instance, to brace for a tsunami after a large earthquake if you are near the coast. Be informed about the evacuation routes; do not wait to see the wave or hear the warning siren, but move to higher ground immediately. Act quickly to save your life.

Cascadia’s Fault is an engaging volume, which conveys how important science and mathematics are for survival. I learned many things from it, and, at times, I could not put it down. This book is a mustread for every Cascadian and for all those who want to be up to date with the latest research about tsunamis and earthquakes.

Florin Diacu is a professor of mathematics at the University of Victoria and author of The Lost Millennium: History's Timetables under Siege, whose second edition was published in 2011 by Johns Hopkins University Press. 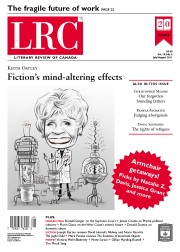