Opening My Heart:  Journey from Nurse to Patient and Back Again

A Health Insider Becomes a Patient

What is it like when someone who works in health care becomes a patient? Two new books, one written by an intensive care nurse, the other by a health policy analyst and patient advocate, provide personal narratives of going under the knife. One story goes well and the other does not.

Tilda Shalof, author of A Nurse’s Story: Life, Death and In-Between in an Intensive Care Unit, learns by accident at a very young age that she has a defective aortic valve and could “drop dead at any time.” With the experience of caring for a depressive mother and ill father and with a healthy dose of denial, she becomes a highly specialized ICU nurse. She marries, has two children and loves her work. Shalof is a born storyteller and weaves in threads of moving encounters with patients as she explains in Opening My Heart: A Journey from Nurse to Patient and Back Again how her own leaky valve catches up with her.

“I’ll admit it,” she writes, “I’m an adrenalin junkie, getting high on the drama and action and grappling with the various complicated ethical dilemmas, but my real fix is stories. I never tire of being let into my patients’ lives. I’m insatiably curious about the multitude of challenges that people face and the infinite ways they respond to them.”

At a certain point, she cannot ignore her own illness story: she becomes increasingly fatigued and short of breath and exhibits “Schaufenster schauen,” where a patient with cardiac disease pretends to be enthralled with the scenery, but is really catching her breath.

More than a little knowledge is a dangerous thing. Shalof knows she will require surgery but, having worked in intensive care for many years, also knows everything that can go wrong. Aided (or hampered) by Google searches, she compiles a list of potential surgical and post-operative mishaps, which reads like poetry, but also deepens the book’s suspense and our concern for her as we read on. Her stoical husband and an encounter with a mindfulness teacher do little to allay her fears. It is when her friend Janet tells her, “You don’t have to be mother, nurse, or friend. Take a break from all of that. Just let go and be a slab of meat [on the operating table],” that she settles down.

Shalof tells us a lot about nursing as we go and she holds nurses as accountable for patient safety as doctors, a welcome commentary in a genre that often doctor-bashes. She laments the training of young nurses who embrace high technology but who are also taught that the act of caring and remaining at the bedside is somehow beneath them. Nonetheless, she patiently helps a newly graduated colleague start an IV when she has not done one before and revels in the post-nightshift Bagel Club encounters with experienced nurses who share her values. At one point, she notices the hands of these feisty women and marvels at what those hands have accomplished and how they have demonstrated deep caring, even love, over the years.

Shalof is a born storyteller and weaves in threads of moving encounters with patients as she explains how her own leaky valve catches up with her.

Shalof gets her operation and is fortunate to have it performed by a surgical star who has had the very procedure he will perform on her named after him. (An interesting twist is that he does the surgery with an injured arm!) Without giving too much away, the operation is a success but not without complications; she requires a respirator, loses blood and becomes severely anemic. She courageously admits that, like many cardiac patients, she becomes depressed in the post-op period and requires medication for it. But where this story shines is when the author details what it is like to be in the hospital bed rather than peeling back the curtain around it: Being in and out of consciousness after coming to. Overhearing the conversations of doctors in the hall and nurses at the nursing station. Figuring out whom she can trust on her care team. Taking a peek at her chart. Remembering that it is her nursing colleagues who will keep her alive or, through error and indifference, injure or even kill her. She reminds us that healers need the right mix of awe and fear to do their jobs safely, to remain accountable. In Opening My Heart, Shalof instructs without preaching, critiques with humility and humour, and embodies what we try to teach our medical and nursing students: narrative competence. This all-important skill can be defined as the ability to receive, tell, co-construct, interpret and be moved by the stories of illness (including our own).

In contrast, we have Sholom Glouberman’s My Operation: A Health Insider Becomes a Patient, which recounts his experience of complications and miscommunications after a bowel resection. This is a different story, as regrettably he is among the 3 percent of patients for whom the necessary surgical procedure goes wrong. Things are also missed in the post-operative period. The reader empathizes, but is unlikely to be moved by the story, because it often reads like a complaint to the College of Physicians and Surgeons of Ontario. Embedding actual citations (with the real names of the “culprits” left in) from his medical charts and emails from family members does little to enrich what appears to be a very one-sided account. (In reality, all illness stories are in fact co-created and change over time.) The author reminds us that he is a philosopher-in-residence at a Toronto institution and has consulted about health policy at some very important hospitals in Canada and the United Kingdom. Yet his apparent naiveté about how hospitals actually function day to day leads us to wonder if he has ever spoken to real, non-VIP staff members in the facilities where he has consulted.

The medical residents who treat him “seem bored.” The cleaning lady “glowers” and may not even “speak English.” He names the (Asian) “high priestess of echocardiography” who sees him and wonders if she will “read his fortune.” An x-ray technologist “grudgingly” does her job. Even his much-quoted bowel surgeon, who acknowledges his suffering, seemingly tries to distract him and attends a debriefing about his case with the CEO of the hospital, falls woefully short in the author’s view.

Glouberman is at his most convincing in his role as a patient advocate, a role he takes seriously; this is the main reason he has written the book. As the founder of the Patients’ Association of Canada, he is absolutely correct to assert that all patients require education and support, ongoing explanations and reassurance, and continuity of nursing and medical care. Our system is indeed flawed at times and the voices of patients need to be heard. But unlike Shalof, Glouberman’s rather linear critique does not fully weigh, imagine or incorporate the stories of those around him, whether they be fellow patients or fatigued residents, nurses and support staff in an often unforgiving hierarchy.

Allan Peterkin, is a Toronto doctor and the author of twelve books for adults and children. He is a founding editor of Ars Medica — A Journal of Medicine, the Arts and Humanities, a senior fellow at Massey College and head of the Program in Health, Arts and Humanities at the University of Toronto. 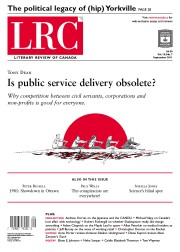