Shoot It! Hollywood Inc. and the Rising of Independent Film

“I stuck a camera in the middle of the street and just shot people.”

Reflecting on his origins as a film maker to the Vancouver movie critic and journalist David Spaner, the African-American filmmaker Charles Burnett (Killer of Sheep, To Sleep with Anger) taps the very heart of the so-called “independent” movie-making spirit. Indeed, it is the spirit that gives Spaner’s book on the history of non-studio filmmaking its title—Shoot It! Hollywood Inc. and the Rising of Independent Film—and that links Burnett with such other noteworthy do-it-yourself types as Orson Welles, Dennis Hopper, John Cassavetes, Jim Jarmusch, François Truffaut, Jean-Luc Godard, Susan Seidelman, Miranda July, Nicole Holofcener and Catherine Breillat.

Burnett has not made a feature in quite some time. His fiercely independent spirit has ensured his marginalization in short films, TV movies and documentaries for most of his career, and this part of his story is as common, if not as inspiring, to the history of American independent filmmaking as the initial screw-it-and-shoot impulse. For a great many of the filmmakers cited by Spaner as inspirational independent spirits—Welles, Nicholas Ray, Hopper, Cassavetes, Henry Jaglom, Seidelman, Tom DiCillo, Mary Harron—the part of the story concerning the struggle to stay independent is longer, more dramatic and ultimately dispiriting than the decision to be independent. For many people, declaring oneself independent is what one does before going home and wondering why the phone does not ring. 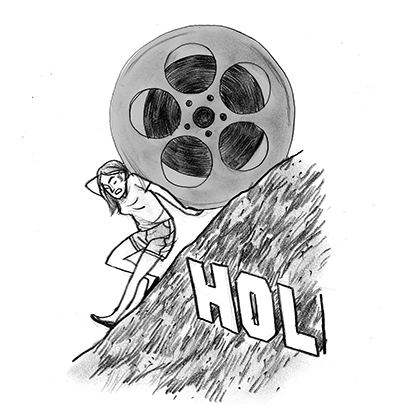 Just what is it, anyway? When everybody from George Lucas to Quentin Tarantino and David Cronenberg to Michael Moore can call themselves or be called independent, what can the word possibly mean? For Spaner, it is both specific and a little arbitrary: it means deliberately and concertedly working outside the studio system (itself a -slippery entity), working in the service of personal or artistic vision and not commercial interests (ditto), having an apparently progressive political inclination (ditto ditto) and unashamedly living the legacy of reduced notoriety and success that comes with declaring oneself not in it for the money: something that massively profit-driven industry is most unsurprisingly unlikely to endorse.

As the author writes: “So ‘independent’ in Shoot It! refers to movies made outside the studio system with a non-commercial sensibility. Independent films are made by independent human beings who won’t revamp their art because of a test screening or some whim of a financier or producer.”

It is hard not to like the ring of this, especially if you have got any sympathy whatsoever for the idea of the artistic human spirit triumphing over the craven forces of compromise and commerce. (Who does not have at least some sympathy, even feigned or misdirected, for that? Isn’t that what just about all popular mythology—including the dark forces of the studio system—trucks in?) But as a definition of a specific phenomenon or object it is a little leaky—what, really, is an “independent human being”?—and Spaner’s subsequent attempts to patch it up only draw more water to the gaps: “this book is about independent narrative filmmaking,” he says, presumably because “the best movies bring characters to life.” Ergo, independent is not only non-commercial and politically progressive; it is story based and character driven. Which means, from the get-go, we are opting to exclude all forms of non-narrative and non-fiction cinema, forms many might well consider essential to any discussion of truly independent and non-commercial filmmaking. It also means we are going to be bumping, constantly and compromisingly, against the forces of darkness, because there is nothing those forces do better than to tell made-up stories with characters we like to watch. In other words, the slope slips from the first step.

Potentially, this suggests another way of regarding the book, although it seems not to be the way the author himself regards it: as the history of the people who chose to live on that slope and their struggles to maintain purchase on it even as gravity exerted its relentless and remorseless pull. If you are going to make -character-driven dramas—even grittily realistic, pro–little guy character-driven dramas—you are always going to be in the undercurrent’s reach of the commercial mainstream, in the same way that if you make independent pop music you will always be in listening distance of corporate ear candy and if you draw independent comics you still fall under the shadow of Gotham City. In any of these endeavours compromise is never more than a hit away. This is the myth of authenticity that surges through just about all the popular arts—rock, comics, filmmaking, etc.—the idea that “getting back to the roots” will restore to the art form its lost, compromised or abandoned truth-telling power. As dubious as it may be as truth itself, the myth is an absolutely necessary agent of cyclical revitalization. It is what keeps the rules of creation flexible and changing, and it is what inspires people to do things differently.

As a historian of films and filmmakers who have tried to resist this pull while working so closely to the magnetic core, Spaner has created a chronicle of largely within-(or near)-the-system resistance. Shoot It! generates its own narrative momentum by tracking the persistent maverick impulse in a system that has attracted and brutalized mavericks from the very beginning. This is the commercial movie industry’s eternal and perhaps definitive paradox: it celebrates individualism and vision insofar as these qualities adhere to popular mythology and generate popular enthusiasm, but it must also contain and conventionalize those qualities if it is to exploit them for profit. If you work close the machine, you will get screwed, because that is what the machine was built to do.

As a history of idealism, however, Spaner’s book provides an often stirring account of stubborn obliviousness to this principle. He writes of the generation of leftists and European émigrés who came to Hollywood in the 1930s and ’40s and thought they would be free to buck the system there, a great many of whom were subsequently blacklisted, exiled or incorporated. He writes of the lasting just-shoot-it legacy of Cassavetes, the French New Wave, the post-countercultural New Hollywood and the brief bursts of brilliant underground energy that surfaced and flourished in the 1980s and ’90s. He tells of the other waves, those that rolled and broke in England, Korea, Romania, the off-Hollywood United States and even English Canada. Certain refrains are heard: somebody sees a movie that inspires them to go out and make their own, which in turn inspires other filmmakers to do the same. Momentum is built, a movement stirs and then a wall is hit. Hollywood comes seductively calling or bullishly threatening. The maverick impulses are either absorbed or extinguished or both, another James Bond or Batman movie gets released around the world, and everybody wonders what happened to independence. Then, somewhere in the dark, the cycle begins again.

In his years of travel covering film festivals around the world, Spaner has sat down with a lot of these past and present mavericks, and his book is enlivened by their prickly presence. He speaks to former studio renegades, such as Stewart Stern (screenwriter of Rebel without a Cause), industry blacklistees such as Walter Bernstein (Fail-Safe, The Front) and political exiles such as Norma Barzman (The Locket). He speaks to Hollywood countercultural veteran Henry Jaglom (A Safe Place), 1980s feminist indie Susan Seidelman (Desperately Seeking Susan), and 1990s bright-hope Tom DiCillo (Living in Oblivion). He tracks the independent impulse as it burned through Quebec during the 1960s and started brush fires—subsequently largely stamped out—in Toronto and Vancouver in the 1980s and ’90s. He delivers the uncompromising voices of young Korean filmmakers of the new millennium and their counterparts in Romania.

Here is DiCillo talking to Spaner about the making of Delirious, a five-year-in-the-making indie effort that premiered at the once proudly indie—and subsequently incorporated—event called the Sundance Film Festival in 2006:

We showed it at Sundance, and we won three awards at San Sebastian, then it disappeared pretty much off the face of the earth, after five years of work. Most people don’t even know that I made that movie. The people who do know it never played, and that’s all they know about it. That’s so painful, you can’t even comprehend; you feel, on the darkest days, that you have no place in this environment.

DiCillo’s bitterness is understandable up to a point, and that is the point where, arguably, one’s sense of independence is put to the 21st-century test. Like England’s Ken Loach—who elsewhere in Shoot It! tells Spaner “we shouldn’t lose sight of the main objective, which is that cinemas—a valid and, I think, permanent medium—should be able to show a diverse range of films from all across the world”—DiCillo imparts perhaps inevitably self-defeating importance into getting one’s movie shown in first-run theatres. It is a sweet vision, but that day, especially for the anti-Hollywood filmmaker, may be over. Listen then to France’s Catherine Breillat, who sees cable and digital distribution as not only an alternative means of distribution but a form of liberation: “We’ve seen the success of specialty TV channels around the world. I think that’s the possible salvation for independent cinema. We’ll reach an audience; it’ll be a specialty audience, but an audience that can see our films whenever they choose to.”

This is the future, like it or not: more films on smaller screens watched by folks anywhere they want whenever they want. So, if you really want your movie to be seen—if you made it so it can be seen—how could that be anything but bright?

Still, as long as there are filmmakers who commit themselves to making character-driven dramas on their own terms, and who dream of seeing their work playing on a level megaplex playing field with Avatar, there will be heartbreak stories like DiCillo’s. And as long as the mainstream commercial movie industry continues to make character-driven dramas, no matter how abjectly stupid, demeaning or effects driven, those independent filmmakers will be chewed up and either swallowed or spat out.

The most impressive thing then is that they keep doing it. Despite history, despite the odds, despite all the abundant evidence in front of them, they continue to tinker with the machine’s formula in hope of changing the machine itself. Not going to happen, at least not in any way that will ever fully satisfy the independent human spirit. For that would make the machine human and eliminate the need for the spirit. In the end, that is the most -hopeful and resilient sign of all: what cannot be killed is our refusal to accept reality. That is why we go to movies, and that is why some of us make them too.

Geoff Pevere’s latest book is Gods of the Hammer: The Teenage Head Story (Coach House, 2014). He is the program director of the Rendezvous with Madness Film Festival in Toronto and is currently at work on a book about the mythology of rock music.