Lords of the Sea:  History of the Barbary Corsairs

When I began researching the career of doomed explorer Henry Hudson about ten years ago, I happened upon mentions of contemporary English seafarers who had converted to Islam and made a terrifying name for themselves as Barbary pirates. They seemed to be a sort of 17th-century John Walker Lindh, the young American who went off to Afghanistan to fight with the Taliban against troops from his own country. The analogy is not perfect, as the English pirate converts were clearly in it for the money and their conversion secured a flag of convenience for their predations. Nevertheless, the fact that English merchant ships were preyed upon by North African pirates commanded by English converts to Islam remains intriguing.

Alan G. Jamieson’s Lords of the Sea: A History of the Barbary Corsairs does mention one of the most notorious of this lot, John Ward, aka Yusuf Reis. His book, however, is about much more than Ward and other such converts who persisted in this line of business into the late 18th century. Jamieson is determined to cover more than 300 years of sprawling, complex history relating to the Barbary Coast’s high seas robbers, slave raiders and ransom artists, from the mid 15th century to the early 19th century, and you will find no mention of Lindh.

Instead, Jamieson approaches his subject from his own modern perspective, launching his study by considering the modern Somali pirates. He argues that despite some contemporary notions that the Somali freelancers are heirs to the Barbary corsairs (the term he prefers to the implicit lawlessness of “pirates”), they are nothing of the kind. Jamieson says the Barbary corsairs operated much as European (and North American) privateers did, under state regulation. His main goal is to tell their full story. Americans, he says, really only know about them from their final phase, when late 19th-century actions inspired the creation of the U.S. Navy as the young republic resolved to stand up to the Barbary states and avoid the practice followed by European countries of paying protection money. Europeans, he further argues, scarcely know anything about the corsairs’ history. 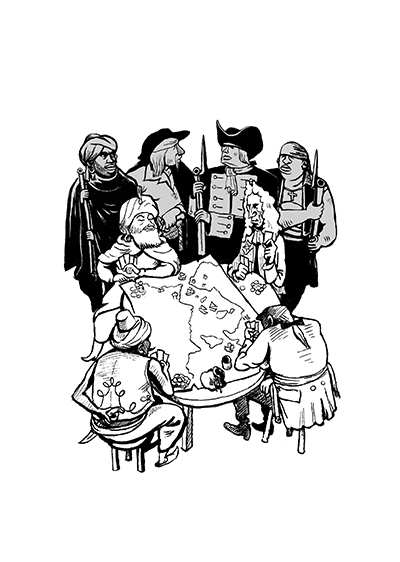 I do not envy Jamieson his task. Setting more than three centuries of piracy within the convoluted history of Europe, the Mediterranean and North Africa, and Iceland and North America for good measure, while also juggling the great divide of Christianity and Islam and carrying it off in about 211 pages of narrative, is no small undertaking. Context as a result is necessarily terse. Reading the introduction and conclusion first will help the reader to contextualize the names, places and events that come thick and fast in the text.

The corsairs targeted Christian ships and the coasts of Christian countries on the Mediterranean, from about 1500 to 1800. Their name “probably derives,” says Jamieson, from the Berber tribes of northern Africa. Rather than straightforward pirates, they were the naval vanguard of the Ottoman Turks, who were becoming the most powerful Islamic state in the world at that time. They patrolled the western reaches of the Ottoman Empire from bases in Algiers, Tunis and Tripoli, with outlying colleagues in Morocco as well. One of the main reasons the Barbary corsairs flourished, according to Jamieson, was because of “cynical great power calculation.” The northern countries on the rise—France, England and the Netherlands—found it to their advantage to have the corsairs attacking the merchant fleets of smaller maritime states. Moreover, since the main powers were constantly at war with each other, they were inclined to encourage the corsairs to attack the ships of their enemies while leaving their own alone.

Lords of the Sea reads like a legal brief, as Jamieson (who also has a law degree) serves the history straight up, without any dramatic set pieces, despite the inherently epic nature of the material. The Battle of Lepanto in 1571, for example, receives a dry, bare-facts account, and left me wondering what the “last and greatest battle between galley fleets” must have been like when (as he reports) the winners lost a dozen ships and 10,000 men, while the losers had more than 200 galleys sunk or captured and lost a stunning 30,000 men, while in the process 12,000 Christian galley slaves were freed.

Another historian might have reached for a copy of Edward Saïd’s Orientalism to deconstruct western notions of the “Other” of Islam as expressed through Jamieson’s persistent portrait of Barbary pirates as cruel, bloodthirsty hoodlums. The jacket flap copy fuels this demonization by declaring that “murderous Muslim pirates from North Africa’s Barbary coast seized and enslaved more than a million Christians.” But Jamieson counters the predictable jacket text by making it clear that these pirates were part of a clash of empires, often operating under the aegis of outlier states of the Ottoman Turks. And the Muslim-Christian divide between the 16th and 19th centuries was always subject to individual opportunism and cynical alliances.

A noteworthy element of this book is slavery, which was rife in the Mediterranean world. I would have welcomed more attention to it, as Jamieson’s treatment of slave labour in the Christian world is far too limited and leads to unhelpful comparisons with the Barbary raiders. Jamieson writes that in the 16th and 17th centuries, “the Atlantic trade in black [African] slaves was probably at a lower level than the seizure of white Christian slaves from Europe by Muslim slave raiders, chiefly the Crimean Tatars and the Barbary corsairs. Indeed in the sixteenth century the Barbary corsairs alone may have taken more Christian captives than the number of black slaves that the Christian Europeans shipped across the Atlantic from Africa to the Americas.” But a Barbary eclipsing of the African slave trade in those early centuries should not surprise anyone, as there was a limited market for African slaves in the Americas at that time. By focusing on shipping activity for his understanding of slaving (and slave taking), Jamieson fails to recognize how the English, Spanish and French overseas colonies sourced slaves among indigenous peoples, long before labour demands ramped up their use of Africans.

Of course, Christian states of the Mediterranean also abounded with enslaved Muslims. Naples alone, Jamieson notes, may have had as many as 10,000 circa 1600, but he is skeptical of estimates that there were as many Muslims enslaved in Christian Europe as Christian Europeans in Muslim states.

In Jamieson’s telling, the centuries of antagonism involving Barbary corsairs is a conflict between “Christian Europe” and the Muslim world. He nevertheless does explain the complications of internecine Christian strife that at times saw the Barbary corsairs attack Catholic Spaniards and Protestant English as infidels while the Spanish went after the English as heretics. He uses the terms “white Christian slaves” and “white slavery,” however, without regard to the historical context of “whiteness,” an evolving and self-serving concept of racial privilege inseparable from the slave economies of Christian empires. The pseudo-scientific racial terminology emerging during the time of the Barbary corsairs was not entirely prepared to admit to the whiteness club the southern Europeans being enslaved or ransomed by these raiders. The ideas of “white” and “Caucasian” would conveniently supplant “Christian” as the gold standard of individual liberty, especially as colonial American slave laws determined that being Christian was not enough to merit freedom; one had to be lily white as well.

Acknowledging this evolving and reprehensible human zoology could have helped Jamieson contextualize official British indifference to Christians enslaved in Barbary galleys during the age of Nelson, when the Royal Navy was largely satisfied to look the other way as Barbary states fulfilled provisioning contracts. He quotes Nelson’s fury in 1798 over his country’s refusal to crack down on the corsairs: “Never let us talk of the cruelty of the African slave trade while we permit such a horrid war.” Jamieson lets this supercilious indignation go unchallenged, as black Christians remained firmly enslaved in the millions. But the African slave trade, so immensely profitable to British merchants and ship owners, was a monstrous obscenity that needed to be talked about—and it was, regardless of the Barbary depravities. Colonial Upper Canada had already ended the importation of slaves (and introduced gradual emancipation) in 1793, and the British ended the transatlantic trade in 1807.

The age of the Barbary corsairs essentially ended in 1830 with the French conquest of Algiers. With the corsairs gone, Jamieson’s interest returns in his conclusion to modern Somali pirates and what western powers can do about them. Unfortunately, since his position is that the corsairs derived their dominance from their strong connection to their time’s geopolitics while the Somali pirates are simply mercenary criminals, today’s pirates “cannot be considered as the heirs of the Barbary corsairs.” So the comparison, by the author’s own admission, is not that fruitful. The interesting point he makes is that the international shipping industry has changed immeasurably in the past 200 years. Whereas the corsairs would attack a French ship flying a French flag and crewed by Frenchmen, thus incurring the wrath of France, a modern merchant ship on the Indian Ocean today may be owned in one country, fly the flag of another and have a crew from all over the world. “The multiplicity of national interests involved in vessels captured by the [Somali] pirates is a source of weakness not strength,” Jamieson concludes. His one practical suggestion is that western countries should assist the government of the semi-autonomous region of Somalia known as Puntland, where most of the pirate bases are located, to help strengthen it enough to suppress the pirates. However, he admits that “any such process is unlikely to be completed quickly.”

We might wish to give the issue of Somali pirates a pass and wonder instead how the Christian West’s crushing of the Barbary corsairs, largely through French colonialism in North Africa, eventually led to a global sense of indigeneity that takes no satisfaction in the end of the Barbary chapter of “white” slavery. In deeply racialized and bloodily sectarian “Christian” Europe, the moral high ground was never more than a quagmire.

Douglas Hunter is a past winner of the National Business Book Award and a finalist for the Writers’ Trust Non-Fiction Prize and the Governor General’s Literary Award.

Damned if you do and damned if you don’t seems to be Douglas Hunter’s approach to book reviews. On the one hand my book, Lords of the Sea: A History of the Barbary Corsairs, is as boring as a legal brief, yet on the other hand it “demonizes” the Barbary corsairs as “cruel, bloodthirsty hoodlums,” an effect rarely achieved by dry legal prose. Hunter feels I have not done justice to this “epic” story. No doubt my book is insufficiently swashbuckling for him, lacking a catchy subtitle like “How the Barbary Corsairs Terrorized the Seas and Changed the World.”

If there is one subject that has over the years attracted far too many romanticized and swashbuckling books, it...