Smoke Signals: The Native Takeback of North America’s Tobacco Industry is one of those rare labours of love, rich in materials, insights and wisdom and yet most likely to be ignored by “scholars.” It is the irony of contemporary academia that some works that are the products of practical experience and sweeping insights suffer benign neglect on the basis that they lack the form and framework of “academic rigour.” This paradox may explain why author Jim Poling Sr. himself pre-emptively avows that “Smoke Signals is not in any way an academic study.” Despite this disclaimer, Smoke Signals is a serious piece of work, and, in some material respects, a tour de force.

As I have argued elsewhere, plants and crops have had more enduring political, military, economic and racial impact on the colonial experience than perhaps any theft of land, gold, silver and precious gems. The colonial conquest and near annihilation of North American indigenous groups would not have been possible without the contributions of certain crop items such as tobacco, wheat, cotton and rubber. In this important respect, Smoke Signals lends a voice to the silent tale.

Tracing the origins of the story to the Manitou of the Andes, where tobacco—a member of the strange nightshade family of plants (which includes the potato, tomato and chili pepper)—was developed, the book explores virtually all the historical, industrial, political and moral controversies surrounding this now ubiquitous substance. 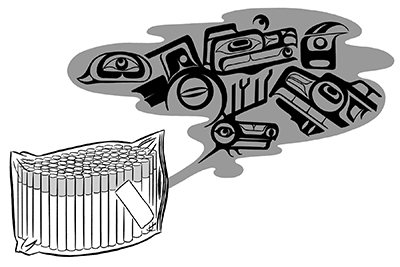 Apart from being one of the most traded commodities on the face of the planet, tobacco captures the unresolved conflicts and contradictions of the colonial encounter and experience. Poling begins by elaborating on the different meanings embedded in tobacco. Tobacco was used by the Native Americans in the Andes and middle Americas for religious purposes, social bonding and medicine. It was more than a narcotic; it possessed virtuous as well as deleterious qualities. Tobacco had medicinal use in the treatment of hornet, bee, scorpion and wasp bites and could be used as an insecticide. Its negative properties, as an addictive narcotic and carcinogenic agent, are well known.

Poling quotes a study by Moravian missionary John Heckewelder in the late 1700s: “Eastern North American tribes carried large amounts of tobacco in pouches as a readily accepted trade item, and often smoked it, either in defined sacred ceremonies, or to seal a bargain.” Jacob Gottsegen adds that “Native Americans believed that tobacco is a gift from the Creator, and that the exhaled tobacco smoke carries one’s thoughts and prayers to heaven.” As Poling observes, “the Navajo believe that the universe could not be created until Sky Father and Earth Mother have smoked sacred tobacco.”

Tobacco has occupied a complex space at the interface between virtue and vice, greed and charity. It intertwines the noble with the base.

Early Amerindians cultivated tobacco and made significant contributions to the genetic refinement of the qualities of the plant. Not surprisingly, given the colonial attitudes toward non-Europeans, the intellectual contributions of Amerindians to the development of tobacco varieties never garnered respect or accolades in “scientific” circles.

Poling then likens the colonial contact with tobacco to the opening of a Pandora’s box. To the Europeans, tobacco was a major commodity for commerce and a veritable source of stupendous wealth, only surpassed by cotton. From then on, tobacco has occupied a complex space at the interface between virtue and vice, greed and charity. It intertwines the noble with the base.

The colonial encounter also marked what Poling characterizes as the “taking” or hijack of tobacco by European merchant classes and governments in the colonial project. The gradual introduction and gentrification of tobacco in Europe was a significant catalyst in the industrialization of tobacco farming in the newly colonized Americas. It is ironic that a plant product native to the Americas was one of the key catalysts to the takeover of the Americas by colonizing Europeans.

Poling implies that the dispossession of the Natives and the capture of the instruments of government combined to displace Native participation in the emergent tobacco economy in North America. But his failure or omission to explain how the Natives were excluded from the emergent tobacco economy is a serious flaw in the book. How was tobacco taken from the Natives to create a new economy? What were the institutional, regulatory and statutory mechanisms by which Native American participation in the emergent tobacco industry was nullified? The colonial project “took” rice, cotton, rubber, potato, etc., from the colonies but the taking of these important food crops did not exclude indigenous people’s participation in those economies. What made tobacco peculiar? Poling’s analysis fails to address this important question.

The economic complex of tobacco is perhaps best exemplified in its role in firing up the American revolutionary war. As Poling points out, tobacco export and taxes on tobacco sales were hugely influential in financing the war. In Canada, tobacco was equally important in shaping the early economy and polity. Events such as these set the stage for the moral contradictions embedded in the industrialization of tobacco, which the author then goes on to explore.

Tobacco is widely acknowledged to be addictive and yet some knowledgeable medical professionals and religious officials are well-known smokers. Governments love the revenue from cigarette taxes while lamenting the huge medical and human costs of smoking. Poling excels at teasing out the paradoxical relationship between governments and tobacco. And, as a cheap drug for the masses, no narrative on tobacco smoking would be complete without reference to those perverse human activities that often decimates the poor: war and military conflicts. Poling devotes one chapter to the close connection between the human costs of war and the use of tobacco. For example, from the American Civil War until the latter part of the Second World War, military authorities in the United States and Europe gave daily rations of cigarettes to soldiers to quench hunger, calm nerves and relieve anxiety. This practice ended in the late 1960s when the harmful effects of tobacco smoking became conventional wisdom.

By Poling’s account, it would seem that the appropriation of tobacco by governments and big tobacco manufacturers to the apparent exclusion of aboriginal peoples has for centuries been resented by indigenous and Native populations in Canada and the United States. He then suggests that the fungible nature of tobacco and the ease with which it can be smuggled and resold combine to make it a veritable instrument in redressing Native socioeconomic grievances. As governments have continued to treat tobacco as more and more of a cash cow, raising the sin taxes to very high levels (and hypocritically using the growing medical concerns about smoking to justify those tax increases), aboriginal groups see a chance to make money by smuggling tobacco and using their tax-free status to provide it to consumers at lower-than-standard prices.

Poling’s central argument about smuggling is that Native communities have been driven to this juncture by the industrial-scale destruction of their way of life. With these populations deprived of their natural resources and kept on reserves, the result has been a culture of dependency, alcoholism and increased suicide rates. In this toxic brew of hopelessness, tobacco smuggling has become a plausible escape route from a life of drudgery and penury. The unfinished business of dispossession of Native land and territories has also added to the complications of tobacco smuggling in North America.

The perfect geographical point for the smuggling of cigarettes would seem to be Akwesasne, the reserve that “straddles the St. Lawrence River, eighty miles south of Montreal. New York State and the provinces of Ontario and Quebec each cover pieces of it, but it is Mohawk land, governed by Mohawks.” As Poling notes, this parcel of territory “has been a centre of Indian resistance to European takeover for more than 250 years.”

Akwesasne goes beyond smuggling of cigarettes; rather, Poling writes, it captures the complexities and frustrations of the “unfinished” aspects of colonial seizure of Native land and resources. The St. Lawrence Seaway project devastated the Native fishing industry in Akwesasne. While the seaway brought economic boon to the governments of Canada and the United States, it destroyed the Akwesasne economy and way of life. In addition, the unabated pollution of the St. Lawrence River deformed whatever sea life was left. Tobacco and Akwesasne are enduring motifs of the colonial experience in North America.

Clearly, these structural and systemic anomies in society were bound to lead to violence and confrontation between the various actors. Five chapters in Poling’s book detail the episodic but recurring incidents of confrontation, smuggling of contraband cigarettes and, of course, media stereotyping on conflicts between state and Native groups. In the Native takeback of tobacco, mutual resentments have often surfaced. Given the violence and confrontation, it is often mystifying to watch the comical avoidance of the root causes of the anomie by various governments.

The issue is fundamentally about the destruction of the hunter-fisher-gatherer economy and the need to replace it with a modern economy that gives indigenous peoples a fair shake while acknowledging the centuries of genocide and cultural despoliation visited on them. It is not a journey into guilt but a recognition that grave wrong was done and that the injustice has contemporary impacts still visible and palpable.

Poling argues for a rethinking of the rules of engagement between indigenous groups and settlers in North America. Native takeback of tobacco and Native engagement with the tobacco business are not enough. The tide is turning against tobacco and thus the issue ought to be about laying the foundations for a post-tobacco economy in which Native peoples have a stake.

In sum, the issue is not about tobacco per se; it is about the unfinished business of the colonial encounter, the crying need for dignity and sovereignty of a group of people who have for centuries been abused, robbed and humiliated simply for being who they are—a family of humanity different only from other families in terms of skin colour and histories. Notwithstanding its shortcomings, in Smoke Signals, Jim Poling Sr. has done us a favour by his overview of and acute insights into the tobacco debacle. Smoke Signals should be taken seriously.