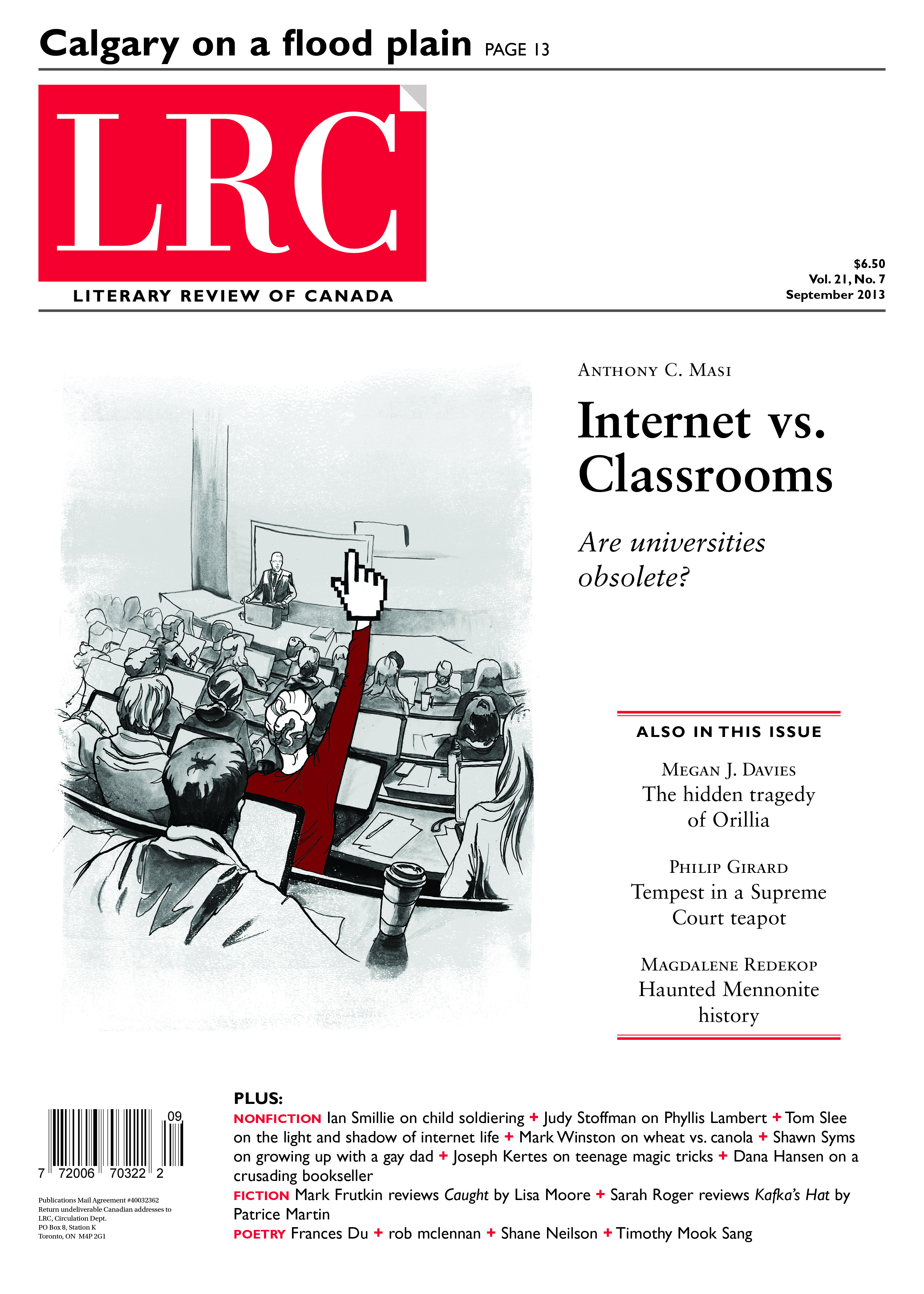 Generalizing about massive open online courses, or MOOCs, as Anthony Masi does in his essay, is tricky, because there is nothing uniform about their pedagogy. The original Downes-Siemens MOOC, for instance, was highly constructivist in its approach, meaning that its focus was much more on the construction of knowledge than its mastery or consumption. In this respect it is different from the majority of MOOCs available through Coursera, which often offer little more in terms of pedagogy than the traditional “sage on the stage,” only on video. Not all the new MOOCs are like this of course—some institutions participating in Coursera put more time, thought and money into their products than others. The point is simply that thinking of MOOCs as some sort of uniform technology is unhelpful.

But in a sense, pedagogy is as may be. The reason MOOCs have become a major issue in higher education—as Masi belatedly makes clear—is less due to their pedagogical potential, but more to their cost implications. It is certainly true that if completion of a MOOC can be shown to be equivalent to provide learning outcomes similar to those of an in-person class, and if institutions are willing to accept them as transfer credits toward their own degrees, then it could certainly lead to a significant restructuring of undergraduate education. But those are two pretty big ifs. I am more skeptical than Masi that they will be overcome.

A major reason for my skepticism is simply that I don’t really see much demand for this kind of education among current undergraduates. Studies of MOOC participants indicate that they are mostly over 30 and most already possess degrees. This is what has led people to describe MOOCs as “edutainment” (a term that is essentially correct even if it has overly dismissive overtones) for the already educated. First-time undergraduates—the ones whose financial needs are allegedly being met by this cut-price educational offering—are mostly notable by their absence.

That’s not to say that advances in electronic learning are unimportant. Masi correctly notes that there are a number of ways to blend electronic resources into classrooms that can be both pedagogically and financially beneficial. But the leap from that to saying that MOOCs are a game changer for higher education is a non sequitur. It’s not that they have no educational value; it’s just that when undergraduate students thinking about what they want from their education, MOOCs aren’t it. They want meaningful contact and interaction with teachers and peers, and—Quebec students apart, perhaps—they are prepared to pay for it. At least in relation to undergraduate education, that leaves MOOCs looking a lot like a solution in search of a problem.

Re: “Hacking Society,” by Tom Slee

Much thanks to Tom Slee for helping to put to rest the pastoralist canard that the internet (and the mobile) are killing community and family. As Slee says, we’re proud in Networked: The New Social Operating System that we’ve amassed a heap of Canadian and American evidence to show that the internet is sustaining—and expanding—family and friendship ties. And good for the LRC for publishing Tom’s piece—along with fine reviews of the research in political scientist Ronald Deibert’s Black Code: Inside the Battle for Cyberspace and communication scientist Gabriella Coleman’s Coding Freedom: The Ethics and Aesthetics of Hacking. Scholars are just so exasperated by evidence-free op-eds and blogs.

Yet our Networked book really isn’t about the internet itself. It is about the turn in North America to a networked society—and we mean social networks as well as computer networks. We show how when the internet and mobile devices came along, we’ve had a triple revolution that has changed our lives. The turn to social networks started well before the internet—I did my first research on this in 1969 in the East York section of Toronto.

Our evidence shows that we have moved from tightly bounded village-like social groups to social networks that give us flexibility to move among diverse social worlds, both local and far afield. Ask the folks in Chapleau, Ontario—which our NetLab studied—what they think of the internet. They’ll tell you it helped them reach out to family and friends across the continent, shop better and be more informed. As “Debbie” joked to us: “The Internet is like sex. Once you have it, you don’t want to give it up.”

Sure the internet is not perfect, but by a five to one margin, Canadians value how it connects them with their families. We respect what people tell us. We report and analyze what they say—both with numbers that get us beyond cherry-picked anecdotes, and with illustrative stories that make the numbers come alive.

Tom Slee rightly talks about how agent-based software will help people in the future. It is doing that now, not just the iPhone’s Siri—but when Google tailors our searches to what it thinks we’re looking for. But Tom skips our description of fearsome government and corporate surveillance. It looks like both futures—liberation and control—will be our future.

We are neither technoid optimists nor oy vey pessimists—just evidence-based realists.

With the recent southern Alberta floods, Sid Marty’s review of Wilderness and Waterpower: How Banff National Park became a Hydroelectric Storage Reservoir by C. Armstrong and H.V. Nelles is quite timely. The building of dams for hydroelectric power raises a host of economic and social issues today that should be part of any assessment. In their favour, dams not only provide less polluting electricity, but they can also help control floods downstream. However, the diversion of water can lead to surrounding land no longer being available for use by people, animals or plants.

In Alberta, we cannot reverse history now that parts of Calgary have been built on flood plains. The question is what one should do in 2013. The government promised to cover losses and encourage affected homeowners to move out of flood plains. But this is not the only response that should be considered. Mitigation upstream makes sense if it preserves valuable economic activity downstream. It might even be a better choice.

Cost-benefit analysis provides a sophisticated method by which to assess the degree to which infrastructure should be built to mitigate floods. It is not just the cost of moving people out of plains versus the cost of mitigation upstream. It is also the benefit from land use in comparing different solutions. Land is very valuable in Calgary compared to upstream so mitigation is clearly an option that should be on the policy table.

Building dams or pursuing other forms of mitigation has been done in other parts of Canada and the world. Winnipeg solved much of its flooding problem by building Duff’s ditch to divert the Red River around the city. Flooding by the Yellow River in China led to seven million deaths in the past century and a half until the Three Gorges dam was built, and it has so far stopped the flooding. The dam, however, had its own environmental consequences.

The decision to mitigate is not simple or clear-cut when it comes to flooding. However, it is sometimes the best choice we have.

Re: “Judging the Judges,” by Philip Girard

Philip Girard seems to believe that the process of writing history leaves the door open for historians to write whatever they wish, notwithstanding the evidence. Such is apparently the case with my book, La Bataille de Londres: Dessous, secrets et coulisses du rapatriement constitutionnel, whose purpose, Girard says, is to “delegitimize” the Charter of Rights and Freedoms, the Supreme Court and the 1982 constitutional agreement.

This is not the way things work. When I started my research eight years ago I had no idea of the resistance that Trudeau encountered initially in the United Kingdom because he wanted Westminster to enact a charter. Considering the clash that ensued between London and Ottawa, this aspect of the story seemed, very objectively, the most interesting.

The same goes for the Supreme Court. Until three years ago I had no clue of who Bora Laskin was. I did not set out to demonize him, as Girard seems to believe. It so happened that he played a very dubious role, to say the least, as attested by British documents. This was also something that would have caught the attention of any historian.

Oh, but the Foreign Office archives are no Watergate tapes, says the law professor. In his mind, the absence of a verbatim transcript makes it difficult to really understand what people said and meant. According to his standard, which he did not apply to his biography of Bora Laskin, the writing of history would be almost completely impossible because, 99.9 percent of the time, verbatim transcripts are not available.

Girard also notes that Quebec’s National Assembly unanimously demanded the opening of all archival material related to patriation. This was received with a staunch refusal by the federal government and a yawn by commentators. Girard seems to believe that it is completely normal that the government refuses to disclose documents of such historical importance, almost 32 years after the facts. The one-paragraph report published by the Supreme Court after a two-week enquiry, saying that nothing wrong happened, did not seem to trouble him either.

This is certainly the best way to make sure that no more skeletons come out of the closet. Such an approach is also a good one in order to prevent Canadians from learning the truth about their history. Likewise, it has the advantage of protecting the Supreme Court and the Charter of Rights and Freedoms, thus keeping unscathed the Trudeau legend. In this regard Philip Girard must be very happy with the decision made by the ­conservatives.

Re: “History from the Dark Side,” by Megan J. Davies

I remember my shock, as an academic historian of psychiatry, when I first discovered why Charles K. Clarke, the virtual founder of Canadian psychiatry, was sending young women to the training school at Orillia. In documents I discovered in the archives of the Clarke Institute of Psychiatry, named after him, it was not because these young women suffered intellectual disabilities (mental retardation). It was because they had been sleeping around with different guys. They were not feeble-minded but “immoral,” and for that reason were freighted off to this grim institution that Megan Davies has quite correctly described. And I share the outrage that bristles throughout this review.

Considering how awful things were at Orillia and the many other institutions for children—and adults—with mental retardation in North America, it is not surprising that “mental retardation” has disappeared, and has given risen to “intellectual disabilities” and “autism,” themselves conditions that parents dread but are not quite as soul-­freezing as mental retardation. Will historians 50 years from now look back upon us askance in the way that we regard Charles K. Clarke? Will current Skinnerian behavioural treatments for these conditions be flicked from the table in the same way as we now flick away eugenics?

And there is this: the eugenics movement has been thoroughly trashed by historians because it gave rise to so much evil, such as forced sterilization of “schizophrenics” in Alberta. But, minus the social policy, it really was just an early crack at psychiatric genetics. After the Second World War the academic eugenicists renamed themselves geneticists, because the Nazis had ruined the optics of the earlier term. And psychiatric genetics is a real subject: if you have two parents with schizophrenia, you yourself are at something of a risk. Today, genetic perspectives represent valid knowledge in psychiatry, but we no longer make social policy on the basis of them.

The kids at Orillia were shamefully treated. They deserve their day in court, and it’s fabulous news that they may soon have it!