The phenomenon of child soldiers is not new. Boys and very young men have been encouraged, welcomed, dragooned and press-ganged into armies and navies for a very long time, and mostly we have not thought much about it. Hollywood has brought us decades of Hornblower-type films in which boys serve as plucky midshipmen, while drummer boys serve as a frequent icon for artists seeking to portray bravery in 19th-century combat. I grew up on a diet of child soldiers on television: Rusty, the boy soldier on Rin Tin Tin; Cuffy, the boy soldier on Captain Gallant of the Foreign Legion.

The reality, of course, is very different. Some estimates place the number of child soldiers in active combat today at 250,000. Few of them volunteer, although some, like Omar Khadr, are beguiled into a soldier’s life by an unprincipled parent. Most are kidnapped, however, and are converted without much difficulty, it seems, into beasts of burden, sex slaves and, all too often, vicious fighting machines. Forced to witness and to commit atrocities themselves, often encouraged with beatings, torture and drugs, they are socialized into indiscriminate violence. For unscrupulous warlords with unpopular causes and armies short of recruits, they represent cheap, malleable cannon fodder, easily replaced if they are killed. Senator Roméo Dallaire has called them the most sophisticated low-tech weapons system in the world today.

Some of the worst examples in recent years have been seen in Sierra Leone’s ten-year conflict, graphically depicted in the film Blood Diamond, which arguably portrayed the problem of child soldiers better than it did of diamonds. Charles Taylor’s “Small Boy Unit” in Liberia was a focus of attention at his war crimes trial in The Hague, and The Lord’s Resistance Army led by the Ugandan sociopath, Joseph Kony, remains an object of horror and fascination, raised to momentary and belated global attention last year by the sensational YouTube video, Kony 2012. 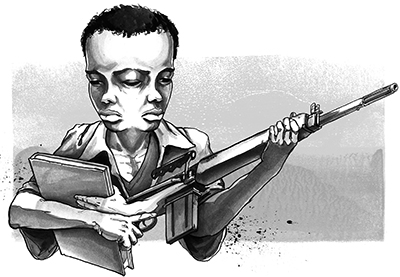 There is a growing library of books about child soldiers—Dallaire’s own They Fight Like Soldiers; They Die Like Children: The Global Quest to Eradicate the Use of Child Soldiers, Uzodinma Iweala’s Beasts of No Nation and Emmanuel Jal’s War Child: A Child Soldier’s Story. Most of them are novels; even Dallaire’s book is a semi-fictionalized attempt to get into the mind of a child combatant. Ishmael Beah, a child soldier himself, produced an emotive memoir of his horrific experience in Sierra Leone; A Long Way Gone: Memoirs of a Boy Soldier became a bestseller, making Beah, the one-time killer, a popular speaker on European and North American lecture circuits.

The challenge for all of these authors is to bring an element of understanding to the subject: How can children be turned into such ruthless killers? Why do so few escape, or even want to escape? And for those that have been “rescued,” can there ever be a return to normality?

Opiyo Oloya, superintendent of education for child learning with the York Catholic District School Board in Ontario, returned to his homeland in Uganda in search of answers. An Acholi himself, he examines Joseph Kony and his LRA, trying to understand why and how an Acholi leader could kidnap Acholi children, using them inter alia against their own people in a vicious and protracted conflict marked by horrific brutality and lengthy, forced marches across hundreds of kilometres and three or four countries.

Child to Soldier: Stories from Joseph Kony’s Lord’s Resistance Army is a cultural investigation because culture, Oloya says, is “at the heart of the transformation of children into soldiers [and] plays a crucial role in their daily struggles to make sense of the violence in which they have become a part, and, ultimately, to attempt to take some control of their lives within it.” The brainwashing of these children is not, Oloya argues, the Stockholm Syndrome writ large. The Stockholm Syndrome has been used to explain why captives—like Patty Hearst, for example—sometimes identify with their captors. Oloya explains that at most, only 8 percent of all abductees fall victim to the Stockholm Syndrome, and these are people held almost exclusively in close confines and over very short periods of time. For child soldiers, the experience is much deeper and much more protracted. Oloya also says that despite a name that invokes God or perhaps Christ, the LRA has none of the “apocalyptic spiritualism” of David Koresh’s Branch Davidians or Jim Jones and his Peoples Temple in Guyana.

Oloya argues that the LRA’s success with children is based on an extensive exploitation of their prior cultural experiences, a kind of “rebranding of the mind, a retooling of previously held cultural ideas” and the creation of a refracted kind of “normal” in which familiar cultural activities—grinding millet, collecting water, eating communally—were the backdrop for the additional obligation that soon enough became apparent: fighting, being wounded and sometimes dying in battle.

Oloya avoids the term “child soldier,” explaining that while the people he describes were kidnapped as children, those who survived soon enough became adults, and their return to their families has inevitably been marred by a kind of fear and loathing on the part of their communities, and even their parents. Not only has the child whom a mother once knew become a killer, but he is no longer a child. Oloya prefers, instead, the term “child-inducted soldier,” a constant reminder that in many cases the challenge of rehabilitation and reintegration is that of an adult who survived—at least in the psychological sense—by retaining elements of a culture that now rejects that person.

This is the double tragedy of the child soldier: abducted and forced into monstrous behaviour, then rejected when she or he is freed at last to resume a “normal” life. What those children want and need most is recognition that while they were away they retained at least some of their Acholi “personhood.” The idea of home is what helped to save them.

But perhaps they were not saved, and perhaps their idea of home was never more than that—a child’s idea. And even if there once was a home as imagined by the child, over the years Kony and his LRA obliterated large parts of it. Payaa Mamit wants to forgive the community that failed her in the first place by allowing her to be kidnapped; she does not want to drown in the guilt and shame of having been part of the force that caused her community so much pain and suffering. She wants to leave behind “her identity as the guilty person she was in the bush, in order to find forgiveness, to forgive, and eventually to live free of guilt.” The chances that any of that will happen seem slim.

This book is about the particular trauma visited upon the Acholi people and their children, told through the personal stories of a few child-inducted soldiers. Because it is by an Acholi searching for answers, the book seems in a way like a telescope that focuses so narrowly on how the Acholi culture accounts for an Acholi child’s survival, that sight has been lost of what the book might say about other conflicts, other countries and other children.

It is not as though Oloya has not read and consulted widely on the subject of child soldiers. The book is well referenced and has an extensive bibliography (although, oddly, Roméo Dallaire’s book on child soldiers is noticeable for its absence). But the fact that many children have survived other conflicts and have returned to face the same problems in their communities in Sierra Leone or Liberia or Mozambique without the benefit of Acholi “personhood” is not considered. Similar cultural patterns may have prevailed elsewhere, but in fact the rebel armies of Liberia and Sierra Leone were notable not for their ethnic homogeneity, but for the precise opposite. While one might ascribe a child’s psychological and physical survival to certain innate and even culturally derived strengths, these would have to be more general in nature than those of the Acholi alone.

Monsters such as Joseph Kony, Charles Taylor and Sierra Leone’s RUF leader, Foday Sankoh, were no more child psychologists than they were social anthropologists. They discovered early in their criminal madness that children were readily available and that they could be brainwashed—probably more easily than adults. Oloya describes eight stages in the liminal transformation of children into soldiers, including some that may have particular Acholi resonance, such as an anointing with shea butter or being made part of a distinct household within the LRA. But it is neko dano—killing a person—that echoes across so many other conflicts where child soldiers have played important roles. Killing is important for three reasons, Oloya explains. First, whether a child is forced to kill or simply to watch, killing is “taught” as part of a multipurpose military strategy. “Second, making abductees watch and participate in killing served as powerful reminders of the fate that could befall those who disobeyed orders or who attempted to escape.” And third, the trivialization of killing served to inure children to the sight of blood and to get them over their fear of death and violence.

Oloya strives to show how the child soldiers were able, with the help of an inner strength derived from Acholi values, to remain human and to divide their personalities into two parts: the person that they had always been and the one that was obliged, in order to survive, to be a soldier. One could perhaps say the same thing of any soldier going into combat. Each once worked in an office or a factory; each once had a family and a normal peaceful life; and each is obliged to shoot and kill when the command is given. All live in hopes of coming home to normal, even those who committed the atrocities at My Lai, Abu Ghraib and Belet Huen. And while the welcome will be different from one instance to another, the personality bifurcation may be similar. The difference between the adult soldier and a child soldier in Africa may not be as great as it seems.

Child to Soldier sheds new light on this dark subject. It is restrained, even clinical in tone, avoiding recrimination, blame or even advice for those who work with former child soldiers. Some of the latter might have been useful, but just as each former combatant is an individual, perhaps there are no pat lessons. Oloya laments the failure by Uganda and others to acknowledge the suffering of the people of Northern Uganda, and especially the pain of the child-inducted soldiers. There is nothing to memorialize all the children who lost their innocence and their lives, apart from a monument erected in 2009 by the Dutch government at the main intersection in the town of Gulu. “Called the Pillar of Peace, it depicts two children, with dismantled guns at their feet, reading a book. This is, as the Acholi like to say, loyo nono (better than nothing).”

Ian Smillie is the author of  The Alms Bazaar and a co-author of  The Charity of Nations: Humanitarian Action in a Calculating World.