Toronto is full of landlubbers, people who rarely if ever give Lake Ontario a thought, let alone think of this place as a waterside town. I am one of them, I admit. When I do go down to the lake, I am always a little surprised to see that elemental expanse of water in front of me, and surprised too at how different Toronto feels by the shore.

Not so for Jane Fairburn, for whom the waterfront is home. She grew up in southeast Scarborough, and now lives in the Beach. Along the Shore: Rediscovering Toronto’s Waterfront Heritage is Fairburn’s ten-year literary labour of love, in which she explores life along the Toronto shoreline, from the Rouge River in the east to Etobicoke Creek in the west, in nature, in geology, in patterns of settlement, in reminiscence, in historical anecdotes and local personalities both famous and not-so-famous. She paints a picture of the eras that have come and gone, the summer resorts and cottage communities (whose descriptions make me, for one, wistful), the loss and destruction of the shoreline’s natural features and ways of life and, sometimes, of their heartening renewal. The result is a marvellous book that generously evokes the nature of the four shore communities she chronicles: the Scarborough Shore, the Beach, the Island and the Etobicoke Lakeshore. The idea is that knowing something of the history of a place unlocks its spirit, and gives it meaning. It gives us, in Fairburn’s lovely phrase, “a glimpse of the past imagined.” 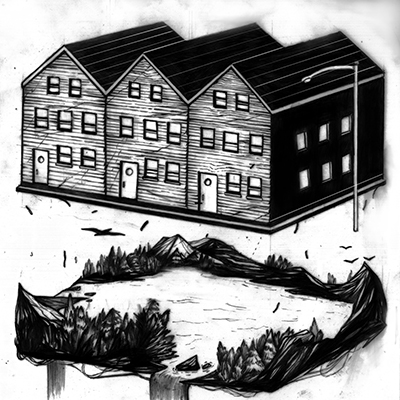 Picture yourself today on Queen Street East, looking south into Kew Gardens. You see before you an expanse of grass, shaded by mature trees. The park is full of children, the street behind you full of traffic. Through the trees there is a view of the boardwalk, and beyond that, the blue-grey waters of Lake Ontario.

It is 12,500 years ago, and you are underwater. Lake Iroquois, a huge body of water formed of meltwaters from the receding glacial ice sheet, extends up the steep hill behind you to its ancient shoreline, where Kingston Road now wends. Watch, as the waters of Lake Iroquois in turn recede, and streams and rivers—the Don and the Humber to the west, the Rouge to the east—cut valleys down to the shore and form deltas at their mouths. See lake levels rise again, eroding the Scarborough Bluffs to the east of you, the currents carrying sand and silt past you and far to the west to form a sandbar peninsula that becomes, in time, the Island.

Now look to the west, and, sheltered by a long finger of sand, you see a great freshwater marsh teaming with life: blue irises and bulrushes, salmon, muskrat and the marsh hen. Millennia pass, and you can just discern, fronting the marsh, where present-day Coxwell Avenue meets Queen Street, the longhouse of a small group of aboriginal people, come to hunt and fish. Now blink, and it is 1794, and Sarah Ashbridge, a widow of 60, and her children and their families arrive from Pennsylvania to settle that site and give their name to the bay.

Two years earlier, looking south to the beach, you would have seen Elizabeth Simcoe, adventurous wife of Lieutenant-Governor John Graves Simcoe, just arrived from England, riding on horseback along the peninsula, crossing easterly along the sands where the boardwalk now lies, dismounting and clambering into a boat to be rowed further to the east, to admire the huge white cliffs of the highlands we call the Scarborough Bluffs. Four years later, see her ride the rough trail from York to pay widow Ashbridge a visit.

Turn now, and look north, and three decades pass. The stagecoach from York to Kingston is rattling and bumping along Kingston Road. It passes the small village of Norway at Woodbine: a sawmill, a store, a hotel and a brewery, and no church yet. Turn back to the lake, and out on the water you see a two-masted schooner sailing past, loaded with farm produce destined for the wharves of Toronto. Sailing in the same direction is a stonehooker, a shallow-draft, flat-bottomed schooner carrying shale, stone and gravel taken from the shoreline and near-shore, material to build the foundations of the young and growing city.

Suddenly, it is 1860. A local fisherman has built a cottage on Woodbine Beach to the east of you, the first cottage on the beach. Kew Gardens is still wild and untouched, 21 acres of fallen trees, old growth, sand and marsh. Its new owners, Joseph Williams, former sergeant in the Second Battalion of the Toronto Rifle Brigade, and his wife, Jane, tramp over it. Just to the north is their thriving market garden business, Kew Farms. There are only twelve houses in the district. The early Queen Street you are standing on is a mere country track, swampy and next to impassable in places, with stumps of trees in its path. The neighbours to the west share their home with their pigs.

We could go on happily travelling through time while standing in place, to see the Williams family loading the cordwood logged from their property onto a skiff and floating it to their schooner, the Brig Rover, just offshore, set to sail for the lumber markets of Toronto. We could watch as Kew Gardens—“The Kew”—opens in 1879 as a pleasure ground for summer visitors with tents and cabins for rent by the lake, a fixture of the resort era that defines the Beach in the last two decades of the 19th century and the first two decades of the 20th. We could watch as a steamer brings throngs of visitors to the dock of the Victoria Park Amusement and Pleasure Garden, as away to the west the Toronto Street Railway Company’s horse-drawn trams bring city-dwellers to Woodbine Racetrack, to see Buffalo Bill’s Wild West show.

There is affection in Fairburn’s description of the Beach of that time, cluttered with summer cottages, a close community on the water during the long summer evenings, folding tents and shuttering when Labour Day comes. And there is poignancy in her telling of the end of that era, when the crowds are gone and the resorts are closed, the summer community gives way to permanent homes and winterized clapboard cottages, and the beach is cleared of the summer cottages—211 of them—to make way for a continuous waterfront park. Looking with Fairburn’s eyes, you can just see through the trees a displaced beach cottage, lifted entirely from its foundation, floating over the water to Hanlan’s Point.

The Beach has become gentrified in recent decades, although the fierce protectiveness of long-time Beach residents ensures that something of the village remains. This is the Beach of the present, but it is a present that is enriched by the past. As Fairburn says, “at its most fundamental level, [the Beach] reminds us of a time in Toronto that is all but forgotten. This is at least partly why the area resonates with so many of us and makes it so lovable.” And isn’t that the point? Finding resonances, knowing the reason things are as they are, how they used to be different, and how they could be imagined to be different in days to come: that sense of place is the gift of a long and rich memory, and that is the gift Jane Fairburn gives us in Along the Shore.

With more than 250 images, ranging from ancient maps, documents and period photographs, to recent photographs by Fairburn herself, the book is lovely to look at: the images make a lush and evocative complement to the text. Fairburn’s sources of information vary widely. She has a good bibliography at the back, listing such old Toronto classics as the Diary of Mrs. Simcoe and Henry Scadding’s Toronto of Old (which, in its anecdotal quality, its tales of local personalities and its personal reminiscences, Fairburn’s book echoes). She draws upon many excellent secondary sources. She has done a lot of living in the Beach, and tramping along the shoreline, and talking to older residents of these shore communities, such as artist Doris McCarthy, who lived for decades near the Scarborough Bluffs. Fairburn gives equal time to the heritage of the Island and of the Scarborough and Etobicoke lakeshores, although I have only drawn on her Beach chapters here. The shore she does not profile is that of the old City of Toronto, perhaps because the natural shore there is long gone; perhaps because that history would make for volumes in itself.

This is a book for landlubbers, and for those who are already wise to the pleasures of the water, wending their way down through the city to the beach, to put their boats in for a sail on a summer evening. Perhaps especially it is a book for those fortunates who make their homes in the communities along the shore of our Toronto-on-the-lake.

Grace Westcott is a practising copyright lawyer and past executive director of PEN Canada.