As recently as the third quarter of the 20th century, just a few substantial books existed about the history of blacks in Canada. Two scholarly works—The Blacks in Canada: A History by Yale University’s Robin Winks and The Black Loyalists: The Search for the Promised Land in Nova Scotia and Sierra Leone, 1783–1870 by James W. St. G. Walker—could not be overlooked. My own father, Daniel G. Hill, raised eyebrows with his ground-breaking PhD thesis accepted in 1960 by the University of Toronto, which was called “The Negroes of Toronto: A Sociological Study of a Minority Group.”

My father and mother (Donna Hill), who each went on to write their own books about black history in Canada and to co-found the Ontario Black History Society, had an odd, slim, well-worn French volume on their shelves dating back to my earliest childhood. My father’s French was abominable so I wondered why this book was so central in his personal library. He let me know that Marcel Trudel’s Deux siècles d’esclavage au Canada français was a detailed, vital, scholarly work about a piece of Canadian—and African-Canadian—history that few Canadians knew a thing about: the history of blacks and of slavery in New France.

I learned, at the kitchen table, a number of fascinating stories. For one, the first documented slave in Canada dated back to 1628, when a young boy from Madagascar was passed from British hands and came to be owned by a French trader in Quebec City. I learned of Marie-Josèphe Angélique, the Montreal slave who was convicted of burning down her mistress’s home in Montreal in 1734 in a fire that destroyed much of the small city. She was tortured brutally (the bones in her legs were smashed) until she confessed, and then she was hanged. And I learned that many of the most powerful men in Quebec society were slave owners in the 18th century. This included Governor James Murray, who in 1763 wrote the following request to a slave trader in New York: “Black slaves are certainly the only people to be depended upon … pray therefore if possible procure for me two Stout Young Fellows … [and] buy for each a clean young wife, who can wash and do the female offices about a farm. I shall begrudge no price.” 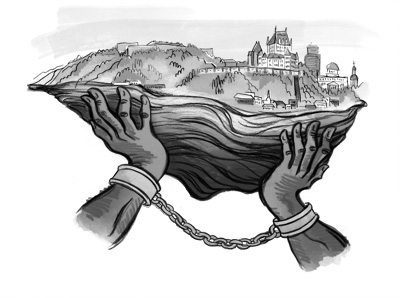 As it turns out, much of the writing about black history and slavery in Quebec, including my father’s popular history, The Freedom Seekers: Blacks in Early Canada, perched on the shoulders of Marcel Trudel. The Québécois historian documented the enslavement of both First Nations and African peoples in Quebec long before it was popular to do so. Indeed, Trudel’s Deux siècles d’esclavage au Canada français—first published in 1960—so rankled his peers that he was forced to leave Quebec and take a position teaching at the University of Ottawa.

The Quebec historian’s influence is not limited to English-Canadian works published decades ago. For example, in the last decade, two key publications about the life of Marie-Josephe Angélique owe a debt to Trudel. In 2004, the Québécoise archivist and historian Denyse Beaugrand-Champagne published Le procès de Marie-Josèphe Angélique, which took the position that Angélique was innocent of the crime of arson to which she was forced to confess, under torture. Two years later, historian and poet Afua Cooper’s book The Hanging of Angélique: The Untold Story of Canadian Slavery and the Burning of Old Montreal appeared; it argued that Angélique was a rebel heroine, guilty of the crime. Regardless of whether the young woman was guilty or innocent of arson, the important facts are that Angélique was enslaved in Montreal, that she was made to confess under torture and that she was executed in conformity with the laws of New France.

Finally now, more than half a century after Trudel’s ground-breaking work was first brought out in French, it has been capably translated by George Tombs and published by Véhicule Press in Montreal. In its title, the new English work employs “Canada” instead of a literal translation of “Canada français.” Tombs explains that Trudel means “French Canada” when he uses the term ­“Canada.” To be clear, apart from one or two brief references to slavery in Upper Canada, this translation focuses exclusively on the history of slavery in New France.

It must be said that the writing in this book is highly repetitive. And the terminology is archaic: terms such as mulatto, savage and Eskimo abound. Black slaves are occasionally referred to as “ebony wood,” “ebony” or “ebony slaves.” I chafed at Trudel’s occasional, defensive efforts to characterize Canadian slavery as somehow having had “more of a humane nature” than its counterparts in the United States and the Caribbean. And I was enraged by some bits that were offensive in their euphemistic quality, such as this reference to sex between masters and subjects: “we identified four slave owners who yielded to the charms of their slaves.” Yielded to the charms of? How about raped?

However, it is important to recognize that Trudel was working with the language and thinking of his time. It is vital to push past his words and ideas, and to appreciate the depth and the courage of his work in meticulously documenting the nature and extent of slavery in New France.

Trudel offers a clear picture of the early, middle and end game of slavery in French Canada. The book commences with Canada’s first known slave, Oliver Le Jeune, who was brought to New France in 1629 by the British privateer David Kirke and was sold for 50 écus (the equivalent of six months’ wages for a skilled person) to a French trader named Le Bailiff. Le Jeune was sent to school, baptized and given the last name of his spiritual father, a Jesuit priest named Le Jeune. The slave died, probably while still in his thirties, in 1654. Moving forward, Trudel traces the enslavement of First Nations people and blacks. From 1671, Trudel notes, French settlers in Canada began to acquire Amerindian slaves. The trafficking of First Nations slaves began in earnest in 1687 and continued until the early 19th century.

The massive plantations that enslaved millions of African people in the United States and the Caribbean did not exist, for reasons of our northern climate, in Canada. Here, Trudel explains, slaves were primarily put to work in businesses, factories, religious institutions and homes. The infamous French law known as the Code noir (there were two, dated 1685 and 1724) likened slaves to personal property and made various stipulations about slavery. For example, slaves who escaped for the first time were to have their ears cut off, and third-time offenders were to be executed. Trudel says that the Code noir influenced the practice of slavery in New France, even though the law was not entrenched or formally adopted for use on this continent.

After the British defeated the French in 1760, slaves remained in bondage under the new political system. The institution of slavery continued in Lower Canada (as it did in Upper Canada) throughout the 18th century. Slavery dwindled in the early 19th century in both Lower and Upper Canada and had almost entirely disappeared in both jurisdictions by the time the British abolished it in most of their empire (Canada included) in 1834.

The translation of Trudel’s book is clear, detailed and engaged. Tombs has written an informative preface to the English language edition, contextualizing not only the book but the life and thoughts of Trudel (who died in 2011, at the age of 93).

Tombs writes: “I remember asking Trudel why [his] pioneering work had only just begun to spawn new studies and fiction about slavery in Canada. He shook his head wistfully, replying that this subject had long been a blind spot in the French Canadian psyche.” Having established that slavery existed for two centuries in Quebec, Trudel takes aim at French Canadians for refusing to face up to this history. “In Quebec,” he writes, “people were reluctant to use the term slavery although the reality was there for all to see.”

It should be noted that the same reluctance has hobbled the English Canadian psyche. In my own discussions with high school students and with adults from Dawson City to St. John’s, it is common to find a person—aged 15, or 55—who can speak with ease about slavery, segregation and civil rights movement in the United States but knows virtually nothing of their counterparts in Canada. We know all about the Civil War and Abraham Lincoln, but few Canadians call tell you that when Lieutenant-Governor John Graves Simcoe attempted in 1793 to abolish slavery in Upper Canada, he was stymied by slave-owning legislators who forced him to accept a compromise that did not do away with slavery, but prohibited people from importing any new slaves into the jurisdiction.

Trudel must be credited with addressing this ignorance, and taking pleasure in challenging his readers with uncomfortable, provocative facts. In Canada’s Forgotten Slaves, for example, Trudel based his observations and analyses on a close examination of records of 4,200 slaves in Quebec from the mid 1600s until the abolition of slavery in Canada (and in most of the British empire) in 1834. Among the slaves Trudel studied, about 2,700 were First Nations people (he called them “Panis”), 1,450 were blacks and the remainder who were of indeterminate racial origin.

Trudel went far beyond counting the number of slaves. He took pleasure in examining Canadians as slave owners. Who owned slaves in Quebec? Well, pretty well everybody who had the means. Famous explorers such as Laverendrye held First Nations slaves. Governor James Murray owned black slaves. At one point, 23 members of the executive and legislative councils of Lower Canada were slave owners, as were eight judges and 17 members of the House of Assembly. Merchants, military officers, surgeons, carpenters, blacksmiths, bishops and nuns all owned slaves. The Hôpital Général de Montréal owned slaves, as did its leader, Mother d’Youville.

No wonder Trudel was chased from his province and forced to resettle in Ontario. He linked dozens of prominent French-Canadian family names (such as Beauchamps, Beauchemin, Raymond, Sabourin, Villeneuve, Lachasse, Demers and even his own family, Trudel) to slave ownership and went on to tease his compatriots with the reminder that many of them—including former premier Maurice Duplessis—probably descended from slaves too. Trudel delighted in asking questions that must have seemed provocative in the extreme, when his book was first published in 1960. He asks “Did Quebec men father these [slave] children?” and then proceeds to name the children and the fathers. He asks “Do Canadians have slave blood?” and goes on to cite two contradictory edicts from the French rulers about interracial relations—one supporting and another opposing sexual relationships between French and First Nations peoples.

It is impossible to read Marcel Trudel—in his original, or in this important new translation by George Tombs—and not be struck by two things: that slavery was fully anchored in Canadian society from the earliest era in New France, and that Canadians have been denying it ever since.

Let’s bring on more new research, and more historical fiction, and more vital, engaged translations such as Canada’s Forgotten Slaves. We need all such books in Canada, so that we can know ourselves and our history more profoundly.

Lawrence Hill is the author of nine books, including The Book of Negroes (HarperCollins, 2007) and Blood: The Stuff of Life (House of Anansi, 2013), which formed the basis of his 2013 Massey Lectures. More information about him is available at <lawrencehill.com>.