Groundswell: The Case for Fracking

In 1945, Canadian homes were still heated either by coal or by wood. My grandparents had shivered through depression-era Ottawa winters, desperate for fuel. Now the war was over, and fortunes were to be made, but to avoid flooding the housing and labour markets, the Canadian military did not demob everyone at once. This left my grandfather kicking around at a sniper training facility in Fort Benning, Georgia, with time on his hands to think about the future.

He twigged to a newfangled idea going around: oil furnaces. Alberta’s big Leduc discovery had yet to happen, and the epicentre of Canadian oil was still in Southern Ontario. He bought the rights to sell some small gadget to do with oil burners, and to hear my grandmother tell it, she had to smuggle a prototype into Canada in the folds of an evening dress (many of her stories involved evening dresses). As oil grew, so did my grandfather’s heating equipment business, expanding into 16 wholesale branches throughout Ontario, Quebec and the Maritimes before his death.

On Fracking, by C. Alexia Lane, follows this growth to the Alberta tar sands and unconventional oil and gas extraction, in a potted history of North American hydrocarbons. In hydraulic fracturing, the latest industry revolution, millions of litres of water—usually fresh—are mixed with chemical additives and “proppant,” sand or ceramic beads. This mixture is then injected at high pressure through a well, where its force creates cracks in the rock and flushes out oil or gas that was lurking in the fissures. The proppant remains to hold open these cracks. Horizontal drilling, which extends the reach of these wells for kilometres around, has been combined with fracking to create the once-unlikely scenario of the United States as a net natural gas exporter. 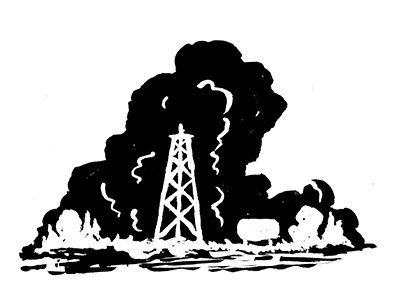 Lane is a water management specialist, and her book—marketed by Rocky Mountain Books in their series of “manifestos”—lays out the multi-pronged threat fracking poses to the quality and quantity of our most essential commodity. Freshwater is used intensely in the fracking process and, although the oil and gas resources are to be found deep below our groundwater reserves, the wells often pass through drinking water aquifers on their way to the riches. The connection is not accidental—these subsurface deposits of fossil fuels and aquifers formed in tandem with each other. Both are the legacy of thousands of years and both are finite. The difference is, water has no substitute.

Peak oil, and the scarcity that was to follow it, made alternative energy development an urgent concern on two fronts: environmental and economic. We were running out of the very thing that was killing the planet. If the metaphor of addiction holds true for our society’s perpetual craving for fossil fuels, we were staring at a stretch of cold–turkey detox, but it was ultimately for our own good.

For once, money seemed to be speaking the same language as our long-term survival odds. Then the unexpected happened—industry foresight led to a seamless transition into an oil alternative, leading to plentiful energy. To the disappointment of environmentalists, that alternative was also a hydrocarbon. Fracking has let us off the hook just when we need to be hurrying.

As conventional oil dwindled, the full-blown unconventional gas extraction—coal-bed methane and shale gas fracking—took over, keeping energy prices low. It is a pity, because with each energy price fluctuation we have seen throughout history, demand has followed suit. Price crashes lead to inefficient and excessive use while price rises lead to conservation. And while we are at it, Lane suggests our water prices should be higher too. At the moment, they are hardly noticeable, and we have no motivation to conserve.

Lane’s book largely eschews the global climate change conundrum in favour of a practical, locally applicable approach. She advocates for a temporary hiatus on fracking until we can develop less water-intensive techniques and finish baseline studies of groundwater resources before we irrevocably scramble the subsurface structures we rely on. It is currently impossible to remediate contaminated groundwater.

Ezra Levant’s Groundswell: The Case for Fracking makes not so much “the case for fracking,” as it promises, but rather presents the case against the anti-fracking movement—a sort of rebuttal against a reaction. This book “looks at the enemies of fracking: who they are, what they’re saying, and why they’re fighting the future so desperately,” concludes his introductory note.

Levant is witty, and the book is well written. Although his topic is nominally the same as Lane’s, he has little patience with the science—of which more later—and he really comes to life in the political arena. To Levant, the shale gas revolution represents political freedom. OPEC is bad enough, holding 40 percent of the world’s oil reserves, but the natural gas equivalent—the Gas Exporting Countries Forum—represents 70 percent of the world’s natural gas reserves, enough to collude very effectively on manipulating global energy prices. That is, until we all have our own personal fracking operation in our backyards. Power to the people.

Whereas oil is priced globally, natural gas prices fluctuate wildly, often depending on physical proximity to the source. European countries subjected to Russia’s natural gas protection racket, for example, have no recourse. Levant gives ample evidence of the shady business practices of Russia’s energy monopoly, Gazprom. Without energy independence from a foreign country, there can be no real political independence, he argues. Fracking, both locally and in the form of liquid natural gas imports from the United States, would offer a real alternative and some welcome competition. Massive investment is pouring into the infrastructure required for this oil-style commodity trading of low-temperature, high-pressure liquefied natural gas.

While Lane is fluent in Canadian government speak—she calls for things like “proactive frameworks,” “comprehensive monitoring programs” and stewardship strategies—to Levant, good governance is an oxymoron. He uses terms like “Qatari sharia gas” and “messiah fuel.” All environmentalists are extremists, and solar or wind power are about as likely to pan out into viable energy alternatives as cold fusion is.

Epitomizing a growing breed of Canadians, Levant comes from the school of thought where America (a word hitherto rarely used in this country) is the ultimate Good Guy and free market capitalism will redeem us all if only we will let it do its work. He is also a provocateur, a Sun Media personality and the author of several previous books including one called Ethical Oil: The Case for Canada’s Oilsands.

Given that we have yet to deal with the demand side of our energy market, we can hardly object to the on-the-ground realities of hydrocarbon extraction in North America. If we do, we are just indulging in NIMBYism, says Levant, and pushing the activity into the hands—and pockets—of dictatorships. If Russia regularly spills oil on a scale surpassing Deepwater Horizon and Qatar holds foreign workers hostage in indentured servitude, then we should be grateful for our BPs and Shells that, at the very least, are meant to be accountable to our own governments.

As for using too much water, millions of litres per well might sound like a lot, but Levant argues it is not all that much in the scheme of things, when compared with other water-intensive activity like the crop irrigation that goes into an equivalent value of ethanol production.

When Levant writes “the science, the actual evidence, proves that all those fracking-contamination claims are mistaken,” he is on very shaky footing with a scientifically literate reader, because he has already demonstrated that he is not equipped to evaluate evidence. You see, Levant is a firm denier of anthropogenic climate change. He is incredulous that carbon dioxide, a colourless, odourless, harmless gas, the gas, moreover, “that we exhale -countless times a day and that nourishes plant life on this planet,” could require regulation. But for the worriers among us, he gamely reassures us that natural gas is the cleanest-burning of the hydrocarbons, and that the United States has reduced its carbon dioxide emissions because of the fracking boom.

In the same way that my grandfather, the oil burner supplier, was known to play up the dangers of gas stoves, Levant portrays the anti-fracking movement variously as Russian propaganda and Qatari media meddling, even going so far as to suggest that Al Jazeera’s English-language freelance rates fund a “battalion of anti-fracking journalists” by giving them piecemeal reporting work. They turn around and use their Qatari income to make trouble, closer to home, on channels we all watch.

For phenomena that defy his intuition, Levant sets the bar for the burden of proof impossibly high. In the same way the tobacco industry clung for decades to its claim that not a single case of cancer had been linked to smoking, Levant raises suspicions by his very insistence that no proven cases exist of groundwater contamination in fracking. Never mind that major court cases have been awarded to plaintiffs in fracking-caused groundwater contamination. Levant has defined them out of existence. Why unconventional oil and gas extraction needed its hard-fought exemption from the Clean Water Act, if clean water had nothing to do with fracking, is not explained.

Neither book addresses what seems to be a driver of our energy policies over the years: human nature. The Northwest Territories, where I live, has an aboriginal culture–based Water Act, which Lane praises for its forward-thinking and principled stance toward preserving clean water for future generations. A defining moment in our history was the Berger Inquiry, in which every community in the NWT stood up against the Mackenzie Valley Pipeline. But even here, it was announced this past summer that fracking would be allowed in the territory despite a report that cautioned against it. Wherever money is in the ground, humans will have a hard time resisting. The temptation will always be to dig.

Jessa Gamble is the author of The Siesta and the Midnight Sun: How Our Bodies Experience Time (Penguin, 2011). She lives in Yellowknife.

Jessa Gamble’s review of two books on hydraulic fracturing leaves the reader with some odd impressions of our energy circumstances.

What energy crisis? We have many energy challenges—from market access, to worries about consumer costs, to greenhouse gas emissions. But we don’t have a crisis. The system delivers clean, reliable and affordable energy to most (not all) Canadians. We benefit economically from our energy resources. And it seems that the world is not running out of oil or any other energy source.

In contrast to the implication in the review, gas is not a new thing—natural gas has been in widespread use in Canada for 50 years and it provides something...