The Paris Game: Charles de Gaulle, the Liberation of Paris and the Gamble that Won France

It is normal in the English-speaking world to describe General Charles de Gaulle in negative terms. Arrogant, vain, ungrateful and dictatorial are some of the epithets used to describe the obscure French Army officer who in 1940 refused to accept defeat and, after helping the Allies crush Germany, went on to become president of France and founder of the Fifth Republic.

Ray Argyle has written Canadian historical novels and biographies, including one on Joey Smallwood. Argyle is also a francophile fascinated by the most celebrated Frenchman of the 20th century. He knows de Gaulle was not easy to get along with. But, he writes in The Paris Game: Charles de Gaulle, the Liberation of Paris and the Gamble that Won France, excessive focus on de Gaulle’s personality has obscured our view of the person. We remember his vanity and arrogance and forget “his significance as a transformative figure of the twentieth century.”

One of Argyle’s themes is the occupation of Paris and its liberation. Argyle compares the manoeuvring over the fate of Paris to the “great game” between Britain and Russia for influence in Central Asia in the 19th century, hence the book’s title. (The term “great game” was popularized by Rudyard Kipling in his novel Kim.) But the title is misleading because the book’s focus is wider than Paris. It is the story of France’s role in World War Two told from de Gaulle’s point of view. It tells how de Gaulle, with breathtaking self-assurance, declared France undefeated although the whole world knew otherwise, and declared himself its leader although he had never held elected office and was unknown to most of the French. The story continues after the war with accounts of de Gaulle’s adventures in French politics, Algeria and Quebec. 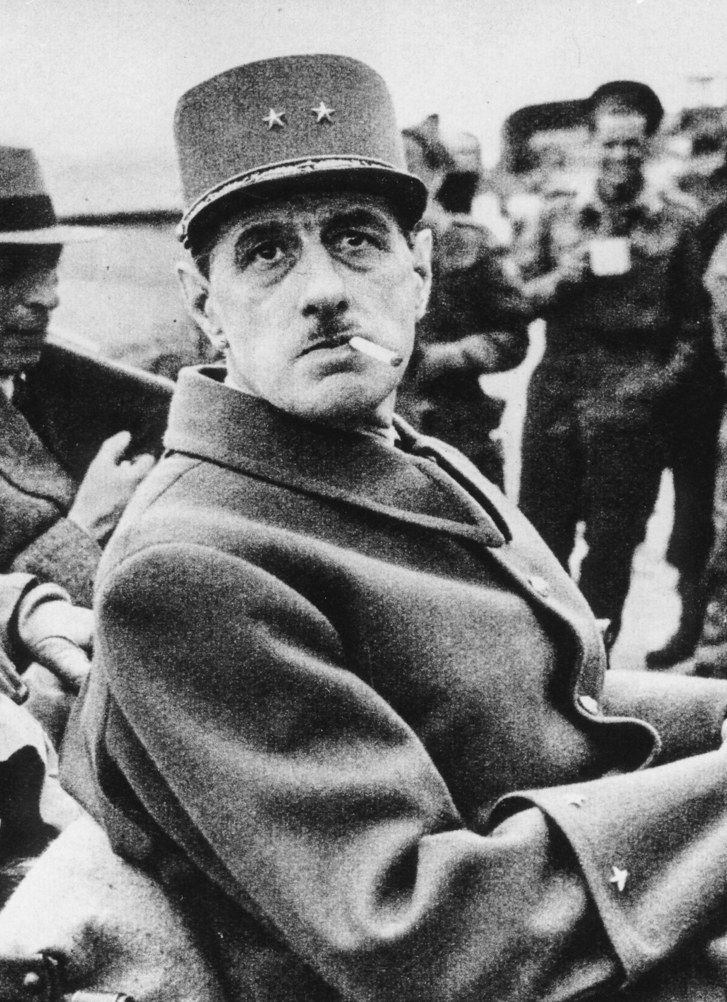 Image by The New Yorker

Argyle demonstrates that de Gaulle’s character flaws were also strengths. Yes, he was outrageously stubborn and insistent on getting his own way but these traits were necessary to carry out his mission—saving the “honour” of France. His eloquent speeches, broadcast on the BBC to the French people from exile in London, boosted their morale. By the end of 1940, some 35,000 French soldiers and sailors had joined the Free French forces operating outside France under his direction. De Gaulle also styled himself the leader of the resistance inside occupied France, although not always with the agreement of the resistance fighters themselves. His refusal to surrender earned him a death sentence from the collaborationist Vichy government led by his former friend, Marhsall Pétain.

De Gaulle’s most important relationship was with Churchill, a lifelong francophile.

Argyle’s story begins before the war when, like Churchill, de Gaulle was urging rearmament. In 1934, he wrote a book advocating the mechanization of the French army. The book caught the attention of Adolf Hitler, who had a translator read it to him. The German army implemented de Gaulle’s recommendations while the French military ignored them.

Argyle has plumbed the archives of four countries and delved into the vast World War Two literature to create a heroic portrait of de Gaulle. But he does not neglect others, such as the resistance leader Jean Moulin and the Free French general Philippe Leclerc, who never gave up the fight. De Gaulle’s most difficult relationship was with Franklin Roosevelt who was contemptuous of France’s poor military performance, going so far as to say the country no longer existed. Roosevelt had an absurd plan, fiercely resisted by de Gaulle, to set up an American military government in Paris after the war to teach the French how to govern themselves properly.

De Gaulle’s most important relationship was with Churchill, a lifelong francophile. The uneven power relationship was difficult for de Gaulle who, for domestic political reasons, could not appear subservient to the British. As a result, the two quarrelled often. When an aide suggested to Churchill that de Gaulle, despite all the problems he caused, was a great man, Churchill erupted, “A great man? Why, he’s selfish, he’s arrogant, he thinks he’s the centre of the universe … You’re right, he’s a great man!”

In 1941, a Free French naval force took the French islands of St. Pierre and Miquelon away from Vichy. De Gaulle later claimed that he ordered the takeover, which happened without a shot being fired, because he thought Canada was going to seize the islands’ radio station. The islanders were delighted but public opinion was different in Quebec. According to Argyle, Quebecers “viewed modern France as corrupt and immoral.” They supported Pétain because de Gaulle was considered “a dangerous republican and possibly a Communist.” Mackenzie King, however, became an admirer of de Gaulle and, in November 1942, Canada switched its support from Vichy to the Free French.

A Canadian book about Charles de Gaulle must of course make reference to his notorious visit to Quebec for the opening of Expo 67. At the age of 77, de Gaulle had not lost his capacity to infuriate. Who else would have the gall to interfere in the internal affairs of another country—a country, moreover, that had shed blood in France’s defence in two wars? And who else, representing a country that had to contend with its own separatist movements, would take sides on behalf of a separatist movement in another?

“I will hit hard … Hell will happen but it has to be done.”

De Gaulle found a way to link his visit to the world war that had ended 22 years earlier. Speaking to a crowd outside Montreal City Hall, he said: “This evening, here, and all along my route, I found the same kind of atmosphere as that of the liberation.”

The reaction to his “Vive le Québec libre” shout, both in Canada and France, was brutal. One of his own cabinet ministers said, “He’s crazy.” Another added, “This time he’s gone too far.” Some thought that de Gaulle had been spontaneously carried away by his own rhetoric. Argyle reminds us that this was not the case. De Gaulle believed in Quebec independence. Before departing from France, he told his son-in-law, Alain de Boissieu, “I will hit hard … Hell will happen but it has to be done.” In retrospect, de Gaulle’s speech did little to advance the separatist cause, proving that there are limits to what even a great man can do. When he was president during the 1960s, his straitlaced wife, Yvonne, asked him to ban miniskirts but he had to explain to her that even he was not all-powerful.

Argyle concludes that de Gaulle was right on the biggest issues—continuing the fight against Nazi Germany, decolonizing overseas territories and creating the Fifth Republic that brought stability to French governance. De Gaulle was also right during the war when he predicted that Hitler would attack Russia and he was right when he warned President John F. Kennedy not to get the United States entangled in Vietnam.

That de Gaulle survived to die of natural causes in 1970 is remarkable given the 18 attempts on his life by right-wing military elements opposed to Algerian independence. In 1962, he and Yvonne were in the back seat of their car when they were the targets of an assassination plot organized by the Secret Army Organization, a group of dissident officers. A dozen men armed with automatic rifles fired 200 bullets at them. Only 14 bullets entered the vehicle and none of them touched the occupants. “These people shoot like pigs,” de Gaulle observed.

It is tempting to say that Ray Argyle’s well-researched, fascinating book reads like a novel, but that would be wrong. No novelist could invent such a protagonist.

Daniel Stoffman, author or co-author of eleven books, studied international relations at the London School of Economics and has lived in France.