Can a single building make a city? Perhaps for Toronto it is true. Christopher Armstrong, in Civic Symbol: Creating Toronto’s New City Hall 1952–1966, provides the evidence that the creation of New City Hall was the moment modern Toronto was born. He tells a fascinating story of how the Toronto of the 1950s—a reliably dull provincial city of no importance lost in the middle of a secondary country—transformed itself into a global metropolis, a city that even those who might cringe at the phrase “world class” must acknowledge is now lodged in the top dozen most important cities in the world. His book makes a strong case that 50 years ago the extended civic drama that culminated in Viljo Revell’s masterpiece was Toronto’s pivotal moment. How did it happen?

A few writers and fewer academics have tried to chart that rise. Robert Fulford comes closest, with a great book, Accidental City: The Transformation of Toronto, based on the thesis that the city’s rise to prominence was not through any grand plan but rather as a consequence of benign neglect and actions off-stage. It is a convincing idea. A large measure of the city’s success is a consequence of omission rather than commission. Toronto did not make the mistakes of American cities: it did not build many urban expressways; it did not destroy many inner city neighbourhoods through urban renewal; it did not build vast swathes of public housing. It did not do all these things often not for lack of intent but largely because its diffuse governance process just could not get around to it.

In the late 1960s and early ’70s that civic sloth combined with geopolitical luck. The city offered a safe haven both from sovereigntist fervour in Quebec and from racial and anti–Vietnam War ferment in the United States. And the 1967 changes to the Immigration Act transformed the complexion of the city. Those external shots of energy and the magic of immigration changed Toronto forever, and New City Hall was there to welcome them. 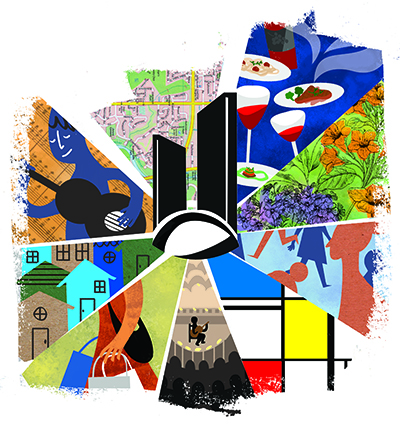 In the preceding decade, for once we had made our own luck. An extended, often fraught and uncertain process resulted in a building that gave Toronto a whole new idea about itself. And it was Torontonians themselves, led by a few notable citizens and politicians described in generous detail by Armstrong, who made it happen.

It could have come unstuck so many ways. Deciding whether to go ahead with the project, whether to have a design competition, whether that competition should be open to the world or restricted to Ontario or Canada as the architects’ associations lobbied, securing the budget, getting council to agree on the details again and again and again, wrestling the complicated project to completion—all these were acts in a decade-long civic drama. And like any good drama it had its cast of good guys and bad guys, heroes and villains. And, wonderfully, well past Act Five, the good guys won.

The good guys? Eric Arthur, the worldly, politically savvy University of Toronto architecture professor who managed the competition and brought in a top rank international jury. Eero Saarinen, the renowned architect who, temporarily absent from the jury room, returned to insist on the eventually winning design making the short list (something he had done the previous year as juror in the design competition for the Sydney Opera House, with a result the world well recognizes). Fine civil servants made the building actually happen— George Bell, Ray Bremner, Matt Lawson—it is good to see them get the praise they deserve. And the undoubted heroes: mayors Phillips and Givens, both Jewish, who broke the stranglehold of the Orange Lodge and let fly the city’s better angels, both of them leading from the front and ultimately paying politically for their boldness. And, of course, the winning Finnish architect Viljo Revell, the “huge, shy, kindly shambling man” who gave us his unique creation, suffering financially and physically in the effort, dying a month after his last visit to see his building topped out.

A large measure of Toronto’s success is a consequence of omission rather than commission.

The bad guys? Mayors Somerville and Dennison who tried every which way to block the building, countless callow councillors, a know-better press, protectionist architectural associations, sullen tax-averse voters. But the struggle for the building triumphed, albeit by an agonisingly narrow margin. For once the big idea did not die.

Armstrong’s compelling book takes us through the drama from its beginning in 1952. Councillors and civil servants had long known they needed to find more modern accommodation to replace the cramped and dysfunctional quarters of Old City Hall. Land had steadily been assembled in the district to the west known as the “Ward,” a storied neighbourhood with much the character of today’s Kensington Market. The replacement city hall was originally to be designed and procured the good old-fashioned way; indeed a cabal of prominent local architects had already produced a design, shown by Armstrong, of stultifying pragmatism. Nathan Phillips had a bigger idea both for the New City Hall and for Toronto. He wanted an international design competition, not just for a building but for a major civic space to make real his hopes for the city. Phillips was lucky that mayoral terms had just been extended, giving him the time to skilfully manage divided opinion in the city. That, and the shrewd selection of Eric Arthur, forced his bold idea through the endless doubters. Phillips even wrote the foreword to the competition brief, finally issued in 1957, in words almost foreign today in their clarity and purpose. The New City Hall, he insisted, must be “the most important element in the life of the city, a symbol of Toronto, a source of pride and pleasure to its citizens.” Armstrong has a wonderful photo of Phillips walking up the stairway of Old City Hall carrying a model of the New. His face is beatific.

Phillips’s demonstration of civic character was matched by Givens, mayor as the building reached completion. Givens personally sought out the sculptor Henry Moore for a major work befitting the new square. Council turned down his maquette and budget with derisive scorn. Givens then raised the money by putting together a consortium of private donors, so impressing Henry Moore he lowered his fee. The resultant work, “The Archer,” stands today as a perfectly positioned counterpoint to the scale and design of both square and building.

The city received more than 500 submissions to the competition, creating some unique logistical problems for competitors in making their entries and for jurors in reviewing so many architectural models and drawings. One submission failed to meet the due date, stranded on a beached freighter in the St. Lawrence, such were the perils of pre-FedEx times. The only place large enough to display all the submissions was one of the big buildings at the Canadian National Exhibition. Jurors were so worn out moving from scheme to scheme they were eventually all issued wheelchairs on which to scoot around.

The decade after New City Hall’s opening saw a flourish of civic energy and excitement that has marked the city to this day.

Armstrong shows us all the detailed entries from the second competition round of eight shortlisted architects, a list that included international stars such as I.M. Pei and Kenzo Tange. Hindsight is easy, but to contemporary eyes Revell’s scheme was the clear winner even from the first round. Remarkably his winning second-stage design varied very little from his first. Its confident, relaxed modernism, its use of utterly original shapes, the clean design of the square: all seem to have arrived complete in one creative moment. The only significant later change was to move the higher of the pair of curved towers from east to west. Civic Symbol includes some elegantly simple line sketches of the building and its interiors drawn by Revell as part of his submission. They are instantly recognizable as the building of today.

Revell’s design did not win a unanimous vote, only carrying the jury three to two. A minority report expressed practical concerns about the inefficiency of the internal office layout, about excessive summer heat gain, about the separation of civic staff space between two towers. Everyone who works in City Hall, as I did a few years after it opened, knows these criticisms to be true. And everyone is equally delighted to suffer for the pleasure of occupying a work of art.

The decade after its opening saw a flourish of civic energy and excitement that has marked the city to this day. David Crombie at age 36 was elected mayor, proceeding to advance a whole new vision for the city. Jane Jacobs came to town and turned the place on its head. The arts, theatre and music scenes exploded. The utterly original Eaton Centre rescued a declining downtown. Contemporary Toronto was born, and Revell’s unique design was its catalyst.

Armstrong has given Toronto a fine book, assiduous in scholarship, rich with archival illustrations and a compelling read. He also reminds us that there is nothing so permanent as character, in cities as in people. The debate continues in our town: pragmatic mediocrity against international aspiration, protectionism against a leap to the future, cuddly and correct against bold and beautiful, good enough against great. And the book reminds that the nightmare of Mayor Rob Ford, who summoned dark spirits from deep inside Toronto, has long and tangled roots in our past.

The Fords are too easy a caricature. But high-aspiring good guys/gals are not that easy to spot in the contemporary city. Even the progressives are reactionaries. There is no chance Toronto would today contemplate clearing an inner city neighbourhood for a multi-block, modernist, foreign arrival. The public art committee would smother today’s Henry Moore in a heartbeat. Our now global city retains the suspicious instincts of a village. The great achievement of Armstrong’s book is that it lets us have faith in a less obvious but no less resilient aspect of our civic character. Just over 50 years ago against all the odds some remarkable people made the most extraordinary thing happen, creating the city we enjoy today. A great city is built by great people reaching for great things. It is as simple and as complicated as that.

Joe Berridge is a partner at Urban Strategies Inc. and the Bousfield Distinguished Visitor in the Program in Planning at the University of Toronto.