What's Yours Is Mine: Against the Sharing Economy

In January 2016, tempers flared at San Francisco’s international airport as cab drivers, many of them recent immigrants to the country, protested low margins, excessive competition and an overbearing parent firm. The demonstration, featuring honking, yelling and blocked traffic, mirrored similar occurrences in other U.S. cities in the past year. But the protestors were not traditional taxi drivers protesting Uber; they were Uber drivers protesting Uber.

Call this Sharing Economy 2.0, as what appeared to be predators only months previously become victims of the very technology-fuelled change they spearheaded. Or this might simply be structural change playing out as it has throughout human history. Technological advancement brings gains to some and displaces others. The gainers in turn are displaced in the next wave of technological change.

The difference, as Tom Slee points out in What’s Yours Is Mine: Against the Sharing Economy, his excellent and accessible assessment of the consequences of technology-driven change, is that its protagonists “sometimes describe the Sharing Economy as a new type of business and sometimes as a social movement. It’s a familiar mix of commerce and cause in the digital world.” 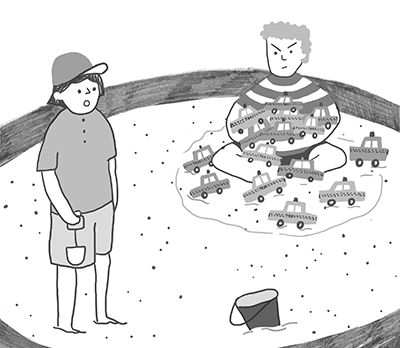 The phrase “sharing economy” evokes images of mutually beneficial change and prosperity—what the author terms “Inspirational Technology Tales”—when in fact the reality is contained in the title of the book, What’s Yours Is Mine. In case you miss the point the first time around, Slee’s view is summarized in the subtitle, “Against the Sharing Economy.”

The sharing economy describes the set of businesses that use the internet to match customers with service providers, of which Uber and Airbnb are the best known. In 2014, an umbrella organization for the sector called Peer had about 75 members. Hospitality (43 percent), transport (28 percent) and education (17 percent) dominate. The sector is mainly Silicon Valley based and funded, with a secondary participation by firms in some European countries and a sprinkling from Israel, South Africa and Turkey.

This landscape—internet driven, Silicon Valley based and sales oriented—is important in understanding the sharing economy’s impact. One would expect change to be driven quickly, to be relentless and to be harsh on some incumbents, particularly intermediaries (it would be disruptive, to use the fashionable term for this sort of thing). It would also reflect the mores of Silicon Valley.

Huge amounts of traditional investment fuel the seemingly mom-and-pop act of offering up extra labour or space on the internet.

Not surprisingly, this is what Slee finds. Consider the case of Airbnb, to which a chapter is devoted (as is one to Uber). While Airbnb claims that 87 percent of its hosts rent out the home in which they live (the classic example of the intent of the sharing economy), Slee notes that in New York City, the remaining 13 percent of hosts (who have more than one listing) account for 40 percent of all Airbnb listings. A distinct possibility is that Airbnb is being used “as a way to build a business by avoiding the rules around bed & breakfasts and short-term rentals.”

This also weakens another myth: that Airbnb and its ilk are principally disrupting the established hotel industry. In fact, one of Airbnb’s own senior staff is cited as saying that it wishes to “create a more collaborative relationship with the global hotel industry” and that studies show that its impact on hotels is “relatively negligible.” Smaller independent operators and bed and breakfasts have been hurt more than the large chains, Slee suggests.

Airbnb’s claim that you can “live like a local” is undermined by the experience in several European cities. In the summer of 2014, the Marais district in Paris received 66,320 Airbnb visitors, higher than its 64,795 residents. As for the self-described “regular people” who act as Airbnb hosts, in a particularly intrepid section about Rome, Slee finds a host who is actually a tech entrepreneur based in Austin, Texas.

And so on. Actually, three other observations are worth mentioning from the “and so on” myth–busting category. First, in case you missed the movie, we are reminded that despite its social-mission rhetoric, Facebook started as a “hot or not” web-based rating forum among students at Harvard. Second, huge amounts of traditional investment fuel the seemingly mom-and-pop act of offering up extra labour or space on the internet. Uber has raised about $7 billion from several Silicon Valley venture capitalists, Google Ventures, Goldman Sachs, the Qatar Investment Authority, Amazon CEO Jeff Bezos and China’s Baidu. Third, we are told—twice—that Uber founder Travis Kalanick is an admirer of Ayn Rand. So this is where the “sharing” in the sharing economy comes from.

With antecedents like this, is it any surprise that the current crop of sharing economy operations is found to be wanting in the social consciousness department? Slee is torn here. He admits that his treatise is driven by a “sense of betrayal,” suggesting that initially at least, the sharing economy carried with it the ideals of conjoined social and economic progress driven by technology. But there is also a full chapter devoted to the inherent contradictions involved in sharing and profit-seeking commerce being paired. Not surprising, then, that after much consumer outrage Uber was forced to limit its surge pricing practices in the United States, to avoid spikes of fares seven- and eightfold during a snowstorm.

Technological change, some abuse as a result, imperfect regulation as a response to it and shared benefits—this is really the story of the modern welfare state.

Notwithstanding the claims by some of its proponents that the sharing economy is a whole new phenomenon, it might be seen to be just another new business practice that caught established players, citizens and governments off guard, and is now provoking the necessary societal and regulatory responses. The surge pricing episode fits perfectly within this paradigm. That private businesses will be aggressive is not news. It happened long before the sharing economizers came along. That public indignation and regulation are now being used to temper the excesses of profit-maximizing firms is a classic response in the current “mixed economy” era.

Even the gambit of designating Uber drivers and Handy cleaners as independent contractors, so that taxes and workplace regulations are avoided, is shopworn. Slee points out that FedEx has now been caught out by a California court for classifying its drivers as independent contractors. Technological change, some abuse as a result, imperfect regulation as a response to it and shared benefits—this is really the story of the modern welfare state. While the rhetoric surrounding sharing economy firms might at best be hopelessly idealistic and at worst deliberately misleading, the broader storyline is not a new one. But I wish Slee had spent more time on the appropriate regulatory responses to the sharing economy, because, like the genie out of the bottle, it is here to stay.

When Canadians take an Uber ride, the fare payment goes to a subsidiary registered in the Netherlands for tax reasons. But we also know from the case of Amazon, which started out not collecting sales taxes in Canada, that there are ways to have web-based enterprises collect and pay local taxes.

Might Uber, Lyft and Zipcar be compelled to provide universal service in all neighbourhoods, or field a minimum number of cars throughout the day and night as regular taxi companies are? Might regulations covering hotels and bed and breakfasts be adapted to include Airbnb-listed sites?

The answer to these questions is yes, and many jurisdictions are working on exactly these issues. But with digital technology setting the pace, the policy responses are—and always will be—reactive not anticipatory. This state of affairs cannot amount to an indictment of sharing economy firms. Rather, it points to the need to create a culture that breeds innovation, and also to understand the strengths and limits that accompany it, and—just as important—to nurture the public processes that are required to shape its consequences when the need to do so arises.

Other questions are provoked by this book, for What’s Yours Is Mine is hardly a dictum limited to the modern digital-fuelled society.

Context matters. In North America, taxi driver positions lie at the bottom of the social and economic ladder. In many western European -countries, they are effectively closed shops. In the age of GPS, how pertinent is the famed knowledge of London cabbies? Unpublished academic research from France suggests that Uber drivers are drawn from marginalized parts of society, moving them up not down the ladder. They are younger than conventional taxi drivers, and have experienced higher levels and durations of unemployment than the national average or that of conventional taxi drivers. More than 80 percent of French Uber drivers have no other job, whereas in North America significant proportions earn a second income from their Uber occupation. The definitive study on the socioeconomic impacts of the sharing economy has yet to be done (and by its very nature is some years away from completion). It is entirely likely that the impacts will vary by country and sector, and certain that they will not all be negative.

Sparked by Jim Balsillie’s criticism of the Trans Pacific Partnership’s provisions on intellectual property, there is a debate in Canada about how best to participate in the 21st-century information economy, and what it will take to do so. Why is the overwhelming number of sharing economy firms spawned in Silicon Valley and funded by its eco-system? If this sector is characterized by “winner take all” and large rents accrue to the developer of intellectual property, then it is entirely in order for Canada to seek successful entry into this world, not insulation from it. Otherwise, we will continue to lament our branch plant culture, about which there is a long and, in some circles, cherished history in Canadian scholarship and policy.

We need to understand better the algorithms that drive digital platforms. Who designs them, to what purpose and with what consequence? In the chapter titled “Strangers Trusting Strangers,” Slee describes how ratings, the key driver of the credibility of sharing economy firms, are not neutral. There is now a wealth of evidence, set out in this chapter, that shows that when people rate objects (such as films on Netflix) the resulting distribution curve is the usual bell shape. But when people rate people, the resulting distribution is J-shaped with the large majority of ratings concentrated in the top one or two tiers. As a result, these ratings have less information content than a “normal” distribution might yield. And whatever the distribution, there remains the question of how the ratings from an “all ratings all the time” system are used to reward or penalize their subjects.

Finally, the sharing economy is generating reams of personal data about where we go, where we stay, whom we employ and how we pay. How this data is stored and used remains a defining challenge of our time.

Ultimately, the sign of a good book is that it provokes questions for the reader without the sense that the book is weaker for not answering. By this criterion, I consider Tom Slee’s book a success. But it would be a mistake to consider it the last word on the subject, for there is one thought more troubling than a world driven by innovation and change, and that is a world not driven by innovation and change.

Rohinton Medhora is the president of the Centre for International Governance Innovation.