In 1414, Admiral Zheng He, Grand Eunuch of the Three Treasures, set out from the Chinese port of Canton on an extraordinary journey. His naval retinue dwarfed anything the European powers of the time could possibly muster—62 galleons, more than 100 auxiliary vessels, 868 officers, 26,800 soldiers and sundry courtiers, eunuchs and servants. This great naval procession, part ceremony and part an act of genuine cultural curiosity, was called the Star Raft. “About the middle of October 1415,” wrote the pre-eminent China/Africa historian Philip Snow, “as Henry V’s army trudged through the mud of northern France towards Agincourt, a giraffe from Africa arrived in Peking.” Five hundred years later, the giraffe was hailed as a symbol of the revival of the relationship between Africa and China by a Beijing newspaper.

The symbol is a tough one to parse. Indeed, along the east coast of Africa, there are archeological remnants from Chinese merchants that date back a millennium, all of which are faintly mixed in with Arabic and Kiswahili trading histories along the east African littoral. There were small numbers of black slaves in China during the Tang and Ming dynasties, referred to by the pejorative kunlun. All of which emphasizes the point that China in Africa—the current overriding obsession of the continent’s western observers—is by no means a new phenomenon.

Zhang He’s vast fleet notwithstanding, it is the scale of recent Chinese engagement in Africa that is so noteworthy. Across the continent, since the beginning of the century, the People’s Republic has spent hundreds of billions of dollars on infrastructure, and reaped hundreds of billions worth of commodities in return. It is estimated that there are almost a million Chinese people across almost all of Africa’s countries. Roads and stadiums and airports have been built by Chinese state-owned enterprises; Africans have access to phones and clothing and electronics at cut-rate prices. And yet, peering through the murk, observers have asked whether there is any measurably fair quid pro quo at play here. Is this the dawn of a new colonialism, they wonder, a new scramble for Africa, in which the continent is once again left in tatters, its borders redrawn and its people left destitute? 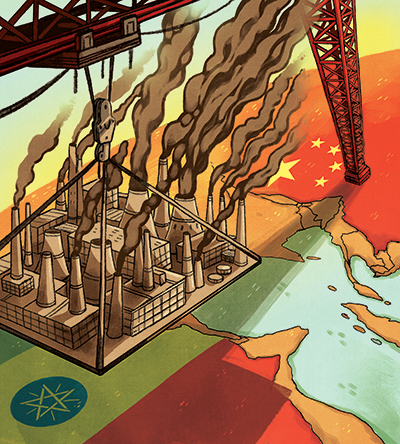 Unsurprisingly, the Chinese take great exception to the term colonialism when it is applied to their African adventures. Since the Chinese Communist Party came to power in 1949—coinciding, incidentally, with a rise in pitch of various African liberation movements—the Chinese have taken pains to link themselves historically and ideologically to the anti-colonial project. One of their great historical wounds, picked at when strategy demands, is the razing of Shanghai’s Old Summer Palace, the Yuanmingyuan, by a French contingent during the Second Opium War in 1860. This catastrophe has come to serve as China’s shorthand for colonial aggression; Beijing thus understood Africa’s pain. As CCP leader Liu Shaoqi told the World Federation of Trade Leaders in 1949, “in the Chinese people [Africans] see their own tomorrow, and the Chinese see in them their own yesterday.”

“We must tell [Africans], in order to help them,” exhorted a Work Bulletin of the Chinese People’s Liberation Army, 1961, “about the significance of the Taiping uprising, the Boxer uprising, Dr. Sun Yut-Sen, and the revolutionary experience of the Communists of this generation.”

This constructed kinship—a sort of brotherhood of the recently oppressed—has, since Mao, underpinned China’s engagement with Africa. The modern era of China/Africa relations starts in the mid 1950s, and was subject to the vagaries and shifting alliances of the Cold War. The Sino-Soviet split in the late 1950s led to Beijing defining itself in opposition to Washington, Moscow and their respective European allies, and apart from the developing world. The 1949 launching of their “Five Principles of Peaceful Coexistence,” based on mutual non-aggression, mutual benefit and equality, looked good from an African liberation hero’s perspective. But as the Cold War crawled on, China proved itself less adept than its enemies at understanding and managing the proxy battles unfolding across the continent. The Chinese were expelled from country after country for their troubles.

Nonetheless, the People’s Republic left a footprint. In 1964, following foreign minister Zhou Enlai’s much-touted African tour, China provided the continent with 53 percent of its loans, interest free, to be repaid over an extended period of time. (These conditions took their cue from the western aid rulebook, insofar as the money was only valid for the purchase of Chinese technical expertise and equipment.) China coughed up more than $2.5 billion to 25 African states from 1954 to 1977. Between 1967 and 1976, China transferred more than $143 million of arms to 15 African states. The construction of the Tanzania-Zambia railway in the 1970s, which cost the People’s Republic upward of $405 million, remains China’s largest international infrastructure project.

In the late 1970s, China’s domestic policies—in particular, the upheaval of the Cultural Revolution—and a rapprochement with the United States, slowed down involvement in Africa. But when Deng Xiaoping reset the economic agenda in 1979, establishing four special economic zones, and looked toward growth as the country’s driving force, the continent emerged as the go-to spot for natural resources.

Premier Zhao Ziyang made an eleven-country tour between 1982 and 1983, and, although he did not quite abandon the Five Principles, he read from a more pragmatic, develop-now-and-ask-questions-later lyric sheet. This resulted in China taking a tack that differed significantly from the western approach to development aid. Gradually, over the course of the past two decades, aid has become a dirty word, and strings-free investment a mantra. Since the recent global financial crash, African governments for the most part have ignored the entreaties of free market fundamentalist institutions like the International Monetary Fund. The robust state, with a managed economy, is in vogue. All eyes East.

In 2009, China surpassed the United States to become the continent’s largest trading partner. Size and prominence have invited criticism. In countries such as Namibia, Zambia and Mozambique, the rapaciousness of Chinese business interests coincided neatly with homegrown corruption, and has led to front-page scandals and a growing frisson of xenophobic distaste with Chinese-led initiatives. The ice-cold pragmatism involved in dealing with China—a country renowned for its human rights abuses—causes hand-wringing among the old guard of the liberation movements, especially in South Africa, a country constitutionally ballasted by some of the most glorious human rights rhetoric penned since John Locke.

But there is a growing feeling, continent-wide, that the 21st-century Chinese represent a once-in-an-epoch opportunity. No one imagined that China’s year-on-year growth would be sustainable—it has not been—but current policies of moving more than 300 million people from rural areas to the cities, combined with a very real consumer-culture revolution, means that African policy makers can expect continued interest from the Chinese for at least two decades. And this is to say nothing of Indian investment, which runs at roughly half of Chinese input, and the genuine and robust competition that China-in-Africa stimulates—the Japanese have taken note, as have the Americans. Natural resources are certainly a large part of the picture, but it is not inconceivable that by mid century, the world will be referring to Chad or Somaliland as the factories of the world, while rural China invents aerospace technology. This shift is already evident in Ethiopia, which has aggressively been courting Chinese manufacturing as it moves off the mainland.

None of this comes without a price. Bereft of proper management, Africa’s forests, fisheries and mines face utter devastation. The building of a road along the Samburu plain in Kenya has meant that the region’s elephants are being poached into near extinction; Mozambique’s shark population is under massive pressure because of the market for their fins. If growth is not tethered to an increase in skills and education, then Africa is left with nothing when the boom ends. Should China continue to turn the other cheek when dealing with rampant corruption, and African countries do not foster a measure of transparency when tendering contracts, the notion of competition and fair play is further denuded, and rot becomes the status quo. What is more, the emergence of a China model (and China watchers in Africa swear there is no such thing)—the notion of a highly managed, highly statist, one-party system that subjugates human rights at the altar of endless development and a tinctured form of capitalism—is enormously attractive to many African leaders, who see democracy as a costly inconvenience.

Even under Xi Jinping, China is not as monolithically united and focused as many imagine it to be. Africa, too, is a region of almost unimaginable ethnic and nationalist diversity. The future of both entities rests, however, on developing coherent local and regional policies that work in concert. The variables are staggering. That said, the stakes for Africa are so high—more than one billion people, massive tracts of wealth, an engine for global growth well into the next century—that blowing this opportunity has ramifications for every last person on the planet. For those on the continent thinking long term, and they are legion, this is an opportunity that must be grasped and managed. The alternatives are too bleak to be considered.