Repair is the theme of Kader Attia’s current exhibition, The Field of Emotion, at the Power Plant in Toronto, an exhibition that comes to Canada not a moment too soon. A deep-diving meditation by a leading French-Algerian artist, it gathers new thinking about physical, emotional, and societal repair, extending to us a treasure house of new tools with which to think about trauma both individual and communal. It’s a subject that was much on our collective consciousness in 2017, our sesquicentennial year, and remains so in its aftermath.

Last year’s official celebrations—which included an open-air Bono performance on Parliament Hill and a giant rubber duck floating in Lake Ontario—were, of course, deeply troubling for Canada’s Indigenous peoples, who were invited to celebrate the institution of the very government that stripped them of their lands and their rights. For these communities, and those who seek to understand them, Attia’s work  offers a kind of diagnostic touchstone. Maybe the failure of our sesquicentennial lay in the aim to assert a unified Canada when reality is so at odds with the fiction of societal harmony. Attia’s work, in fact, presents a critique of the very notion of repair, a western European ideal that is invested in the fantasy of returning things to their original state of pristine integrity. As he described it in a recent interview with Rachel Kent of the Museum of Contemporary Art Australia, in traditional societies everywhere, repairing an injury means showing the injury. He cites the calabash bowls that he encountered in Congo, where the broken vessels are repaired so that the break is clearly visible, purposefully so, revealing time and change; or the custom in Japanese ceramics in which mending is done with gold, so the cracks are highlighted, even embellished. The purpose of such strategies of repair is, he points out, “celebrating the injury, giving to this broken object a second life,” rather than making of it a simulation of what has been lost.

So it is that visitors at the Power Plant will confront irresolution and rupture instead of coherence as they walk from gallery to gallery in Attia’s exhibition. At the centre of it, a battalion of enormous roughly carved wooden busts fashioned from hundred-year-old trees take their stand in a work titled J’accuse, their countenances riven with dramatic distortions and gaping volumes. (The title refers to the title of Émile Zola’s 1898 polemic on the Dreyfus affair, and French anti-Semitism.) The source images used in the making of these sculptures, though, are not African masks, as one might at first assume, but rather the horrific archival photographs of the unprecedented gueles cassées or “broken faces” of First World War soldiers, documented for medical research purposes at the time. In an adjacent gallery, curator Carolin Köchling has installed a series of Attia’s photo works combining these images with those of African masks.

In the same gallery as the sculptures, Attia projects an excerpt from the 1919 anti-war classic J’Accuse by French filmmaker Abel Gance, a film about the Great War that Gance remade in 1938 to incorporate the disfigured faces of the wounded ­during the ­lead-up to the Second World War. Attia’s J’accuse, like Gance’s, is a commemoration of war that presents no sleek obelisk inscribed with the names of the glorious dead, no bronze pean to manly sacrifice, but rather an army of the mangled and mutilated, refusing resolution.

In another part of the gallery, Attia has installed a series of old and weathered railway ties, their cracks sutured with crude metal clips that serve to emphasize the splits and cracks that time and wear have wrought. A display of books relating to the colonial history of railroads in both Africa and the Americas, as well as promotional postcards and posters from the “glory days” of railway building, expand the field of meaning.

Time does not heal trauma. The farther back the injury exists, the stronger the phantom presence of what has been lost. For healing to occur, the truth must be faced.

The railway is a wound made visible, doubly so in Attia’s installation. Railways were built through the backbreaking labour of the colonized (or that of exploited immigrants). They also made possible the transport of goods that stripped the colonized of their wealth, as those commodities were rushed to European markets for the profit of the colonizers. Perhaps most memorably in modern history, they have been used for the transport of prisoners, most notoriously during the Holocaust. Attia wants us to see them for what they are: icons of modernity but also unwitting monuments to dispossession.

The clips in Attia’s salvaged railway ties—like giant staples or medical sutures—have also been applied by the artist to the cracked and splitting concrete floor of the gallery, and even on a shattered mirror, in which one encounters one’s own face. It’s a motif of visible repair that leaves us ruminating on the splits and fissures within the self, and within society.

For the Power Plant exhibition, Attia made a new film, titled The Body’s Legacies, Part One: The Objects, which gathers the testimony of Canadian and international curators and academics speaking about colonialism and the complexity of holding and displaying traditional objects made by colonized peoples, an area of hot debate within Canadian museum circles. It could serve capably as a kind of crash course on post-colonial theory and museology for audiences seeking an update. But the equation between the social and physical body is drawn out most brilliantly in Attia’s 2016 film Reflecting Memory, which dwells on the metaphor of phantom pain as a way of understanding the long and stubborn hold of the past upon the future.

Here, in a series of interviews, we meet a host of surgeons, historians, psychoanalysts, dancers, and neurologists, who discuss the phenomenon of phantom pain (whether physical or psychological) and the prognosis for healing. The testimony of French psychoanalyst Fethi Benslama lies at the heart of the film, as he addresses the psychodynamics of human communities, which share, as he puts it, a “mythical, fictional, mystical common body,” which will “slip into the imaginary of its members.” Once violated, or amputated, it will generate pain.

“Today history is being written in a way that tries to be true to those traumas, to give people the chance to live with this memory,” Benslama says. “This is true on an individual level as well. This is why so many people insist on the trial of their persecutors, not necessarily for vengeance, but to reinstate something and thus avoid ending up with a missing part, this phantom limb that doesn’t stop claiming its lost space.” Time, he says, does not heal trauma. The farther back the injury exists, the stronger the phantom presence of what has been lost. For healing to occur, the truth must be faced.

We meet a doctor from Berlin, who describes the traumatic impact of his family’s wartime secrets, the anxiety of those repressed memories generating ongoing legacies of dysfunction in himself, and in German society as a whole. “How could our grandparents or great-grandparents allow something like this to happen?” he asks—a question those of us in settler culture ask as well here in Canada, as we contemplate the lingering aftereffects of the residential school system, and our government’s ongoing failure to adequately address these ­historical inequities in the present.

Through Attia’s lens, we also hear from doctors and social workers who follow patients through recovery from amputation. They describe the pain derived from limbs that their patients no longer possess, and the visualizations of future lives—not restored but recalibrated—that are the only possible way to reclaim a future. One French surgeon describes the road to recovery in terms that may be broadly applicable as well to societies: “First you have to help them come to terms with what they were before,” he says. “You won’t be the same as you were. Cry, break down, scream, get angry, but you won’t be the same as you were before. And when we have passed that moment of mourning, then we can explain that they can rebuild a life which can eventually be as good.” We want to believe that’s possible.

We want to believe the same might be true in societies as well. The way back for Indigenous Canadians is barred, the passage of time creating an unbreachable distance that is ever widening, but the future is opening. Attia’s observations about healing and the overcoming of trauma made me think about the art that I had seen in 2017, and the way in which museums did the heavy lifting of repair in Canada in our sesquicentennial year, sidestepping the potential banalities of nationalistic affirmation. Whether one was looking at Every. Now. Then: Reframing Nationhood at the Art Gallery of Ontario, or Insurgence/Resurgence at the Winnipeg Art Gallery, contemplating the empty cradleboards in Kent Monkman’s Shame and Prejudice: A Story of Resilience, or walking the galleries of the reinstalled National Gallery of Canada’s permanent collection, in which Indigenous and settler cultures are braided together in a new, exploratory ­narrative, one was confronted with deeply felt expressions of traumatic loss and mourning, leavened with the regenerating force of creativity. In our museums, we bore witness to the past, and perhaps we started a path to healing.

Sitting in Attia’s exhibition, absorbing its impact, I found myself thinking of two works I had seen in the year just past. The first: a 2017 watercolour by the Inuit artist Heather Campbell titled Methylmercury, which I had come across at the Winnipeg Art Gallery last fall. The work depicts a naked Indigenous woman submerged in a living sea, yet held in the nightmare grasp of a black and malevolent force. Encircling her throat, it is also forcing its way into her opened mouth. To me, as a settler Canadian, this image is as horrific as any excerpt from Goya’s Disasters of War; I can’t imagine what it might mean for an Indigenous person, or the kind of catharsis it might enable. Methylmercury reminds me, too, that our injustices lie not only in the past, but in our present.

The second work to come to my mind was the giant, barge-like wooden structure Determined by the River by Tanya Lukin Linklater and Duane Linklater, on view in the inaugural exhibition at Remai Modern in Saskatoon last fall, a kind of sprawling convoy bound for the future, with objects and art works by Canadian Indigenous artists past and present on board.

Sarah Milroy is a Toronto writer and curator. 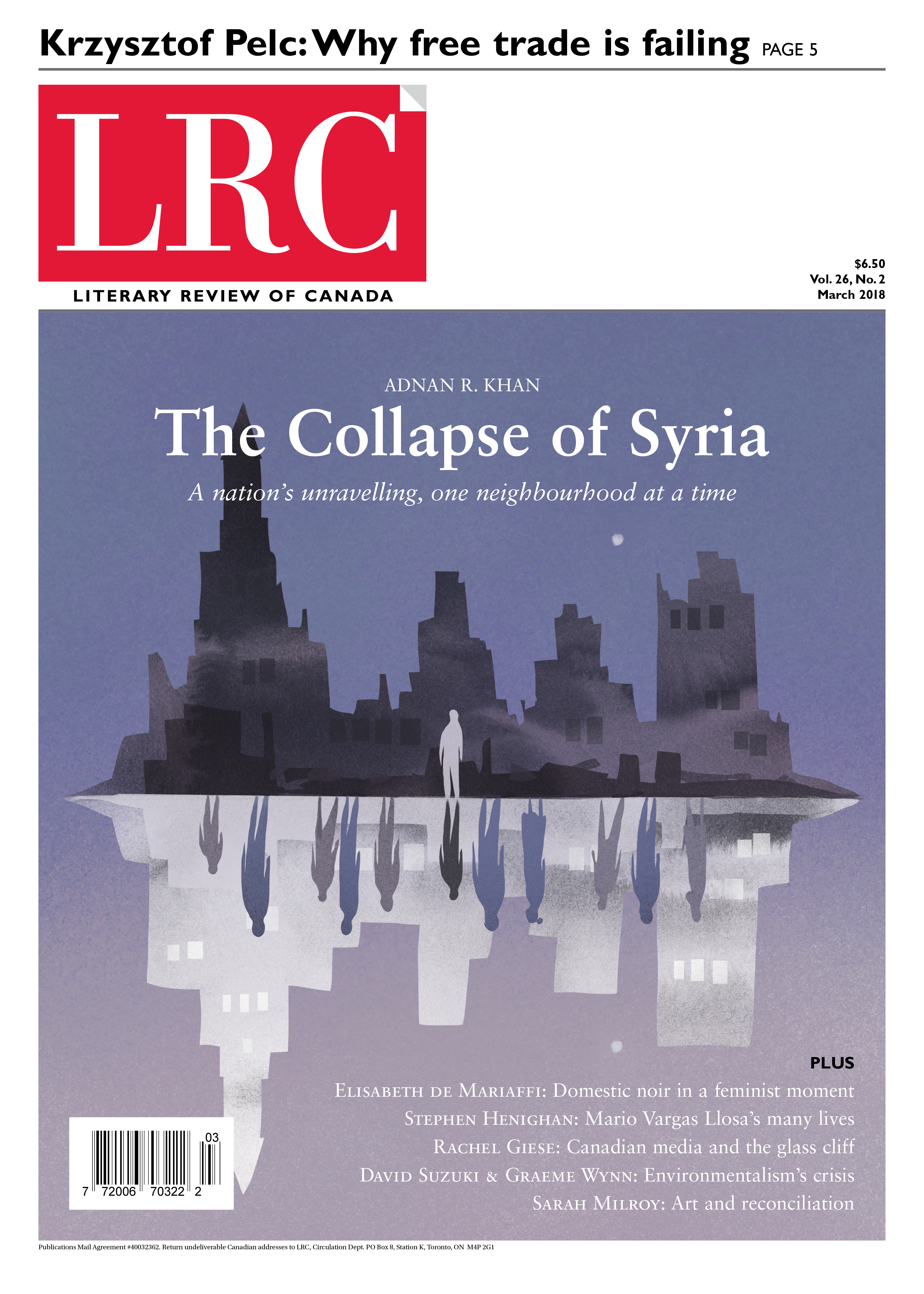