Senate reform never seemed deader than in 2014, when the Supreme Court of Canada told Parliament that almost any change to the upper house would be a substantial change, and that all substantial changes require constitutional amendments with broad or unanimous consent from the provinces.

Five years later, all the talk is of the new Senate.

Even before the 2014 ruling, Liberal leader Justin Trudeau had separated Liberal senators from the party’s parliamentary caucus. As prime minister, Trudeau began appointing non-aligned Canadians, distinguished more as high achievers and community builders than as party loyalists, to the chamber. Today the largest caucus in the home of “political prostitutes and broken-down politicians” (in the words of one 1915 commentator) is the non-partisan Independent Senators Group, and Maclean’s reports the place is “on the fast-track to next-level relevance.” All the while, government staffers are said to fret over a feisty Senate that derails their precious legislative schedules for legalizing cannabis, say, or sending posties back to work. Suddenly Canadians are looking at something new in the Canadian parliamentary experience: a non-­partisan upper house. 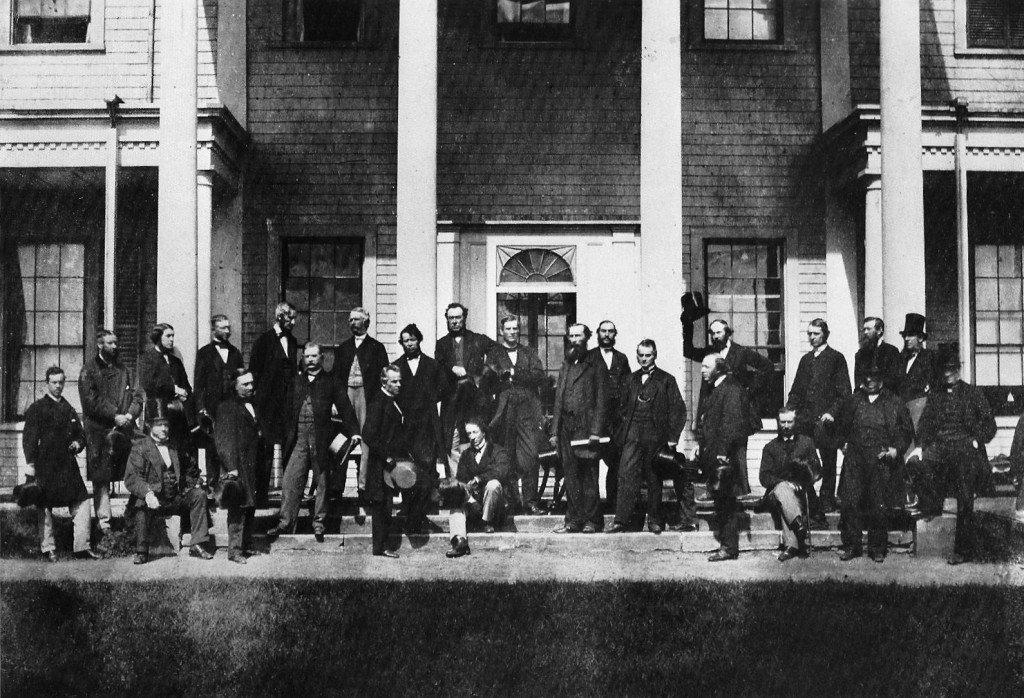 Despite all of our condescension today, Confederation-makers had a modern, forward-looking plan for the Senate.
Image by Library and Archives Canada

Can it last? Would that be a good thing? Above all, what is the Senate for?

There are two authorities that matter here: The Supreme Court makes law whenever it rules on the Constitution, so its recent pronouncements have broad implications. The other authority, less binding but still worthwhile, is the 1860s politicians who, despite all our condescension, knew what they wanted when they created an institution that has largely resisted structural change for 150 years. Call them the Confederation-­makers — just to have a non-patriarchal term and one less hackneyed than Fathers of Confederation.

In its April 2014 Reference Re Senate Reform, the Supreme Court declared, “The Constitution should not be viewed as a mere collection of discrete textual provisions. It has an architecture, a basic structure.” Tweaking any clause may affect the architecture of the whole, and all amendments need to be considered in that light. Then it laid down a couple of maxims about the Senate itself. Rule One: “The Senate’s fundamental nature and role [is] as a complementary legislative chamber of sober second thought.” (Translation: it is not supposed to rival the House of Commons.) Rule Two: “A popular mandate . . . is inconsistent” with Rule One. (Translation: it’s not supposed to be elected, either.) The Supreme Court’s view comes through clearly, describing a Senate that is not equal, not elected, not very powerful.

Does this view match the role that thirty-six nineteenth-century delegates, sent by the founding provinces to the constitutional conferences of 1864–67, envisioned? To get Confederation accepted by skeptical colonial legislatures and a doubtful public, delegates sometimes said whatever they thought audiences would accept, but that doesn’t mean they had no definite plan in mind. Just as the Supreme Court insisted on going beyond particular clauses to find the architecture of the whole Constitution, we need to look at the architecture of the Confederation-makers’ Senate plan.

That architecture was not reactionary and traditional but modern and forward looking. The Confederation-makers were the first generation of Canadian politicians to work within a full parliamentary system, which located authority in representative legislatures, not arbitrary governors. Often dismissed as “not democrats,” particularly for their views on female and universal suffrage, they were parliamentary democrats, convinced that the best government was one accountable to a legislature of the people’s elected representatives.

They also had experience with upper houses, both elected and appointed. As far back as Roman times, upper bodies have existed to contest the will of more representative lower ones. The mid-nineteenth-century House of Lords, for example, was a stronghold of the United Kingdom’s still powerful landed aristocracy, which wielded real authority. The United States Senate, originally appointed by the states and not elected by the people, was a powerful though hugely unrepresentative body. (It still is, with the twenty-five smallest states electing half the U.S. Senate, though they have about 17 percent of the population.) In the 1860s, with the legitimacy of such upper houses starting to be questioned, Canadian Confederation-makers concluded that a weak house would serve parliamentary democracy better than a powerful one. “It might cost something, but at least it will not do much” might well have been their maxim.

Had they wanted a powerful upper house to defend some reactionary aristocratic fantasy, they would never have made it appointive, which robbed it of the legitimacy to stand up to the elected, representative Commons. Had they intended it to defend regional or provincial interests, they would have given the power of appointment to the provinces, not the prime minister.

Consensus on the Senate was strongly and tenaciously held. William Pearce Howland of Ontario, one of the few delegates who did support an elective Senate, recalled in his memoir that British officials laughed in disbelief at the prospect of appointed members, but Colonial Minister Lord Carnarvon described in his diaries the intransigence of the colonials, who presented “unqualified opposition” to British objections.

Broadly, the Confederation-makers structured the Senate to be what John A. Macdonald called a house of “sober second thought,” and what George Brown assured one of his concerned supporters, the future prime minister Alexander Mackenzie, would be “a court of revision,” not a rival power. The Reference Re Senate Reform took a similar view. Indeed, the justices constitutionalized the phrases “sober second thought” and “complementary chamber” when they used them to define the Senate’s role.

The Supreme Court also confirmed in 2014 that formal changes to the structure of the Senate would be very difficult. Political commentators had long insisted that informal changes were equally impossible: prime ministers would never give up the power to appoint their friends and supporters. A rare exception is the American scholar James T. McHugh, who has long argued that Senate reform need not mean direct elections, and that norms like partisanship seem inevitable only until they no longer are.

It may yet transpire that Trudeau’s experiment with non-partisan appointments will be a quixotic moment, to be washed away by the next prime minister. On the other hand, Trudeau and his policy advisors may have grasped why the appointment power can adapt to the twenty-first century. What has changed since 1867 is patronage.

Nineteenth-century prime ministers wanted the Senate to be weak, but they also needed it as a pillar of the “spoils system.” As party leaders, they lacked the elaborate organization of policy promotion, campaigning machinery, and loyalty-building tools that today’s parties provide. Instead, jobs for the boys, including Senate seats, enabled prime ministers to run their parties and keep their partisans loyal. (And they were all boys, at least until Cairine Wilson’s appointment in 1930.) Early commentators deplored patronage’s corruption of the Senate, and politics in general, but they acknowledged politicians’ vociferous claims that it was essential to the party system. “Responsible government cannot be carried on in any other principle,” as Macdonald put it.

Today patronage is even more reviled. Trudeau and his team may have been a step ahead of the pundits in grasping that — with the party apparatus now driven by fundraising and messaging, instead of jobs for the boys — patronage blights the reputations of those who accept and those who wield it more than ever before. What’s more, it no longer provides anything essential to a ­governing party.

Now that the Supreme Court has constitutionalized the founders’ vision of the Senate as complementary, unelected, and sober-second-thought-only, prime ministers may find there is little downside to tolerating a non-partisan chamber they need not control. Occasional delays in the passing of House of Commons legislation may occur, but the secondary position entrenched in the Senate by the Confederation-makers and the judges suggests the delays will continue to be temporary. Some negotiation should be tolerable in a bicameral system designed to provide a revising function. For the moment, the Conservative Party and Stephen Harper’s appointees remain committed to party discipline in the Senate. But in office, a Prime Minister Scheer might calculate there is not much to be gained in being the one who appoints the next Mike Duffy.

The partisan Senate, moreover, has always been handicapped in performing credibly the revising function that justifies its existence. Canadians have reason to assume that a government-­dominated Senate will mostly rubber-­stamp legislation; an opposition-led Senate will quibble and then yield anyway. If 105 talented, respected, unaffiliated new-look senators can somehow manage to organize themselves into a chamber capable of getting things done, a still secondary but independent Senate might just begin to fulfill its mandate to evaluate, revise, and improve House legislation. And be persuasive in doing so.

Could a new-look Senate inspire a new-look Commons? If senators begin to distinguish themselves for effective critical contributions to the shaping of legislation, they might provoke jealousy and emulation on the part of MPs, who currently act as if on being elected they must become the only people in the country with no political opinions of their own.

Is the Senate on a fast track to relevance? “Fast” is not a word often linked to the upper chamber. But it is possible that the combination of the Confederation-making vision, the judicial restatement of it, and the shrinking place of patronage in Canadian political culture may finally bring us a Senate that does not do too much, but that does it well.

Christopher Moore is a historian in Toronto.