In an evocative scene, roughly halfway through his first book, Overrun, Andrew Reeves proves how singularly committed he is to exploring the Asian carp invasion of North America. The award-­winning environmental journalist has just hopped aboard a commercial fishing boat on the Illinois River, heading out to net Asian carp, when one of the crew tells him he doesn’t have to get dirty extracting fish if he doesn’t want to. “Sure,” Reeves writes, “I’ll take a pick.” Seven hours later, he’s covered in fish blood, slime, and feces, and stewing in his own sweat after helping to remove roughly 3,200 kilos of carp from the river. Like his journalism, Reeves’s book is an engaged and experiential example of immersive investigative reporting.

Over four years, Reeves conducted interviews with wildlife officials, scientists, environmentalists, and anglers, and visited fish farms, processing plants, laboratories, and water bodies across North America. With a keen ear for dialogue and a magazine writer’s knack for scene setting, he explores how “we got into this mess.” The mess he’s referring to, of course, is the exploding Asian carp population, and the consequences for native fish and habitat from the Gulf of Mexico to Canada. 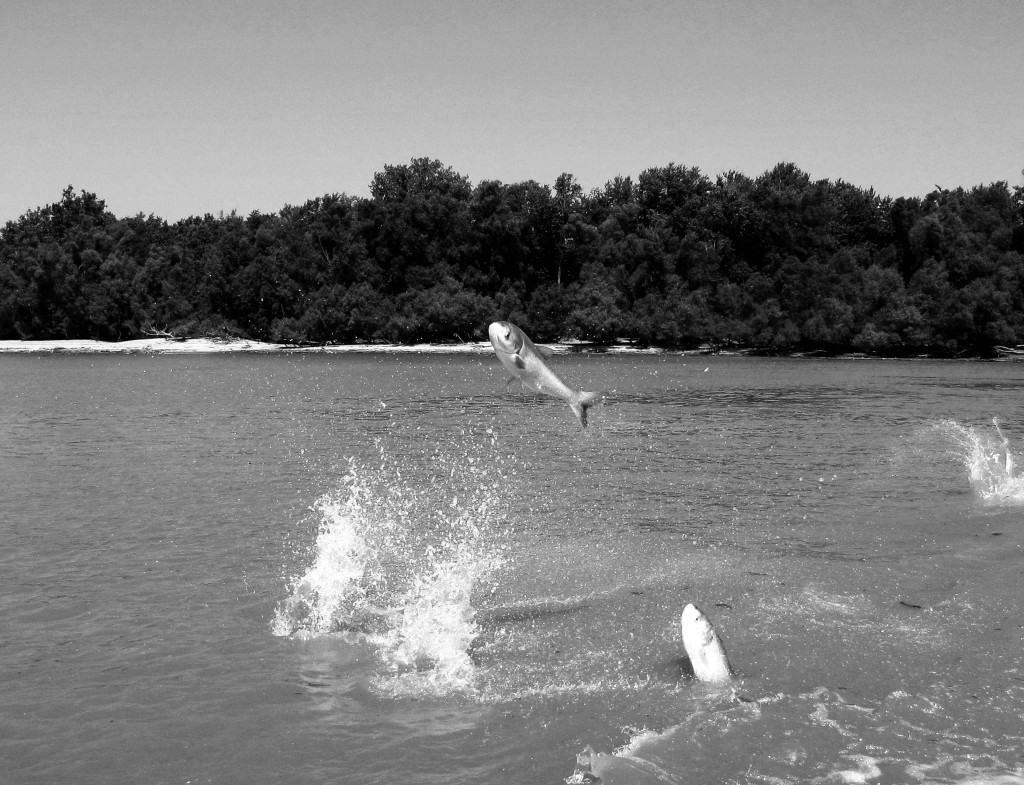 With no natural predators in the Great Lakes,  Asian carp threaten a $7-billion fishing industry.
Image by LouisvilleUSACE / flickr

Anyone with a passing interest in ecology or the environment likely knows that Asian carp are a serious problem. Potentially worse than the spread of sea lampreys, round gobies, and giant hogweed combined, the invasion is one of the continent’s most pressing and complex environmental issues. The non-­native fish have now migrated so far north that they’re poised to enter the Great Lakes.

The biggest concern with Asian carp — the common name covers four species, bighead, silver, grass, and black carp — is that they can out-­compete native fish for both food and habitat. Bighead and silver carp eat plankton, which native mussels and some other fish depend on. Grass carp consume aquatic weeds — up to three times their own weight daily — and can drastically change river and shoreline vegetation, thereby ruining crucial spawning habitat. Meanwhile, black carp eat snails and mussels, including native species that are already endangered. Silver carp are also a problem because they jump out of the water when spooked by motors, which poses a serious safety hazard to boaters and personal watercraft users. Imagine cruising along at forty kilometres an hour when your face makes hard contact with a leaping fifteen-­kilogram fish.

Asian carp have no natural predators in North America, and because they thrive in our relatively cooler waters, they can quickly establish themselves as a dominant species. In some parts of the Mississippi and Illinois Rivers, for example, silver and bighead carp now make up 75 percent of the fish biomass. They’re also very adaptable and can withstand a variety of temperatures and conditions. Bighead carp can grow to 1.3 metres in length, weigh up to sixty-­five kilograms (though twenty kilograms is more common), and live at least nine years. Silver carp can get up to a metre in length, weigh roughly fifteen kilos, and live for twenty years. Grass carp can be up to 1.5 metres long, weigh up to forty kilos (though they are commonly between ten and fifteen kilos), and can live for decades. Unchecked, they all “breed like bunnies, and can double their biomass in less than three years,” Reeves writes. If a self-­sustaining population of Asian carp becomes established in the Great Lakes, a $7‑billion fishing industry could be doomed.

Reeves’s book is original, refreshing, and occasionally surprising because it challenges conventional thinking on how the problem began and what we can do to solve it. The widely accepted origin story is that grass carp imported by fish farmers in the 1960s first escaped into tributaries of the Mississippi after flooding. Reeves goes the extra mile, though, and actually names the fish farmer at ground zero: Jim Malone. He then tracks down Malone’s son to learn more about the man and his intentions, and discovers a scapegoat who was not as unscrupulous as is commonly believed. Misguided? Without a doubt. But nefarious? No.

Now vilified, Malone was actually looking for chemical-­free solutions to control aquatic weeds in his rearing ponds. He was likely inspired by Rachel Carson’s seminal 1962 book, Silent Spring, which put America’s excessive reliance on chemicals and pesticides under the microscope. Just as Upton Sinclair’s The Jungle had exposed the meat-­packing industry two generations before, Carson’s book uncovered the ills of rampant pesticide use, practically launching the modern environmental movement in the process. Malone saw grass carp as the perfect biological solution to weed control, as did the Arkansas Game and Fish Commission, which started raising grass carp in the mid-­1960s and actually introduced an official stocking policy in 1972. That’s the same year that Malone imported bighead and silver carp to combat algae and for use in treating sewage ponds.

Along with creatively detailing the introduction of Asian carp and the negative effects on the ecosystem, Reeves gives a thorough accounting of what we’re doing to solve the problem. In plain, simple language, he breaks down complicated control and prevention measures that include using pheromones to trap, monitor, and disrupt carp; increasing carbon dioxide in the water; using sound as a deterrent; installing electrical barriers; creating a hydrological separation; and the potential role of the emerging field of eDNA analysis. He also goes through the various ways that we might use the fish to our advantage. Some that are removed by commercial fishers, for example, end up as fertilizer. And while there have been various attempts to market the fish to consumers, none have succeeded. Asian carp are just too bony and difficult to process to make them commercially viable. It also can’t help that they’re as ugly as, well, a carp.

Despite the complexity of the problem and the mitigation methods, Reeves doesn’t get bogged down in jargon. He skillfully connects the dots between scientific intervention and major policy decisions that affect everyday people. Attending a meeting of the Chicago Area Waterway System Advisory Committee in 2015 — “an ad hoc cluster of city agencies, government entities, private industry and environmental groups who met monthly to find some kind of consensus on handling Asian carp” — Reeves captures the human emotions behind the controversial proposal to close the Chicago Sanitary and Ship Canal, which connects the Mississippi watershed with the Great Lakes. “Someone from Michigan choked up while describing to me Asian carp’s devastating potential in Lake Michigan,” he writes. “I looked away as her eyes filled with tears.”

The invasion is potentially worse than the spread of sea lampreys, round gobies, and giant hogweed combined.

While it’s clear Reeves is personally invested in the subject matter, he lets his sources speak for themselves and refrains from offering much opinion until Overrun’s conclusion. Despite all the doom and gloom he encountered in writing the book, he remains optimistic:

To have any success against Asian carp, and the next round of aquatic invasives sure to come, new voices, opinions, small-scale options and entirely new ways of thinking about how we build our cities and grow our food must be included in future debates. These alternatives, taken together, can effect real change.

Reeves recommends a holistic approach to solving the problem and wonders if too much attention is actually being given to the Great Lakes. To be successful, we need to focus not only on controlling Asian carp in Lake Michigan or Lake Ontario but on healing the whole continental watershed, he believes. As he learned from Jim Garvey, a Southern Illinois University biologist, “Asian carp are just an example of the environment telling us that we have done something dramatically wrong to our ecosystems.”

A number of organizations and agencies — at the state, provincial, and federal levels — are working to prevent the spread of Asian carp, but Overrun emphasizes the need for even more interdepartmental cooperation, better-funded research, and additional money for ­prevention.

With the anti-­science rhetoric coming from the U.S. president and, to some degree, the premier of Ontario, it’s essential that we keep Asian carp control on the public’s radar. Reeves notes that Donald Trump’s first budget proposal removed nearly all Environmental Protection Agency funding and “called for the Great Lakes Restoration Initiative, the program responsible for funding the bulk of Asian carp work, to operate on a paltry $10 million, down from its annual budget of $300 million.” Time will tell if that kind of short-sightedness will be the edge that Asian carp need to gain an even stronger foothold. Hopefully, the pendulum will swing back, as the consequences of complacency are simply too great to ignore.

Bob Sexton is the managing editor of Outdoor Canada magazine.