Enduring Alliance:  A History of NATO and the Postwar Global Order

This year marks the seventieth anniversary of the North Atlantic Treaty Organization, and to say that the celebrations will likely be subdued is an understatement. Co-­founded by Canada in 1949, in the aftermath of the Second World War, the transatlantic alliance has grown from a membership of just twelve countries to twenty-­nine following Montenegro’s entry in 2017. NATO’s allure — the reason it attracts such a diverse membership, including Iceland (which has no standing army) — comes from being the world’s pre-eminent military alliance, anchored by the military and economic might of the United States. Today, more countries seek to join it, like Ukraine, while others seek tighter bonds, as Brazil has recently. Yet, despite its successes, NATO currently confronts a litany of major challenges.

Internally, a few alliance members (Poland, Hungary) are leaning toward authoritarianism, and a third (Turkey) is already there. Forced migration and terrorism remain constant dilemmas, while populist movements and allegations of foreign election meddling have shaken governments on both sides of the Atlantic. A key member, the United Kingdom, remains impotent as it tries to navigate Brexit. And, of course, there is an outspoken American president, who holds a skeptical view of long-­standing allies. 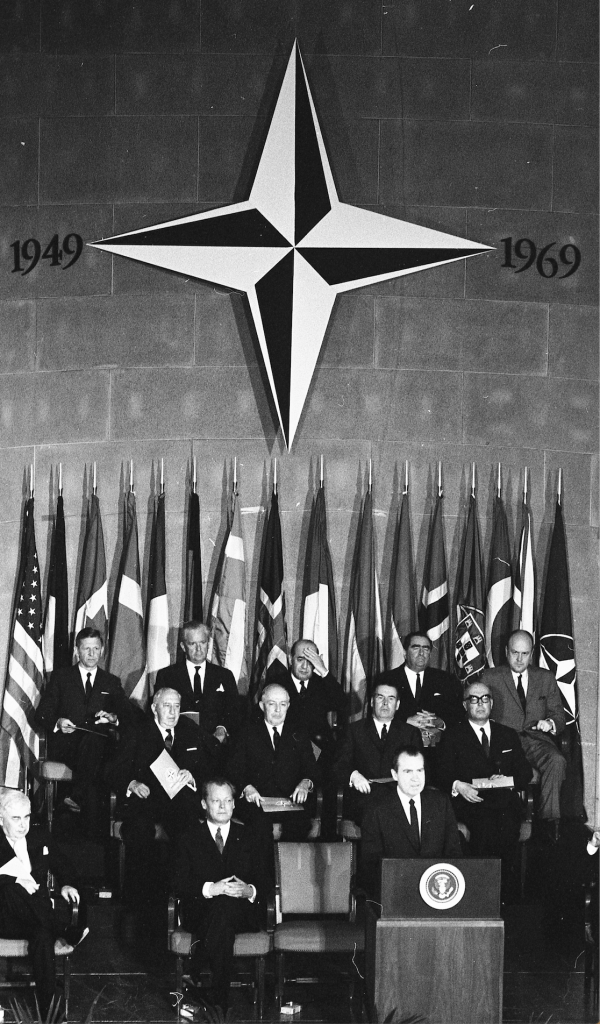 Even before his inauguration two years ago, Donald Trump threatened to withdraw the U.S. from NATO, and he reputedly came close to doing so at several points in 2018. Trump has called NATO allies “delinquent” and has erroneously claimed that the U.S. foots up to 90 percent of the alliance’s defence bills (the U.S. pays 22 percent of NATO’s common budget). Viewing the ­organization as a mafia-­like protection racket, the president has demanded that members spend the equivalent of 4 percent of their gross domestic product on defence, when only five of the twenty-­nine countries could meet targets of 2 percent of GDP in 2017. His administration has also ignited trade fights against key U.S. allies, labelling countries like Canada “national security” threats in recent trade talks.

Externally, a revanchist Russia has made inroads near NATO’s borders, seizing Crimea in 2014 and backing a secessionist war in eastern Ukraine. Further afield, China continues its own arms buildup and the weaponization of its economic power. To no surprise, the Financial Times described recent events as “the biggest upheaval” since NATO’s founding.

It’s tempting to think that NATO has entered new territory, one with less than rosy prospects. However, if the Cold War’s persistence for four-plus decades is any indication, the organization may have a longer shelf life than many of its detractors and worried supporters think. The alliance, in the words of the NATO scholars James Sperling and Mark Webber, “seems to possess an inexhaustible capacity for recovery,” a theme that runs throughout Timothy Sayle’s new book, Enduring Alliance.

Sayle, a history professor at the University of Toronto, provides an in-depth analysis of NATO decision making, from its formative years in the 1940s and ’50s to the end of the Cold War and the collapse of the Soviet Union in 1991. Through personal papers, cabinet memoranda, and other previously classified documents retrieved from a dozen archives across North America and Europe, he contextualizes the personal perspectives of the alliance’s political, military, and diplomatic leadership. Countering a widely held public perception, Sayle persuasively makes the point that the primary fear among these leaders was not the Red Army crossing Germany’s Fulda Gap but rather the “problem of democracy” itself.

At its heart, NATO was — and indeed is — about maintaining the balance of power in Europe. Two world wars had deeply scarred the continent, but a transatlantic alliance promised to, in the words of its founding secretary-general, Lord Ismay, “keep the Soviet Union out, the Americans in, and the Germans down.” The true challenge that faced the new organization, though, was less about armies and more about public support.

Prosperous societies that favoured expansive and expensive welfare states — and that became further removed from the memory of the wars of 1914–18 and 1939–45 — represented a critical weakness in the eyes of some senior diplomats, political leaders, and military officers in the U.S., the U.K., France, and West Germany (which are at the centre of Sayle’s analysis). They worried that the public could be cowed by Soviet intimidation and grow supportive of disarmament policies and the “political disintegration” of NATO members. Only a robust transatlantic military and political ­alliance — a so-­called Pax Atlantica — endowed with American nuclear weapons could stiffen political resolve and ensure that a modicum of defence spending was maintained. Easier said than done.

Throughout the Cold War, alliance leaders had to contend with a multitude of crises that might easily have ripped NATO apart, perhaps irrevocably. The 1956 Suez Crisis opened a deep fissure between the U.K. and France, on one side, and the U.S. on another, bringing the world close to a third world war — a situation resolved only by the diplomatic skill of Canada’s secretary of state for external affairs, Lester B. Pearson. In 1966, Charles de Gaulle, still fuming over the lack of allied support for France’s war in Algeria and the general decline of French power and prestige since 1945, pulled his country out of NATO’s military command (France would rejoin in 2009). For Canada, the withdrawal had the frustrating consequence of forcing the closure of an air force base in France, requiring a hasty and costly transfer of personnel and aircraft to West Germany. And in a topical historical parallel to Trump’s clamourings, U.S. president Richard Nixon, fearful of Soviet influence in western Europe and ­irritated by waning European defence expenditures, insisted on preferential trade deals in exchange for continuing military commitments (a demand that faded as his administration descended into scandal).

It may surprise most readers to learn that it was the popular anti-­nuclear movement of the 1980s that “posed the most severe threat to NATO’s endurance,” according to Sayle. The Soviet Union and its Warsaw Pact allies maintained a clear military advantage in troop and tank numbers. Keeping defence costs relatively low for NATO members, and therefore not undermining social spending, was possible only with the security umbrella provided by U.S. nuclear weapons stationed ­throughout Europe. If they were taken out, it was feared, the alliance could no longer be ­sustained.

The West needed a new transatlantic alliance that promised to “keep the Soviet Union out,
the Americans in, and the Germans down.”

Ironically, the Soviet Union itself helped heal some of NATO’s internal wounds, particularly when it crushed an uprising in Hungary within the same week as the Suez Crisis and invaded Czechoslovakia in 1968. The actual collapse of the USSR put an end to the anti-­nuke debate. In other cases, though, it was the desire of allied leaders not to go to war that ensured NATO’s durability. The certainty of the alliance’s purpose and the stability it demonstrated time and again proved too enticing to forfeit, no matter the disagreement.

Sayle does not delve deeply into NATO’s post-1991 period. But, despite limited access to relevant documentation, his argument appears to be equally applicable here. Whether manifested in debates around burden sharing or the disproportionate distribution of troop casualties (as was the case during Canada’s 2006–11 combat mission in Afghanistan), defence versus social expenditures, European populism, or rising isolationist and protectionist impulses in the United States, the “problem of democracy” appears to be as prominent a concern for NATO leaders today as it was for their counterparts seventy years ago.

A series of crises since the fall of the Berlin Wall, such as the breakup of Yugoslavia in the 1990s, the 9/11 terror attacks, and the 2003 Iraq War (leading to a split reminiscent of Suez), have demonstrated the alliance’s ability to both adapt to new international security environments and overcome major foreign policy differences. Put another way, certainty and stability still matter. Of course, Russia’s actions, like those of its Soviet predecessor, have also helped remind leaders of the relevancy of Lord Ismay’s dictum. So while the American president clamours for more spending and better trade deals, for now, at least, history suggests that the Pax Atlantica will endure.

Jeffrey F. Collins is a research fellow with Dalhousie University’s Centre for the Study of Security and Development. He lives in Prince Edward Island.