Hello, Friends! Stories from My Life and Blue Jays Baseball

Duke Snider’s last day broadcasting Montreal Expos baseball on the radio was October 5, 1986, a Sunday afternoon. The Expos were playing the Philadelphia Phillies in a game that didn’t count for much, and they ended up losing 2–1. I recorded the broadcast for sentimental reasons: Duke and his long-time partner, Dave Van Horne, had been essentially living at my house for twenty years.

All these years later, listening to the audio cassette that, unsurprisingly, I never threw out, I notice that there was little sentimentality expressed in the booth that day. Duke and Dave did, however, launch into a splendid discussion during a lull in the play, based on the fact that the Philadelphia second baseman was named Legg and the third baseman was named Schu. When Duke said it was too bad that the Philadelphia catcher named Barry Foote was no longer in the game, Dave decided the bit had gone far enough. “Wouldn’t that be something,” he said, absently, and turned to other things. 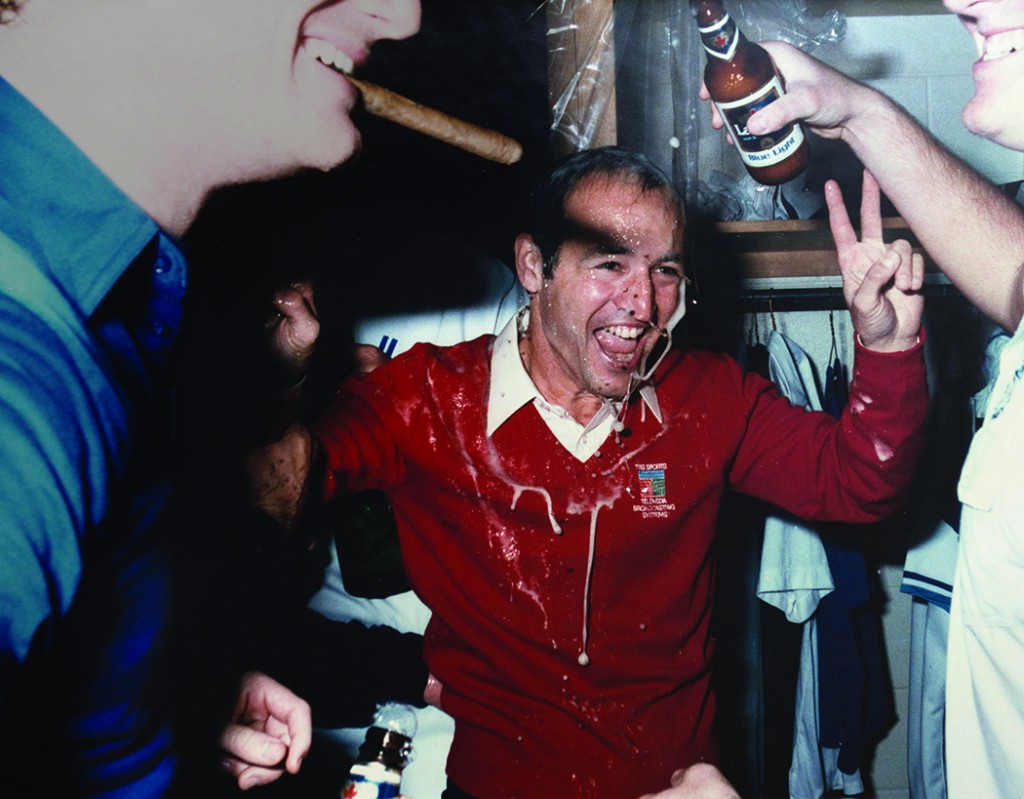 For thirty-five years, Jerry Howarth helped us follow and celebrate the game, as he did here in 1985.

No matter how a game is going, there is always time for conversation in baseball. It has a certain pace, a certain sense of history that has proven difficult to destroy. In the 1980s, baseball was romanticized to the point where people who had actually played the game no longer recognized it. I call this the Thrill of the Grass period, after one of W. P. Kinsella’s books. Around the same time, baseball became a soft-­focused metaphor for life. Writers were forever finding truths in it that rather mystified people who actually played, and who knew that the beautiful spheroid really hurt if it hit you, and that your opponents in this soft-focused metaphor might call you a hyphenated noun because they hated you.

Today, fans have to contend with pseudo-­scientists, who have found ways of measuring and quantifying every aspect of the game, bringing us such terms as “launch angle” and “spin ratio” and “wins above replacement.” But baseball is somehow still baseball, particularly on the radio.

Unlike televised broadcasts, radio is content to let the game happen. Where TV tries to make it fast — frantically switching camera angles between pitches, announcers yakking endlessly about exit velocity and other things they find on the ­internet — radio takes its time. The listener, freed of the necessity of watching, can be doing the dishes or tending to the dock.

Essentially, radio broadcasters tell us a story each and every game. They’re helped by the fact that baseball is so easy to visualize: We can picture the field. We know what a fly to left looks like or a one-hopper to short. If we follow the ball, in our mind’s eye, we follow the game. In other sports, there are important things going on away from the pigskin or the puck, and radio can’t help us see them.

Back when the Expos were playing, I had radios strategically placed around my house, so that we wouldn’t miss a word of Duke and Dave. My late sister, Alison, who covered the Blue Jays for the Toronto Star, had speakers set up around her house, too. They enabled Tom Cheek and Jerry Howarth to follow her from the living room into the kitchen and, if necessary, the shower.

Jerry Howarth, who was in the Blue Jays broadcast booth from 1982 through 2017, has just published a memoir that will delight those who avidly follow Toronto’s team. If the names Frank Catalanotto, Huck Flener, and Gustavo Chacin ­resonate with you, this is your book.

To be fair, Hello, Friends! has different aims. Howarth briefly sketches out his apprenticeship years, then proceeds chronologically through every one of his seasons with the Jays, mentioning virtually every player, coach, and manager he met along the way: the first at‑bat in the big leagues, a career highlight or two, something about their post-­baseball lives (I counted four suicides, which seems unusual). And in case you’re interested, Howarth’s favourite all-time Blue Jay was the relief pitcher Tom Henke.

Howarth is about as positive a person as you’ll ever meet, so there is not a lot of dirt-­dishing. He thought the very talented third baseman Kelly Gruber lacked a work ethic. He thought the ­manager Jimy Williams was too tense. Aside from that, pretty well everybody was nice.

Nice also applies to Howarth’s life. Any setback provided a lesson worth learning. People who fired him or didn’t hire him turned into lifelong friends. People who called him out for what he said about the team always came around. Mistakes only made him a better broadcaster.

Howarth once sharply criticized the attitude and defensive abilities of the shortstop Jose Reyes. The team’s president, Paul Beeston, took issue with the tone of the comment, so Howarth had to apologize to Reyes personally. Looking back, Howarth makes no apologies for his apology. And that underlines the difference between a broadcaster and a ­journalist.

When baseball first went on the radio, the commissioner, Kenesaw Mountain Landis, instructed announcers: “If you see men putting up a gallows in centre field and then see them lead me out to it and hang me on it, describe it into the microphone but don’t question the justice of the hanging.” Howarth followed that advice throughout his career, as he does in this book: “I feel great pride in being the Blue Jays announcer while still maintaining my objectivity in highlighting the game itself.”

Of course, “objectivity” means something different to broadcasters than it does for journalists. Most fans accept that hometown radio personalities are employed by the team, and many even prefer hearing a positive spin coming from the booth. The majority of broadcasters today follow Howarth’s policy of a neutral tone of voice punctuated by occasional outbursts of joy when good things happen for the good guys. Here’s one that might be familiar: “Fly ball, deep left field! Yes sir! There. She. Goes!” That would be Jose Bautista’s bat-flip home run in 2015 —  just as thrilling to hear as it is to watch.

Not everybody subscribes to Howarth’s model, as a new biography of the legendary Harry Caray points out. Caray, who died in 1998, started with the St. Louis Cardinals before moving to the Chicago White Sox and, most famously, the Chicago Cubs.

A biography, Don Zminda’s The Legendary Harry Caray is more analytical than Howarth’s first-hand account. It portrays Caray as shrewd enough to recognize that broadcasting as a fan meant occasionally expressing a fan’s frustrations. “I started ripping everybody in sight,” he said of his early career. “It was a calculated thing to make people know you’re there. And it worked.”

This philosophy made Caray a hero to fans and caused fear in players. In the 1960s, when the Cardinals were winning pennants and even a World Series, Caray made a bête noire out of Ken Boyer, a very good third baseman. Caray was relentless in his criticism: “It’s the last of the ninth. The Cardinals have the tying run on second. Two out. Boyer’s the hitter. We’ll be back in one minute with the wrap‑up.”

Caray’s attacks inspired fan negativity toward particular players, some of whose careers were impacted. Cardinals outfielder Curt Flood summed up the reactions of the athletes: “By affecting public opinion . . . he affected our livelihood.”

When televised baseball began, broadcasters would switch during the game from radio to TV. Caray had some initial difficulty:

They told me, “Everyone will be watching the picture, so don’t talk as much.” . . . The first few days I hardly said a word, just pointed things out when they happened. Then the mail started coming in. “What’s wrong with Harry Caray? Is he sick? He’s not broadcasting like he does on radio.”

So he took his radio style to TV and made himself larger than life. He would broadcast games from the outfield bleachers. He would lead the crowd in singing “Take Me Out to the Ball Game.”  His calls became ever more distinctive: “Perranoski from the belt . . . the pitch. . . . Here it is. . . . Base hit!! Left field!! Sox Win! Sox Win! Holy Cow! The White Sox win!”

Caray also warred with management and his partners in the booth, had an affair with an owner’s daughter-­in-law, and jumped opportunistically from team to team. When he got to the Cubs he became even more beloved, perhaps having been ordered to lose his edge.

His style was easily caricatured (have a look on YouTube at Will Ferrell doing Harry Caray), but no one seemed to mind. “Caray’s voice,” wrote a Washington Post columnist, “carries across America the story of love in the afternoon.”

That was written long ago, at a time when the Cubs never played at night. When life was slower, without the internet. But it still seems appropriate. Despite all that has changed, these two books remind us that radio is the true voice of a game that continues to take its time.

Charles Gordon was, until recently, a rec league third baseman. Previously a humour columnist for the Ottawa Citizen and Maclean’s, he’s still a writer.