The winter after his debut ­season with the Montreal Alouettes, Herb Trawick, the Canadian Football League’s first African American player, noticed something unusual, but also something searingly familiar.

Trawick was twenty-­five and a two-way lineman who had signed with the Alouettes after playing college ball at the historically black Kentucky State University. He moved to Montreal in 1946, the same year Jackie Robinson played baseball with the Montreal Royals. Together, Trawick and Robinson navigated a new, bilingual city and placed Montreal at the epicentre of a seismic shift in sports and civil rights. 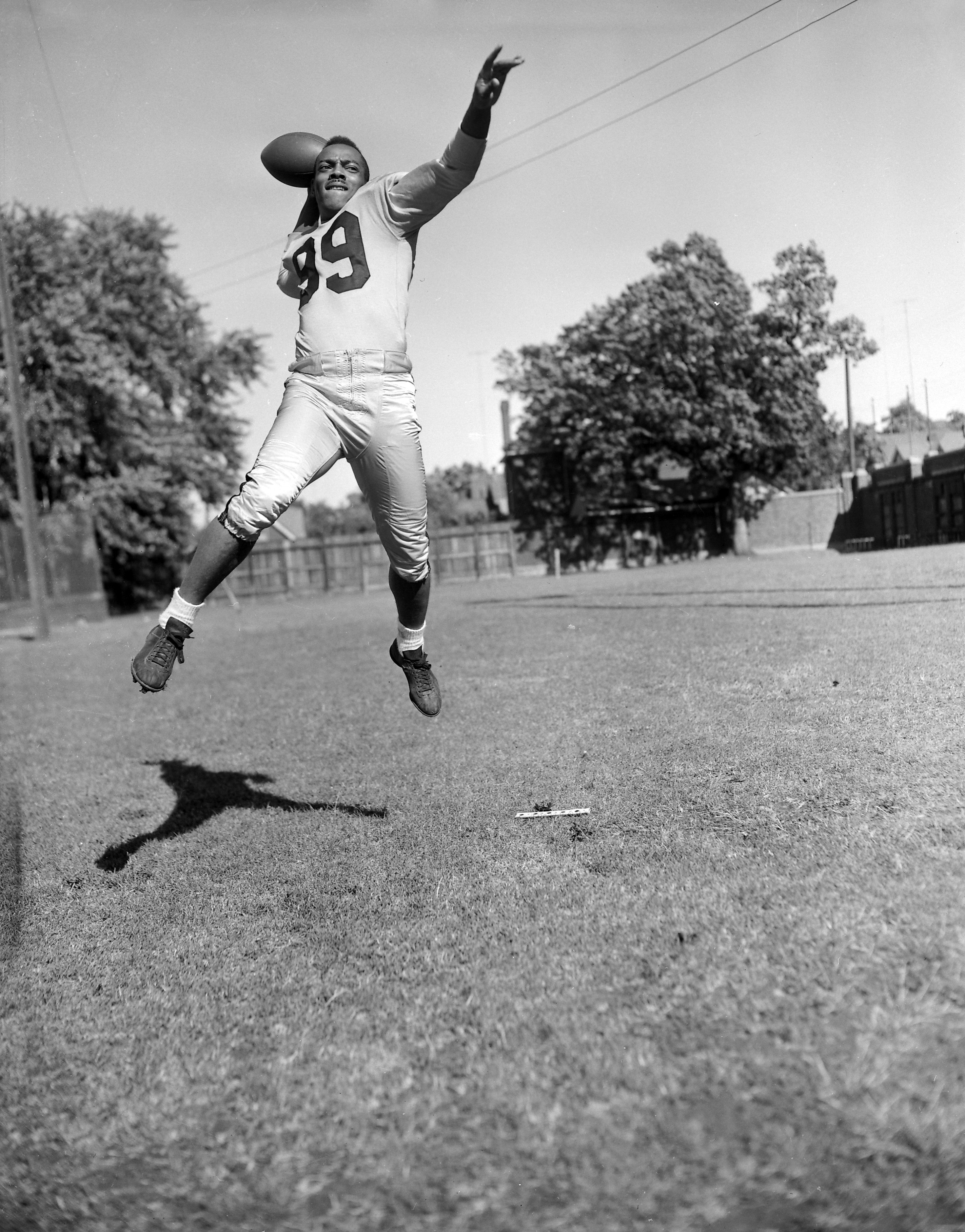 Before Robinson graduated to the Brooklyn Dodgers for his groundbreaking 1947 season, he spent a year with the team’s minor league club, integrating the International League. And in joining the Alouettes, Trawick reintegrated professional football, which had been all white since the 1920s, when bigoted National Football League owners successfully petitioned to remove pro-ball pioneer Fritz Pollard and several other black standouts from the league. With Trawick and Robinson breaking the same barrier the same year, Montreal was suddenly an avatar of racial tolerance.

Tolerance is a key concept here, because during his first winter north of the border, Trawick learned the city’s hospitality stopped short of full acceptance.

With Gridiron Underground: Black American Journeys in Canadian Football, James R. Wallen takes up the separate and unequal treatment Trawick received in late 1946, as the CFL playoffs ended and the Alouettes helped athletes find off-­season jobs. While team management guided most players into white-­collar jobs with long-term potential, they found the university-­educated Trawick a gig as a nightclub doorman.

“In his view,” Wallen writes, “other players — white players — seemed to have fared much better. . . . It wasn’t a question of money. . . . It was the nature of the job: there wasn’t much of a future in doormanship. He had a degree. To him it was menial work with undertones of racism.”

This passage, which appears thirty pages into Wallen’s book, sets up an important subtext that informs how we should read Trawick’s story and many others like it.

On one level, Gridiron Underground gives the CFL, which has roots that stretch back to the 1880s, long-­overdue credit for its unsung role in integrating professional sports in North America. The trailblazers of the 1940s and 1950s helped create the multi-billion-dollar industry we know today: if pro sports hadn’t integrated, the National Football League wouldn’t have become a cash cow generating $14 billion in revenue in 2017, and the thirty-­team National Basketball Association never would have grown popular enough to rack up $7.4 billion in revenue in 2017–18. And if you think the connection between integration and revenue is tenuous, ponder how many people would watch the NBA if a racist gentlemen’s agreement kept LeBron James and Stephen Curry sequestered in a segregated minor league.

When discussing Canada, black America, and the long relationship between them, it’s easy to portray Canada as a racial utopia, where acceptance is part of domestic policy and racism stops at the border. It’s harder and more honest to do what Wallen does in describing Trawick’s experience — and to depict the country as it really was and still is. For Trawick and other black CFL pioneers, Canada was less a promised land than a land of promise, where they earned opportunities unthinkable back in the United States. But it was also a place where racism shifted shapes. They may have left Jim Crow behind, but they came to understand the subtle yet unmistakable double standard of places like Montreal.

Wallen isn’t a sports specialist. He has previously written a pair of novels, Boy’s Night Out (1994) and Her Smoke Rose Up (1998), and produced several documentaries, including a film version of Gridiron Underground that aired on PBS two years ago. But making his latest book compelling doesn’t require an obsession with football itself. Instead it takes a deep interest in the men who uprooted their lives to play in Canada.

Wallen illustrates the evolution of sport on both sides of the border through Trawick and other early entrants, including Woody Strode and Ezzrett “Sugarfoot” Anderson. He also shows how NFL teams remained opposed to black players, even during attempts to reintegrate the league in the mid-1940s.

With Bernie Custis, who joined the Hamilton Tiger‑Cats out of Syracuse University in 1951, the focus narrows from integrating an entire league to breaking the colour barrier at a specific position. Pro-­football orthodoxy held that black players lacked the brains and leadership skills necessary to play quarterback, so giving Custis a chance was a sensitive and politically fraught decision. It was also an opportunity. In fact, the NFL’s racist refusal to employ black quarterbacks created a market inefficiency the CFL would exploit for more than twenty years.

That era began with Chuck Ealey, a quick-­footed, strong-­armed quarterback who went undefeated through high school and started at the University of Toledo for three years. As the 1972 NFL draft approached, Ealey and his agent made plain that, unlike other black quarterbacks coming out of college, he didn’t intend to switch positions to comply with the NFL’s unwritten racial code. That decision came at a steep cost:

Not one of the twenty-­six NFL teams in existence in 1972 deigned to draft Chuck Ealey. . . . Fourteen of those twenty-­six teams had losing records. Four hundred and forty-­two names were called over the course of seventeen rounds and not one of those belonged to Chuck Ealey. The Atlanta Falcons even had the audacity to waste a selection on one John Wayne out of “Fort Apache” State as a joke because their head coach, Norm Van Brocklin, had demanded that the scouts draft more “tough guys.”

Over the next two decades, the NFL’s entrenched stance would make quarterbacks like Ealey, and later Warren Moon and Condredge Holloway, a defining feature of the Canadian game. Their presence distinguished the CFL from the NFL as much as the broader fields, bigger footballs, and three downs. And as the pay disparity between the leagues widened, the CFL’s exclusive access to black quarterbacks created a forerunner of what baseball executives later called money ball. These athletes provided NFL-­quality play — but at prices CFL teams could afford.

At its best, Gridiron Underground zeroes in on turning points in the CFL’s relationship with African American talent and helps us know the men who made them happen. At times, however, Wallen betrays a less than nuanced understanding of racism as experienced by the people on the receiving end.

Consider the future CFL quarterback Warren Moon. Wallen describes the culture shock Moon experienced when, after grade 8, he was sent to an all-white suburban high school, instead of the school in his low-­income all-black neighbourhood:

Moon’s [fear was] straying into the patch of gangbangers, the source of so much black-on-black violence in West L.A. With his enrolment at Hamilton High, step one in the process had begun. There was, however, a trade-off. . . . Until the moment he entered the hallowed halls of Hamilton, Warren Moon had never come up against, or certainly never observed so closely, systemic racism.

Given that most criminals find their victims by proximity, and that Moon grew up in a racially segregated city, what Wallen describes here as “black-on-black violence” is simply violence. Labelling it “black-on-black” racializes crime and obscures the issue, unless you’re exploring the roots of the segregation that made interracial crime as rare as racially mixed neighbourhoods were in 1970s Los Angeles.

By the time Moon reached high school, he was familiar with systemic racism, even if he couldn’t name it as such. Systemic racism is what kept him in the ghetto, threatening to flatten the trajectory of his life long before he actually met many white people. But when a white coach promoted mediocre white quarterbacks ahead of Moon, rather than making a black player with transcendent talent the team’s on-field leader, that wasn’t systemic. It was a choice. More than favouritism, it was upfront, shameless bigotry, as distinct from systemic inequality as a ruptured tendon is from arthritis.

But such nitpicking misses the bigger point.

When the 2019 CFL season kicks off this month, three of the league’s nine teams will employ African American head coaches. That figure is both a record and a selling point for a league whose slogan is “Diversity Is Strength.” In contrast, consider that after the 2018 NFL season, the thirty-­two-team league counted just two black head coaches. In February, the Miami Dolphins hired Brian Flores, boosting that number to three.

The disparity is jarring, given the racial makeup of the two leagues and the countries in which they’re based. But it’s not shocking in the light of pro football’s long and uneasy relationship with racial equality. If you’re surprised to see the CFL outpacing the NFL in diversifying its coaching ranks, Gridiron Underground illuminates how we got here.