Food on the Move: Dining on the Legendary Railway Journeys of the World

The irony of my situation was not lost on me as the small plastic tray of dry food slapped onto the tiny table wedged against my chest on a recent flight from London. Folded on my lap was Food on the Move: Dining on the Legendary Railway Journeys of the World. As my mouth turned to the texture of blotting paper, I weighed my options: go hungry for several more hours or swallow both my culinary prejudice and the desiccated chicken. High above the Atlantic, I wished I could just travel by train.

To enjoy a spicy mutton curry and a cup of tea as the snow-­capped Himalaya Mountains pass by your window, or to eat prosciutto-­wrapped monkfish with warm bean purée aboard South Africa’s Blue Train, is to travel differently. A rail journey takes you from point A to point B in a way that focuses the attention on the act of travelling. It also gives you plenty of time to eat. Of course, there are often faster, more flexible options, but the train remains the most civilized by far. 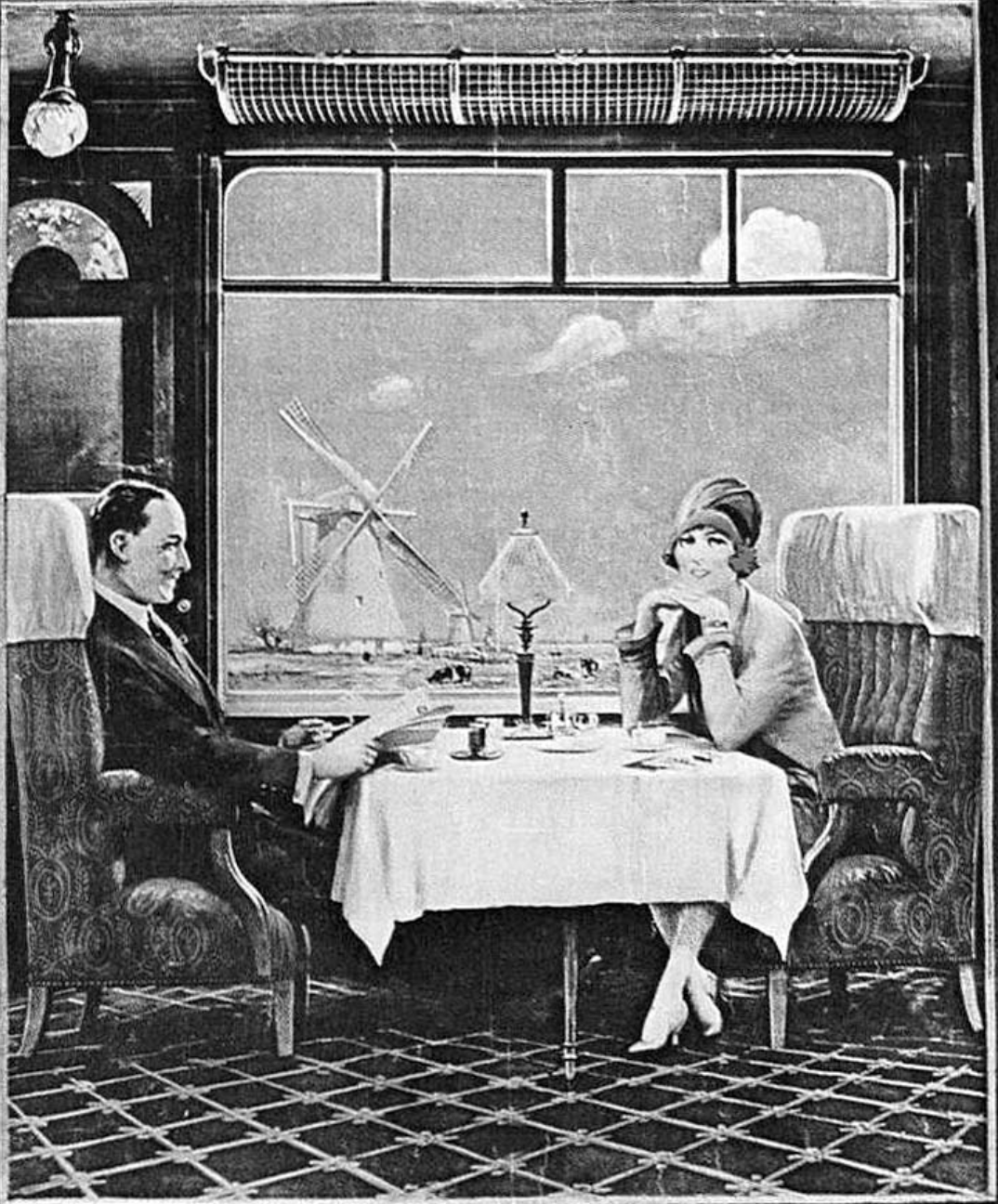 To dine on a train is to travel differently.
Image by Étoile du Nord / Wikimedia commons

I grew up in the southeast of England, and I spent many hundreds of hours travelling to London and further north by rail. After 1994, I was able to take the train under the English Channel to Paris, and onward to the mountains of southeast France or the canals of Venice. To this day, Britain remains an island criss-crossed by tracks, although frequent riders would likely dispute the notion that it’s a civilized way to get about, in overcrowded carriages that frequently run late. That’s not the kind of travel described in Food on the Move. This book of nine essays (and thirty-­six rail-­friendly recipes) describes legendary journeys on five continents, while taking a deep dive into the history of trains and the pleasures of food enjoyed on them.

The book is edited by Sharon Hudgins, who also contributes the chapter on the Trans-­Siberian Railway, on which she has logged over 65,000 kilometres. A professor and prolific food writer, she’s perfectly placed to understand and explain the joys and limitations of meals on the move.

Cost is one major limitation for train food. Another obstacle is the kitchen itself. The train kitchen is larger than the airplane galley, but it remains a challenge to send out plateful after plateful of top-­quality cuisine on even the most luxurious lines. The prep space is cramped (and rocking), the cars are narrow, storage and refrigeration are limited. Where comprehensive cooking facilities, such as stoves, do exist, there’s less space for the chefs themselves. Which is to say, the days of freshly baked bread and meals cooked entirely from scratch are over. On Via Rail’s Canadian — which travels between Toronto and Vancouver, through mercifully wireless-­free expanses — desserts and pastries are brought on board en route.

In his chapter on Britain’s best-­known train, the Flying Scotsman, Adam Balic gets quickly to the dry heart of the matter: even that simple, great British invention the sandwich can be turned into something entirely inedible when it comes to the modern railway kitchen. That’s not new, of course. Balic explains how the train sandwich became an object of national derision in the nineteenth century, lambasted by journalists and novelists alike. Anthony Trollope, for one, complained:

We are often told in our newspapers that England is disgraced by this and by that: by the unreadiness of our army, by the unfitness of our navy, by the irrationality of our laws, by the immobility of our prejudices, and what not; but the real disgrace of England is the railway sandwich, that whited sepulchre, fair enough outside, but so meagre, poor, and spiritless within, telling us that the poor bone whence it was scraped had been made utterly bare before it was sent into the kitchen for the soup pot.

All these years later, as the refreshments cart rumbles down the aisle, I cringe at the sandwiches, entombed in plastic wrap and languishing in all their pale glory, like a Dover sole on a sandbank. But the tea’s just fine.

Tea is one of the big attractions on the Darjeeling Himalayan Railway, the so-­called Toy Train because of its narrow gauge and diminutive carriages. In tracing the route’s extraordinarily complex history, Aparajita Mukhopadhyay explains how it’s now primarily a tourist experience — a steam-­powered UNESCO World Heritage site that offers a plethora of culinary choices, reflecting India’s cultural richness. Over the years, this short line has seen nearly as many dining options as the kilometres it covers (just eighty-­eight). There have been dining cars, which have come and gone (too expensive). Station refreshment rooms. Meals served to first-­class passengers in their seats. And a thriving culture of platform vendors, offering all sorts of traditional fare and black tea or chai through carriage windows. In 2001, a twelve-­seat dining car called Tenzing Norgay (after the Nepalese Sherpa who summited Everest alongside Edmund Hillary) was reintroduced. It offers one of the premier mobile dining experiences in the world, as affluent riders enjoy a four-­course menu while their tables climb very slowly into the Himalayas.

While the Toy Train might be among the shortest iconic rail lines in the world, Canada once laid claim to the longest. The Canadian Pacific Railway’s Pacific Express left Montreal’s Windsor Station on June 28, 1886, and covered the 4,655 kilometres to Port Moody, British Columbia, in just six days. CP would boast the world’s longest railway until the Trans-­Siberian line opened in 1916, and it featured dining cars from the outset. “After leaving Brandon,” wrote Elizabeth Spragge, a passenger that very first year, “we partook of our first meal in the dining car, where everything was well-­arranged and an excellent menu provided; including fresh salmon and other delicacies of the season.”

Following Confederation, railroads quickly knit Canada together. Many branch lines linked the smaller towns to the big ones, explains Judy Corser in “Sockeye Salmon and Saskatoon Pie,” and to the country’s two transcontinental lines: Canadian Pacific, which operated a southerly route, through places like Brandon, Manitoba; and Canadian National Railway, which ran a more northerly one, via Winnipeg and Edmonton.

It is no exaggeration to say that these lines made Canada what it is today. They brought tourists to the interior, for one thing, which led to the country’s first national park at Banff and to the great railway hotels of Banff Springs and Chateau Lake Louise. CP also encouraged immigration to the Prairies. Both lines provided employment for thousands of people who provisioned the trains — from thirteen First World War experimental farms across three provinces to the many commissaries that supplied linen, uniforms, tableware, baked goods, and fresh meat, fruit, and vegetables.

The Great Western Railway of Canada, a regional line in Ontario, was the first in the world to buy George Pullman’s hotel car, a precursor to the dining car, in 1867. Nicknamed the President, it carried enough food, wine, and other essentials for a four- to seven-­day journey. Within a year, Corser writes, Canadian trains began to include proper dining cars:

The railways cut through huge swaths of farmland, a breadbasket that gave back for a price.

Preparing and serving food on the move has always been expensive. And while elegant linen tablecloths and fresh seasonal ingredients endure on the Canadian — which recently featured veal chops with Cajun-­style spices and pan-­seared duck breast at dinner, paired with wines from Ontario and British Columbia — they’re enjoyed mostly by visitors from other countries, which is a pity. As Corser points out, the majority of Canadian families who take the storied route today do so in economy class, where they bring their own plastic-­wrapped sandwiches or eat in the Skyline snack car, which is something like a bus station newsstand on steel wheels.

The Canadian National Railway may celebrate its hundredth birthday this month, but the golden age of rail travel and the cuisine that went with it are a long way back down the line. When Via Rail assumed responsibility for passenger services across the country, in 1978, both CN and CP became primarily freight rail companies, and lunch boxes largely supplanted dining cars.

Reading Food on the Move while flying back from London made me wistful. Tucked into my tiny seat, too close to the passenger next to me, I recalled my journeys across France. As a student in my early twenties, I’d regularly leave my Paris law firm after work on a Friday to hop on a high-speed TGV train, toward a weekend of skiing in the Alps. As much as I remember the delicious anticipation of reaching the mountains, I also recall the croque monsieur from the snack car, a meal that filled my stomach and fit my budget. While most French would no more buy food on a typical train than I would consume a British railway sandwich, I salivate at the thought of that deliciously creamy concoction, packed with béchamel sauce, melted cheese, and smoky ham.

Today, more and more of us are stuck with the dry chicken at 30,000 feet. But the contributors to Food on the Move — having enjoyed culinary delights and that familiar clackety-­clack from Australia’s Ghan to the Orient Express and Trans-­Siberian Railway — remind us a better way really does still exist.